U.S. District Court Judge David Hittner in Houston set a Jan. 13 sentencing date for Dean, who remains free on bond. Dean faces up to five years in prison without parole and up to $500,000 in fines. Three other former El Paso traders who were charged with Dean are expected to plead guilty next week, said U.S. Attorney Michael Shelby.

All of the men that have been charged waived having their cases presented to a grand jury, and Shelby said all have agreed to cooperate in the ongoing investigation into price manipulation in the energy industry. Dean pleaded guilty to reporting false information to the Platt’s publication Inside FERC in 2000.

As many as a dozen former El Paso traders and supervisors apparently received letters from the U.S. Attorney’s Office earlier this year that informed them they faced charges of manipulating gas prices. Shelby said the investigation is continuing. 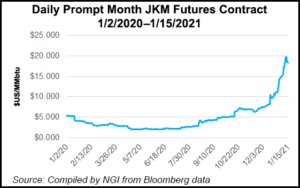 The rally in Asian natural gas prices has finally lost momentum as temperatures have warmed and supplies are creeping up across the region. Spot prices fell below $10.00/MMBtu on Monday as the February contract gave way to March delivery. The decline followed a rapid climb from late November through last week when Japan Korea Marker…