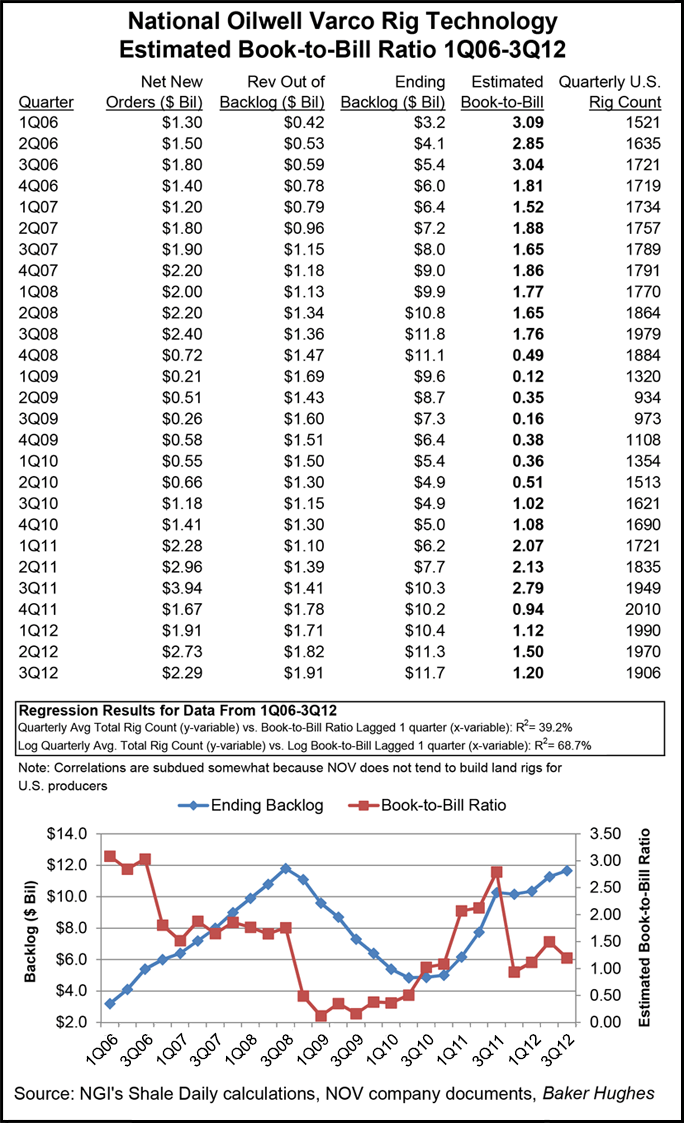 Revenue for NOV’s biggest business, which is in supplying rig technology, jumped 29% from a year ago and the business backlog revenue climbed 36% to $1.91 billion.

However, North American onshore demand declined sharply from a year ago, largely because of the slowdown in natural gas drilling, but also because of customers aren’t ordering much but instead using their own backlogs of onshore equipment, said CFO Clay Williams during a conference call.

“Demand for deepwater offshore is high and rising…international is pushing higher, but the headwinds have intensified in North America, which is moving downward, with natural gas and oil affected,” he said. Canada’s onshore also has been “tepid…

“All across North America, everybody’s hesitating. A new parsimoniousness is sweeping through the complex…” However, “we are hearing ‘drill, baby drill’ overseas…After a “doubling of the rig count in U.S. production, we are now facing the world with North America playing defense while the rest of the world plays offense…

“Offense is fun. Defense, not so much,” he said.

North America’s pressure pumping market, said the CFO “is facing an oversupplied market, and our customers have cut their orders to about zero…Day rates are relatively firm but contracts have fallen to well-by-well lately…Most domestic drillers seem unwilling to build new rigs without better clarity…and the backlog has declined.”

In the United States, NOV recorded a 9% drop sequentially in sales, “notably drill pipe…with customers relying on their existing stock of drill pipe,” said Williams. “The backlog for most products [in the United States] declining points to a difficult quarter ahead…”

There also was “little benefit” from the spring breakup in Canada, he said, with overall Canadian revenues 4% lower.

The final three months of this year are expected to be ‘flat to down slightly from the third quarter due to declining North Americans sales.”

Williams explained that “theories abound” about what’s happening in North American drilling. He said he’s heard several things, including that “companies have burned through their budgets and are waiting for 2013, or that after outspending over the past few years they now are unwilling to further strengthen, or that they don’t think crude oil will stay high, or that there’s going to be a sovereign meltdown overseas…

“With natural gas trending up, we are surprised that North American activity isn’t more robust. But we are optimistic that this is transient…” With “improving economics” for exploration and production companies, “it should be improving soon.”

Meanwhile, the “deepwater is very bright, driving day rigs and new economics higher,” Williams said. “Offshore drillers are smiling and we expect a solid quarter in the fourth quarter following a solid quarter in the third. The strength of dayrates in the third quarter supports this thesis that the world has and will continue to build out deepwater capability well into the 21st Century.

“More recently we’ve seen a sustained interest in newbuilds” for the deepwater, and “shipyards are underemployed and hungry on pricing. Capital is available and cheap, and production time is approaching zero for customers. Deepwater customers have growing confidence in what we hope is a new era.”

NOV tracks its backlogs of orders internally, Williams explained. During the latest quarter U.S. “backlogs dropped 10-30% in the quarter…We saw a solid level of drilling in the U.S. last week, but customers can now cut purchases and use their own inventory of consumables if they so desire. That’s what we feel customers are doing now, hunkering down…It will take a toll on margins in the fourth quarter.”

During the quarter the highly acquisitive company said it would pay $2.54 billion to buy Robbins & Myers Inc. to expand its product offerings for well tools, pumps and valves.

In 3Q2012, NOV’s total backlog for capital equipment orders within the rig technology segment was $11.66 billion, up 3% sequentially from 2Q2012. Most of the backlog gains were for deepwater equipment, as well as overseas orders.

The book-to-bill ratio for NOV represents the amount of additions to the backlog divided by the amount of revenue that was booked from backlog during that same period. While the ratio itself will not explain 100% of the changes in backlog from period to period because it does not incorporate things such as turns business (orders taken and filled in the same period), cancellations and order push-outs, book-to-bill ratios above 1.00 generally indicate that backlog grew during the measurement period.

Revenues for petroleum services and supplies business fell 3% sequentially but were 18% higher than a year ago at $1.72 billion. Operating profit was $383 million, or 22.3% of revenue, which was up 28% from a year earlier. Operating profit flow-through was 33% from the year-ago period.