Eversource Energy has withdrawn from consideration its petition for a 20-year contract with Algonquin Gas Transmission LLC (AGT) for natural gas capacity through the proposed Access Northeast pipeline upgrade project, and plans to submit an updated proposal, according to documents filed with the New Hampshire Public Utilities Commission (PUC). 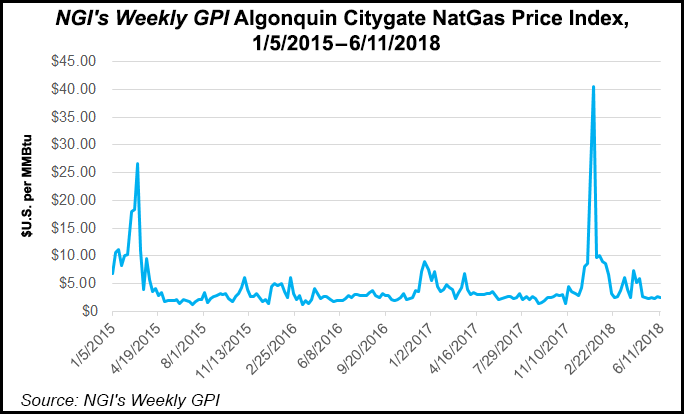 The announcement Monday follows a Supreme Court of New Hampshire order last month that reversed a 2016 PUC decision, which blocked Eversource’s plan to use electricity rates to pay for constructing Access Northeast. The project would add 900,000 Dth/d and additional liquefied natural gas (LNG) storage to the AGT system.

“We hold that the PUC erred in dismissing Eversource’s petition as a matter of law,” according to the high court, which reversed the PUC’s dismissal and remanded the case to the agency.

In October 2016, the PUC refused to approve a 20-year transportation and storage capacity contract between the Spectra Energy pipeline and Eversource Energy, with costs to be borne by ratepayers. Eversource, the pipeline and other supporters of the capacity agreement had argued that the statute enabling electric utility restructuring in the Granite State is intended to lower energy prices.

Eversource and supporters said electric distribution companies’ (EDC) purchase of natural gas transportation and storage capacity to be used by power generators would further that cause.

Opponents of the Eversource proposal argued that the restructuring statute’s most important objective was to get the EDCs out of the power generation business completely, and that the proposed capacity contract and the release of capacity to wholesale power generators were preempted by the Federal Power Act and the Natural Gas Act.

In light of the court’s decision, Eversource said Monday it “has temporarily withdrawn the original Access Northeast gas capacity agreement and intends to refile a revised application that best serves the interest of customers.

“The need for additional gas capacity in New England is more acute today than it was at the time Eversource filed the original application, with the region incurring $1.7 billion of additional costs due to the lack of sufficient access to low-cost natural gas this winter. To help ensure Eversource customers are not exposed to these unnecessary costs, the parties to the contract will modify the two-year-old proposal.”

Concurrently, Eversource also asked the PUC to vacate its 2017 dismissal of a power purchase agreement with Hydro Quebec that would have brought the area 100 MW from the Northern Pass hydroelectric transmission project.

The court “has clearly determined that reducing energy costs to customers was the legislature’s primary intent in restructuring the state’s electric utility system,” according to Eversource President Bill Quinlan. “The PUC’s decisions were out of step with that intent.

“Both of our proposals were focused on providing savings to customers, by reducing high and volatile electric prices caused by natural gas constraints and by guaranteeing that New Hampshire received its fair share of direct benefits from the Northern Pass project. We look forward to pursuing options for accomplishing that goal.”

In light of the state Supreme Court decision, Eversource said it would revisit the PUC’s denial of a 2016 power purchase agreement with Hydro Quebec that would have brought the area 100 MW from the Northern Pass hydroelectric transmission project.

AGT is an affiliate of Spectra Energy, which merged with Enbridge Inc. in 2017. Access Northeast is sponsored, along with Spectra, by New England’s two largest utilities: Eversource and National Grid USA.