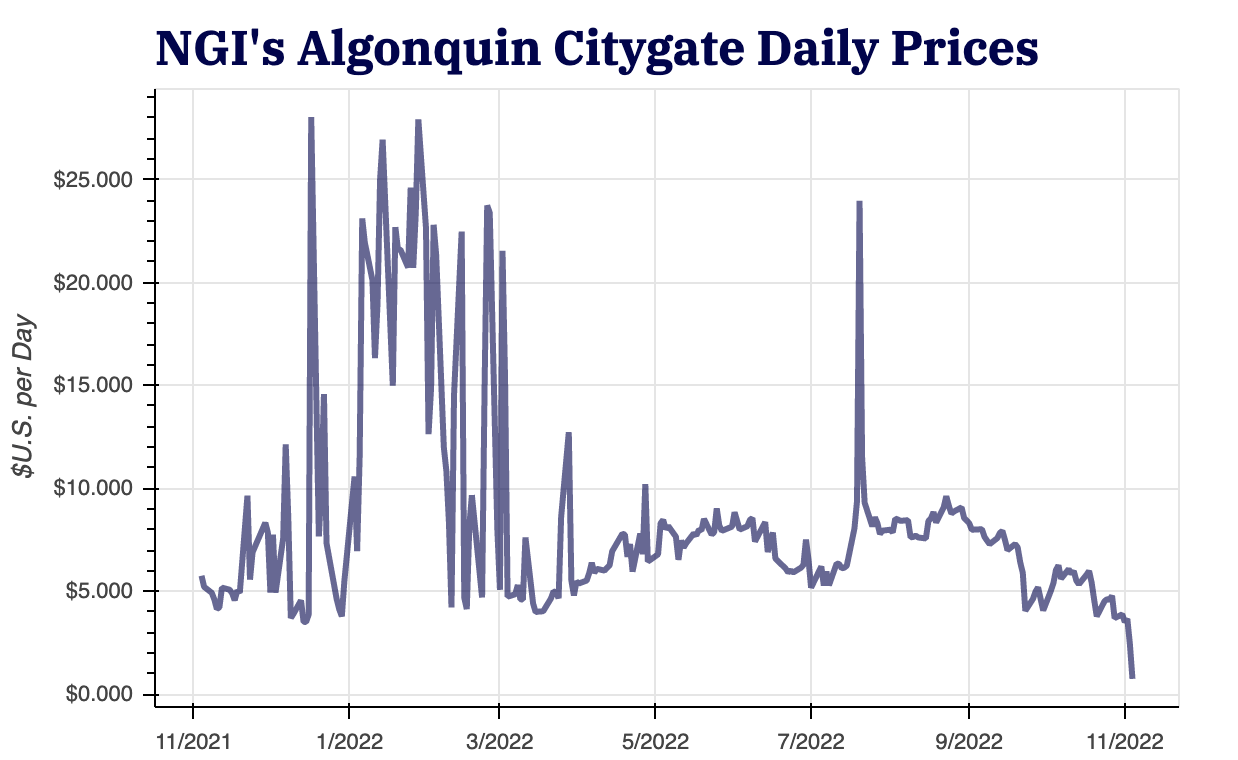 New England, which lacks the natural gas pipeline infrastructure to fill out its demand, relies on LNG shipments to its three liquefied natural gas import facilities on “foreign flagged vessels,” CEO Joseph Nolan said. “However, because of the war in Ukraine, LNG imports are not available…in the volumes necessary to meet this winter’s needs without causing further stress on European markets and the American economy.”

What’s more, Nolan said that any added reliance on “foreign-sourced natural gas poses a particular national security threat at this time given the war in Ukraine.”

If the region’s generators would be “forced to increase their reliance on foreign-sourced natural gas – if that is even possible – it will exacerbate well-documented shortages in Europe,” the CEO noted.

What’s more, “from a national security perspective, it will put upward pressure on prices in the international market for natural gas. As a major gas supplier, Russia will directly benefit from higher prices, and that in turn threatens to subsidize the Russian military and prolong the war in Ukraine.”

Citing ISO-NE and the Federal Energy Regulatory Commission, Nolan warned that “New England will not have sufficient natural gas to meet power supply needs for the region in the event of a severe cold spell this winter.

Citing deep concerns about the potential impact of a winter energy shortfall on the region, the CEO called on Biden to waive the Jones Act of 1920.

The Act has posed a constraint on LNG supply for the region, as it mandates that all goods shipped between U.S. ports must be transported by U.S. flagged vessels. Such vessels must be built, owned and operated by U.S. citizens, or permanent residents.

At the time, DHS noted that in 2020, Congress eliminated the federal government’s authority to issue long-term comprehensive waivers, except in circumstances where a waiver is required to “address an immediate adverse effect on military operations.” Waivers that do not meet that standard must be reviewed on a case-by-case basis.

That said, this is not New England’s first call on the executive branch to waive the Act.

As natural gas prices at the Algonquin Citygate – the ​​trading hub and benchmark for natural gas prices in New England – reached their summer peak of $23.970/MMBtu after Russia’s announcement of maintenance on the Nord Stream 1 pipeline sent Europe clamoring for U.S. LNG, governors from New England pushed DOE Secretary Jennifer Granholm to begin exploring “the conditions under which it might be appropriate to suspend the Jones Act…

“While our immediate focus is on this upcoming winter, the ramifications of Russia’s invasion and the realignment of natural gas supplies will have long-term global consequences and could have adverse impacts in New England,” the region’s governors wrote in a letter to Granholm. “While our region has been building an energy strategy to reduce our reliance on imported fuels, we must accelerate those efforts. We would like to work with you on expanding on this energy strategy and building the critical infrastructure to support the plan.”

Eversource’s Nolan, like the New England governors, also pressed Biden to issue an emergency order under the Natural Gas Policy Act of 1978, “if the President determines that there is a severe natural gas shortage (or imminent such shortage).”

The Natural Gas Policy Act also grants the president the ability to order natural gas to be freed from boilers to protect high priority uses. The president may also order user-owned natural gas to supply high-priority requirements in the event natural gas from interstate pipelines has been utilized to the maximum extent practicable.

Additionally, the CEO suggested the Biden administration take measures through an emergency order under the Federal Power Act to authorize the DOE Secretary to order electric service connections to facilities in the event of an emergency.

The potential for a natural gas shortage in the event of a “severe cold spell this winter” aside, New England electric and natural gas customers are “already experiencing skyrocketing electricity and gas costs given supply constraints and global price pressure,” Nolan noted.

The U.S. Energy Information Administration (EIA) in its 2022 Winter Fuels Outlook noted that “Wholesale [electricity] prices are highest in the Northeast, with prices in the ISO-NE market averaging $96/MWh during the first nine months of 2022,” double the 2021 average.

As for natural gas, households heating with the fuel in the Northeast may expect to spend about $1,094 from October through March this year, a 23% year/year increase, according to EIA.

Earlier this year, Eversource filed for a natural gas supply rate increase, as did several New England utilities, with the Massachusetts Department of Public Utilities (DPU). The proposal received the stamp of approval from regulators, and rates went into effect on Nov. 1, according to DPU filings.

“The need for action now is compelling,” Nolan said. “Many of the solutions require advance planning because they may require actions by regulators, finding new resources, chartering vessels, arranging for additional fuel deliveries, and other yet to be identified extraordinary actions.

“At a minimum, Secretary Granholm should convene a group that includes: the federal agencies that have relevant emergency authorities, the region’s governors and electricity regulators (who could play a role in supporting energy conservation measures that could work in parallel with the federal emergency authorities), ISO-NE, LNG terminal operators, the power generators that supply the region, fuel suppliers, and the utilities to whom customers look in the first instance for reliable supplies of electricity.

“Eversource stands ready to support and participate in such efforts,” Nolan said.