EV Energy Partners LP (EVEP) said it plans to cut its capital expenditures (capex) by 40% this year and is “accelerating” the sale of its stake in Utica East Ohio (UEO) midstream, but the company will delay selling some of its acreage in the Eagle Ford and Utica shales due to low oil and natural gas prices. 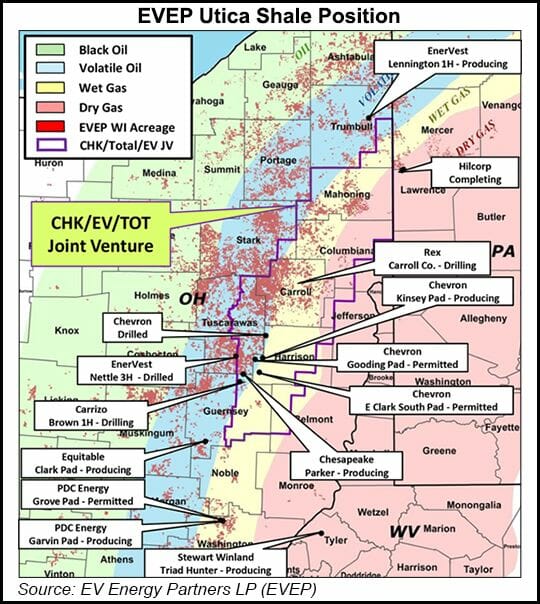 During a conference call Monday, EVEP Executive Chairman John Walker said most of the master limited partnership’s (MLP) acreage is already held by production, so there isn’t a significant inventory of wells that need to be drilled. Walker added that the proceeds from a sale of its 21% interest in the UEO midstream processing complex would be redeployed into long-life producing oil and gas properties (see Shale Daily, Nov. 4, 2014).

“With regard to acreage monetization in the Utica and Eagle Ford, we believe that with the current price environment it’s prudent to delay that process until the outlook for commodities prices is more settled,” Walker said. “However, we’re exploring alternative structures with third parties to provide additional capital to drill undeveloped acreage and increase cash flow.”

According to EVEP’s last investor presentation in December, the MLP holds 173,000 net working interest acres, and an overriding royalty interest on 880,000 gross acres, in the Utica Shale. In the Eagle Ford, EVEP sold its formation rights in Texas’s Burleson, Brazos and Grimes counties to an undisclosed buyer for $30.6 million; it retained the rights to about 14,000 net acres in Fayette, Lee and Washington counties.

Walker and other EVEP executives said additional details would be presented during the MLP’s 4Q2014 earnings call in four weeks.

EVEP said it expects its 4Q2014 production to average approximately 171 MMcfe/d, a decrease of 2.7% from the third quarter. The company said its quarterly production in West Virginia was down an average 1.9 MMcfe/d due to a compressor change-out program.

Walker said the current merger and acquisition (M&A) environment for oil and NGLs is still “unstable.”

“I’ve seen seven of these over the last 40 years,” Walker said. “They all typically go down further and faster than anybody believes, but the shape of all of them have been a ‘V.’ Once prices stabilize, we’ll see a very good market.

With no major changes to the weather outlook overnight, and with traders awaiting the latest government inventory data to get an updated read on balances, natural gas futures were trading slightly lower early Thursday. The April Nymex contract was off 2.5 cents to $2.791/MMBtu at around 8:45 a.m. ET. Predictions ahead of today’s Energy Information…