EV Energy Partners LP (EVEP) said it plans to reduce the number of rigs it has deployed in the Barnett Shale from three to one during the first quarter of 2015, and defer drilling in the Austin Chalk formation in Central and East Texas as it continues to shop for a buyer of its 21% stake in Utica East Ohio (UEO) midstream. 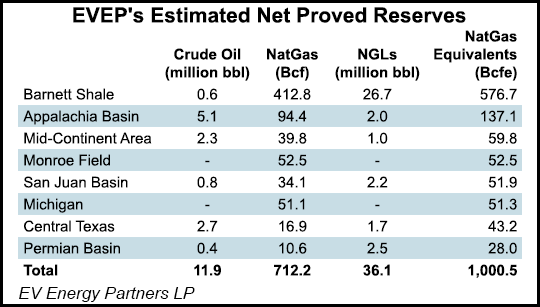 During a conference call Monday, EVEP Executive Chairman John Walker repeated last month’s message that the Houston-based master limited partnership (MLP) would delay selling some of its acreage in the Eagle Ford and Utica shales until commodity prices recover (see Shale Daily, Feb. 3). But the MLP has also hired an investment bank to help facilitate a sale, which Walker indicated was a top priority.

“We feel like this is going to be an extremely good year,” Walker said. “I’m spending a very significant amount of my time on the sale of UEO. It’s a major thing that I’m working on, and I feel good about our progress to date.”

CFO Nick Bobrowski added that any UEO sale would likely have a taxable impact on EVEP. “We’re looking at some potential structures for a lifetime exchange, but it’s very difficult to do with a partnership interest and would take quite a bit of structuring,” Bobrowski said. “I think the assumption should be that UEO is likely to be a taxable event, but we are looking at some structures to try to either reduce the tax or defer it.”

Bobrowski said EVEP’s investment to date in UEO is $294 million.

Last month, the MLP said it planned to spend $55-65 million on exploration and production capital expenditures (capex) in 2015. On Monday, CEO Mike Mercer said EVEP’s largest capex program in 2014 was the Barnett, where it spent about $59 million to drill 80 gross wells. He added that in late 4Q2014 the MLP’s team in the Barnett turned 26 wells into production, with an average initial production 8% better than budgeted.

But Mercer said low commodity prices were forcing EVEP to cut its rig count in the Barnett, with the partnership now planning to only drill wells with an estimated ultimate recovery exceeding 5 Bcf. EVEP also plans todefer any further drilling in the Austin Chalk, even though in 4Q2014 it drilled and turned into production two A-zone wells that came online at 750 boe/d.

Estimated net proved reserves at the end of 2014 totaled 1.00 Tcfe, about 71% of which were natural gas, 22% NGL and 7% crude oil. The year-end total for 2014 had declined by 191 Bcfe from 2013, primarily due to a reduction in proved undeveloped reserves. The partnership said 84% of its proved reserves were classified as proved developed.

According to EVEP’s investor presentation from December, the MLP holds 173,000 net working interest acres, and an overriding royalty interest on 880,000 gross acres, in the Utica Shale. In the Eagle Ford, EVEP sold its formation rights in Texas’s Burleson, Brazos and Grimes counties to an undisclosed buyer for $30.6 million; it retained the rights to about 14,000 net acres in Fayette, Lee and Washington counties.