President Obama’s decision to normalize relations with Cuba could have an impact on offshore drilling in the eastern Gulf of Mexico (GOM), where for more than a decade the island nation and several foreign energy companies have tried — and, so far, failed — to drill a commercially viable well for oil and natural gas. 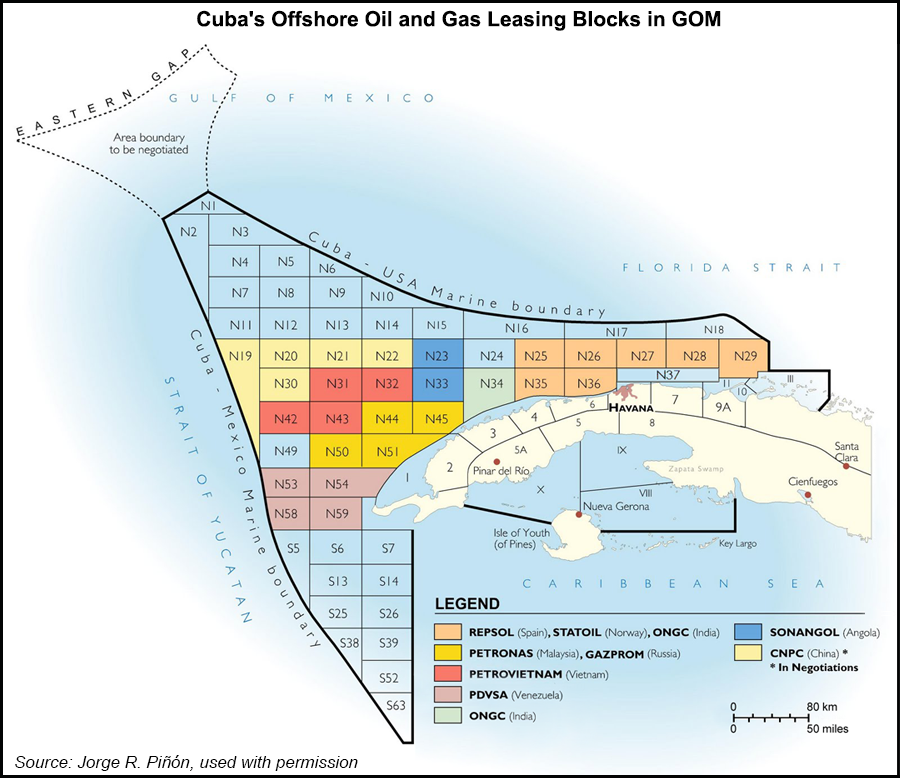 The White House said Wednesday that the United States would seek to begin talks with Cuba and Mexico over unresolved maritime borders in the GOM.

“Previous agreements between the United States and Cuba delimit the maritime space between the two countries within 200 nautical miles from shore,” the White House said. “The United States, Cuba and Mexico have extended continental shelf in an area within the GOM where the three countries have not yet delimited any boundaries.

“The United States is prepared to invite the governments of Cuba and Mexico to discuss shared maritime boundaries in the GOM.”

Cuba and the United States signed a treaty — officially, the Cuba-United States Maritime Boundary Agreement — in 1977 (see Daily GPI, Jan. 25, 2008). Although the U.S. Senate never ratified the treaty, both countries have maintained the boundary that was agreed upon in the document.

How Much Oil Does Cuba Have?

According to a country analysis note by the U.S. Energy Information Administration (EIA), Cuba produced 51,000 b/d of oil in 2012 — not enough to even meet one-third of the country’s demand of 171,000 b/d. Imports from its regional ally Venezuela made up the shortfall. As of January 2013, Cuba held proven crude oil reserves of 124 million bbl.

“The prospects of finding oil in the deep waters off the northern coast of Cuba attracted many oil and gas companies from around the world. However, offshore deepwater exploration activity has yielded unsuccessful results,” the EIA said. The agency’s note on Cuba was last updated in November 2013.

“Cuba’s oil industry, such as it is, is completely irrelevant,” Molchanov told NGI on Friday. It’s immaterially small in the context of the global oil market, and that is not going to change, regardless of relations with Washington. It has nothing to do with politics. It’s simply that the resource base is not there.”

Citing information from the Oil and Gas Journal, the EIA said Cuba has 310,400 b/d of collective processing capacity from four refineries on the island, all of which are owned by the state oil and gas company, Cuba Petroleos. The refineries, Nico Lopez, Ermonos Dias, Cienfuegos and Serhio Soto, are located in Havana, Santiago, Cienfuegos and Cabaiguan, respectively.

Drilling Off Cuba a Failure So Far

In a policy paper to Congress on July 31, Mark Sullivan, specialist for Latin American affairs for the nonpartisan Congressional Research Service (CRS), said Cuba “suffered setbacks” in 2012, after three foreign oil companies made unsuccessful attempts at finding oil off the northwestern coast of Cuba.

According to Sullivan, Spain’s Repsol YPF SA — in a consortium with Norway’s Statoil ASA and India’s Oil and Natural Gas Corp. Ltd. (ONGC) — drilled an exploratory well in late January 2012 using an oil rig named the Scarabeo-9. The rig was owned by Saipem S.p.A., a subsidiary of Italy’s Eni S.p.A. Repsol announced on May 18, 2012 that the well had come up dry, and the company subsequently left Cuba in 2013.

Sullivan said Malaysia’s Petronas, in cooperation with Russia’s Gazprom, used to same Italian rig to try to find oil in late May 2012, but the result was ultimately the same — Cuba said on Aug. 6, 2012 that the exploratory well drilled by Petronas “was found not to be commercially viable because of its compact geological formation.”

Venezuela’s national oil and gas company, Petróleos de Venezuela S.A. (PDVSA), announced in September 2012 that it had started looking for oil, but on Nov. 2 of that year Cuba made the same announcement that the well “was not commercially viable,” according to Sullivan.

“As a result of the three unsuccessful wells in 2012, the Scarabeo-9 oil rig left Cuba in November 2012,” Sullivan wrote to Congress. “Most observers maintain that the failure of the three wells was a significant setback for the Cuban government’s efforts to develop its deepwater offshore hydrocarbon resources.

“Some oil experts maintain that it could be years before companies decide to return to drill again in Cuba’s offshore [deep waters].”

Molchanov concurred. “Foreign oil companies outside of the United States have had access to Cuba for a long time,” he said. “And only a few of these companies, such as Repsol, have chosen to pursue this exploration opportunity. That tells us all we need to know about how the industry views drilling in Cuba.”

But the most timely point, Molchanov said, is that oil and gas companies across the world have been reducing capital expenditures because of the meltdown in world oil prices.

“Embargo or no embargo, that basic picture just does not change.”

In a separate policy paper in 2012, Sullivan and the CRS shared with Congress a detailed map of Cuba’s offshore lease blocks that was created by Jorge R. Piñón, who currently serves as director of the Latin America and Caribbean Energy Program at the Jackson School of Geosciences, at the University of Texas at Austin. According to Sullivan and the CRS, Piñón presented the map at a conference in October 2010, but it was subsequently updated by CRS.

CRS said Brazil’s Petroleo Brasileiro S.A. (Petrobras) signed an agreement with Cuba to explore block N37 in October 2008, but they withdrew in March 2011. Meanwhile, China National Petroleum Corp. (CNPC) has reportedly been in negotiations for blocks N19-22 and N30.

Piñón’s findings also appear in the 2010 book, “Cuba’s Energy Future: Strategic Approaches to Cooperation,” which was edited by Jonathan Benjamin-Alvarado. In that book, Piñón said Cuba awarded Repsol (40% working interest) its blocks in 2002, followed by its consortium partners, Statoil (30% WI) and ONGC (30% WI), in 2005. ONGC was awarded its own blocks in 2006, as was Petronas. PDVSA and PetroVietnam followed in 2007.

There has been new activity this year. According to Sullivan, on July 11 Russia’s Rosneft and JSC Zarubezhneft signed an agreement with Cuba’s national oil company, CubaPetroleo (Cupet). That deal was “reportedly for the same exploration block that Petrobras had been involved in,” Sullivan said. “Some observers are skeptical about the prospects for the project.”

The EIA concurred. “Russia’s Zarubezhneft decided to postpone drilling until 2014 after experiencing technical difficulties while drilling,” the agency said in its note. “Geological and technological challenges have limited rig operations in the area.”

In the wake of the Deepwater Horizon incident in 2010, both CRS reports addressed concerns raised by some members of Congress over the possibility of an oil spill in the eastern GOM from a well in Cuban waters.

“If an oil spill did occur in the waters northwest of Cuba, currents in the Florida Straits could carry the oil to U.S. waters and coastal areas in Florida, although a number of factors would determine the potential environmental impact,” Sullivan said in this year’s CRS report. “If significant amounts of oil did reach U.S. waters, marine and coastal resources in southern Florida could be at risk.”

Sullivan added that the final report by the National Commission on the BP Deepwater Horizon Oil Spill and Offshore Drilling, released in January 2011, said it was “in the U.S. national interest to negotiate with [Mexico and Cuba] to agree on a common, rigorous set of standards, a system of regulatory oversight, and operator adherence to an effective safety culture, along with protocols to cooperate on containment and response strategies in case of a spill.”