Market participants hoping for sustained natural gas prices above $3/MMBtu may have to keep hoping, because the fundamentals suggest it’s not going to happen, not even under the “craziest scenario,” according to Drillinginfo’s Bernadette Johnson.

What’s more, Johnson, vice president in charge of the Austin, TX-based firm’s market intelligence, told attendees at the 2019 Oil & Gas Investment Symposium (OGIS) in New York City Monday that the global crude oil market has more slack than recent balances imply and that prices have climbed “too high too soon.”

Even under outlier scenarios natural gas doesn’t stay above $3 for long, she said.

The force likely to contain prices in Drillinginfo’s outlook is the same underlying force that sent spot prices in West Texas deep into the negatives last week — associated gas growth from the Permian Basin.

Along with the gas-focused giants in the Northeast, the Marcellus and Utica shales, the crude-focused Permian will be one of the main drivers of natural gas production growth moving forward, according to Johnson. This is after accounting for the “push to live within cash flow” that has led to reduced activity for exploration and production companies.

RBN Energy LLC recently made a similar prediction for robust natural gas production growth from crude-focused plays over the next five years, a trend that could “wreak havoc” on gas markets.

“Five years ago, six years ago, the Permian wasn’t really a player” in terms of gas production, Johnson said. “This associated gas coming out of the Permian is so dramatic…that it is effectively going to keep a lid on pricing for natural gas. Prices for gas have been below $3 for a long time. They’re going to stay below $3…

Johnson further noted that, if anything, Drillinginfo’s Permian production estimate could be too conservative.

“If any of these numbers, if there’s risk around them, it’s probably on the supply side, and we might be conservative predicting natural gas supply,” she said.

All this isn’t to say that Johnson’s team is particularly bullish on crude prices either. The recovery that has seen West Texas Intermediate prices back well above $60/bbl is “probably too high too soon.”

“Just last quarter, we were more oversupplied in 4Q2018 than we were when prices collapsed back in 2014,” with an overhang of 2.2 million b/d, Johnson said. “I don’t think that’s widely recognized by the market. So why are prices $63 today?”

A lot of it has to do with cuts by OPEC, aka the Organization of the Petroleum Exporting Countries, she said. The overhang from the fourth quarter shrank to 700,000 b/d in the first quarter, but there could be more supply available than what recent balances suggest.

Based on the recent peak output rates from countries producing currently, there’s about 3.1 million b/d of spare capacity in the market, according to Johnson.

“That means if there is a disruption, and there will be, we can meet it pretty quickly. So there is another strong data point for us that says, if Libya loses 1 million b/d, we can fill that gap…It means this is going to keep a pretty effective ceiling on prices,” Johnson said. “If we have 3.1 million b/d of spare capacity, then should we have $70 or $80 prices? Probably not. The way we look at this, even the 700,000 b/d oversupplied market we’re in today, it’s kind of artificial.

“It’s because OPEC made those cuts. Are they going to continue to lose market share, continue to make cuts? Probably not. We’re going to see some cheating. We can’t sustain this forever. So when we look at a market that’s artificially in balance it means there’s a lot more risk to the downside for pricing than there is to the upside.”

As for the congestion that has pressured natural gas prices lower in the Permian, some relief should come later this year as new pipeline capacity hits the market. However, based on the current slate of proposed projects, some analysts have suggested that the market could be overbuilding. There’s also the question of where the pipes that do get built will go with all this associated gas and whether there’s a market for it, according to Johnson.

“That’s a lot of pipe, and it looks like we’re overbuilding,” Johnson said. “Some of those may not happen, and then it’s going to come down to where are they going? Do we need 6 Bcf/d in Agua Dulce in South Texas? No, because Mexican demand is not growing that fast. So this is going to be all about where they actually land.

Only so much Permian gas can go south of the border into Mexico.

“It’s not going to be this infinite market where we can continue to send all this Permian production,” Johnson said. “It’s going to have to go other places as well.”

That could be where liquefied natural gas (LNG) exports come in, but even the global market has its limits. Drillinginfo is forecasting 10 Bcf/d of growth by 2024, up from recent levels around 5.5 Bcf/d.

“We tend to break conservative, but we’re looking at the global market. The global LNG market, that’s moving around on ship, is about 40 Bcf/d. So can we grow faster than that?” she asked. “We’re not sending it into this giant, infinite market. That for us is probably the limiting factor. So 10 Bcf/d is based on all of those things.”

The sub-$3 natural gas world that Drillinginfo forecasts long-term leans heavily on LNG takeaway to balance itself, according to the analyst. 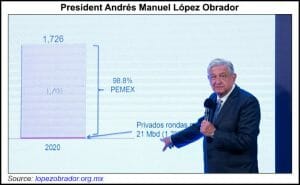 With less than four weeks to go before Mexico’s potentially transformative midterm elections, pollsters are still trying to get a clear picture of what to expect. According to the director of public polling at Mexican daily El Financiero, Alejandro Moreno, Mexico remains in a period of “volatility and uncertainty” and a lot can still change…