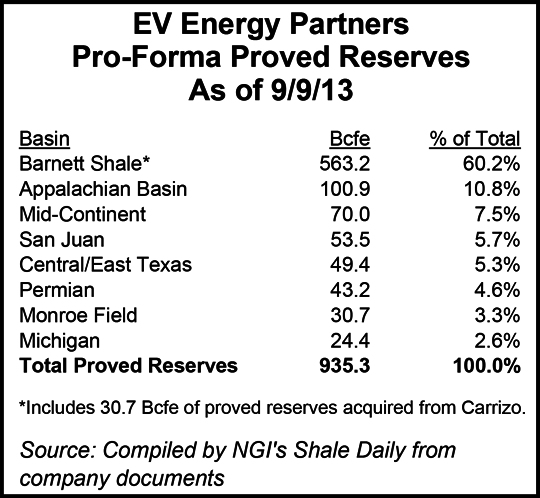 The acquisition is composed of 82 wells producing primarily from the Barnett Shale formation in Tarrant County, TX. The assets include more than 17,000 gross acres (9,500 net acres), which are 100% held by production.

“These ‘bolt-on’ assets are very complementary to our strong operating position within the Barnett Shale,” said EVEP CEO Mark Houser. “Our team has a demonstrated exploitation track record in the Barnett and will leverage their expertise in these new high-quality gas properties. The Barnett reservoir within these new leases has estimated gas in place of 150-200 Bcf per 640-acre section, and the existing wells drilled have estimated ultimate recoveries averaging over 5 Bcf per well. We believe these properties will provide very attractive future development opportunities, even at current gas prices.”

EVEP has agreed to acquire a 31% interest in the assets for $67.6 million ($218 million for all EnerVest-affiliated entities combined). The deal is expected to close by Oct. 31 and is subject to customary closing conditions and purchase price adjustments. EVEP plans to finance the acquisition with proceeds from its previously-announced Utica Shale acreage sale (see Shale Daily, Aug. 13) and borrowings under its existing credit facility.

The properties include estimated proved reserves as of July 1 of 62.3 Bcf and estimated probable reserves of 30.7 Bcf, net to EVEP based on recent Nymex prices; reserves are 100% natural gas and 58.4% proved developed. There are 71 identified low-risk proved and probable drilling locations with an estimated average drilling and completion cost of 85-90 cents/Mcf. Net daily production to EVEP’s interest is 13.1 MMcf/d.

On Wednesday Carrizo said it was selling its remaining Barnett Shale properties as well as other noncore assets in East Texas and the Marcellus Shale (see Shale Daily, Sept. 5).

EVEP said it intends to hedge a portion of the acquired production volumes at or prior to closing.