Volatility continued to rock the Mexican natural gas market this week as North American prices came under the influence of wildly unpredictable Asian and European fundamentals. 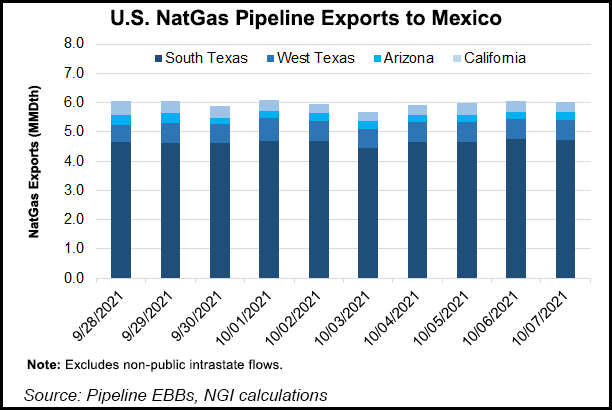 U.S. benchmarks key to Mexico bounced all over the place Monday through Thursday, but they were solidly above $5/MMBtu for another week.

During Winter Storm Uri in February, natural gas in Texas was impeded from reaching the market in Mexico. That sent prices into the stratosphere and shut down power plants. For a brief period, Texas Gov. Greg Abbott even forbade the sale of gas outside state lines.

Given this “level of stress,” the likelihood of having to resort to importing liquefied natural gas (LNG) to secure supply “is high,” Falcón said. “This puts price differentials in the spotlight.”

According to Wood Mackenzie data, natural gas imports from the United States were down 3% this month compared to last month. This trend is driven by lower power burns as temperatures ease. Still, “the high price environment is playing a role here, too,” Falcón said.

NGI’s 10-day average for U.S. imports into Mexico through Thursday was 5.97 Bcf/d. Overall U.S. pipeline exports to Mexico are expected to rise by 18% this winter year/year, the Natural Gas Supply Association said in its annual winter outlook released Thursday.

Underlying the increasingly global nature of the gas market, Mexican prices have lately been influenced almost more by what happens in Russia and China than by the market in Texas.

In an NGI podcast this week with Price Editor Leticia Gonzales and Associate Markets Editor Kevin Dobbs, Gonzales said generally, this is the time of year when prices are at their lowest. Instead, U.S. prices are at the highest level since 2014.

Even so, U.S. prices, and by extension Mexico prices, are “still a big bargain to the prices in Asia and Europe.”

On Wednesday, spot prices in Asia were assessed at a record of nearly $60. British and Dutch futures fell about $3 each day/day to settle near $37, but they each touched intraday highs of roughly $55.

Mexico’s Sistrangas five-day line pack average was 6.933 Bcf/d on Wednesday (Oct. 6), in the sweet spot of the optimal line pack of 6.86-7.29 Bcf needed to guarantee sufficient pressure in the system.

On Wednesday, demand on the Sistrangas was 4.489 Bcf, versus 4.377 Bcf a week earlier. Mexico gas production fed into the Sistrangas fell week/week to 1.292 Bcf from 1.427 Bcf. The processing centers at Nuevo Pemex (358 MMcf), Burgos (300 MMcf) and Cactus (326 MMcf) were all down on the week and were the leading injection points.

On Thursday, the U.S. Energy Information Administration (EIA) reported an injection of 118 Bcf into natural gas storage for the week ended Oct. 1. This was far above market expectations.

The South Central region key to Mexico also saw healthy injections into stocks. It posted a robust 41 Bcf increase in storage, including 21 Bcf in nonsalt facilities and 20 Bcf in salts.