Cheap U.S. natural gas contributed to a decision by European steelmaker Voestalpine AG to site a new plant outside of Corpus Christi, TX. 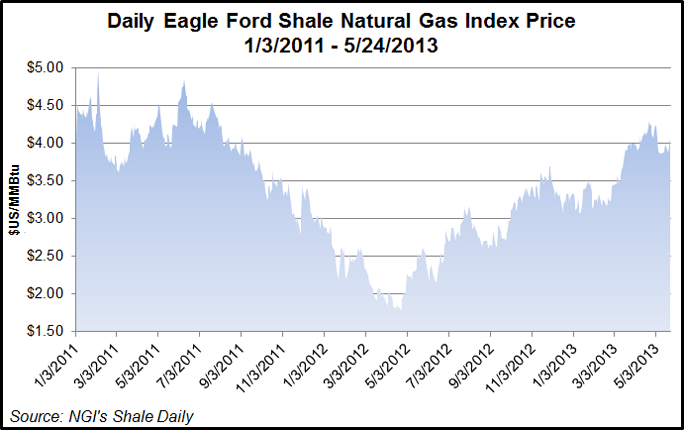 The planned facilities to be constructed on the La Quinta Trade Gateway in San Patricio County are designed for an annual capacity of around two million tons of HBI (hot briquetted iron) and DRI (direct reduced iron). The plant is due to begin operations in early 2016 at the site, where it will have access to the Gulf of Mexico and gas from the Eagle Ford Shale and elsewhere.

“We examined a total of 17 sites in eight countries for this project, the largest foreign investment in the group’s history to date. In the end, Texas was the most convincing in terms of all the key criteria, including logistics, energy supply, a well-educated workforce, and the political environment,” said Voestalpine Chairman Wolfgang Eder. “This will provide the Austrian steel production sites in Linz and Donawitz with access to cost-efficient and environmentally-friendly HBI and DRI pre-materials, ensuring their competitiveness over the long term.”

Instead of coke-based blast furnaces, the plant will use natural gas as the reducing agent. In the United States, the price of natural gas is around a quarter of that in Europe, the Linz, Austria-based company said. “In the USA, we can access energy cost efficiently and operate in a politically stable, predictable environment,” said Eder. “This investment also provides the Voestalpine Group an additional growth option in North America over the long term.

“Locally, the professional and open cooperation between all the parties has been exemplary. This is impressive evidence of the USA’s efforts to rapidly and sustainably re-industrialize their economy. The fact that, as an industrial enterprise with a vision for the future, we were welcomed with open arms also played a role in deciding on this site. It would have been impossible to build a comparable plant in the European Union, not least because of a lack of competitiveness in terms of operating costs.”

The company is working on obtaining an air permit for the plant. Environmental regulations in the United States are similarly stringent to those in Europe, the company said; however, relative to carbon dioxide, “Texas is taking a different route.” A final decision on the project is expected this summer following conclusion of negotiations with local authorities, the company said.