The cost of electricity has surged to record highs across Europe, following a meteoric rise in natural gas prices that could pave the way for painfully high consumer rates across the continent through the winter and well beyond. 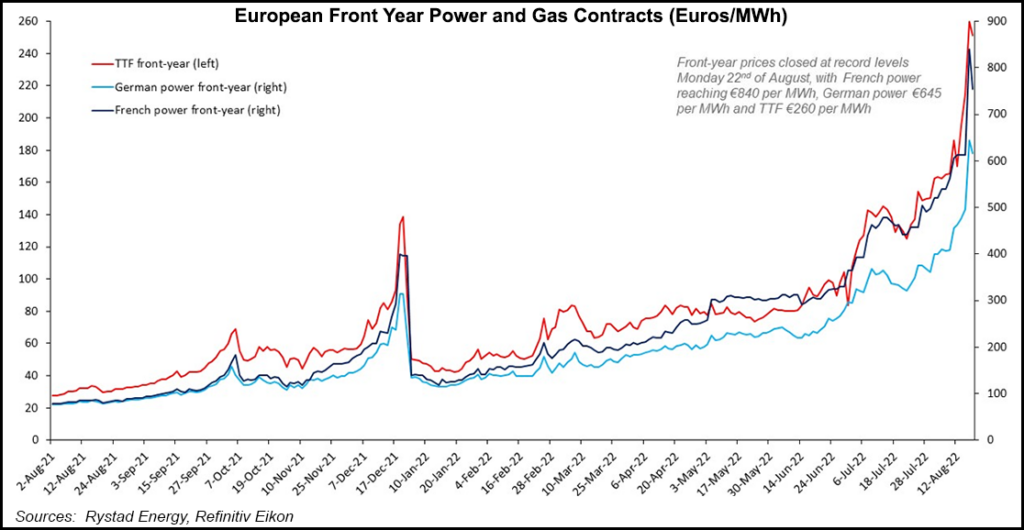 Electricity futures across much of the continent jumped above 600 euros/MWh last week, an exponential gain from the roughly 20-30 euros/MWh average over the last decade. In a note on Wednesday, Rystad Energy analysts wrote that records have been broken on an hourly and daily basis throughout the month.

“Should the current trend continue, then winter power prices will be punishing for European consumers large and small,” said Rystad analyst Fabian Rønningen. German and French power prices hit fresh highs as the week came to an end. French year-ahead power surged past 1000 euros/MWh Friday for the first time ever.

The power crisis has unfolded in tandem with soaring natural gas prices as Russia has curbed exports to the continent. The benchmark Dutch Title Transfer Facility again set records Friday, when contracts through the remainder of the year finished above $100/MMBtu amid ongoing fears there won’t be enough gas to go around this winter.

Rønningen noted that natural gas is the marginal producer of electricity in most European nations, meaning power and gas contracts are usually highly correlated.

The European power crisis has been gaining momentum throughout the summer. French nuclear availability issues, depleted hydro reservoirs due to drought and declining output at aging nuclear and coal plants have exacerbated the situation along with low wind output.

Analysts at Engie EnergyScan said this week that fundamentals are unlikely to change anytime soon given hot forecasts, calm weather conditions further curbing wind and the anxiety gripping the market over whether Russia will further cut deliveries next month. The situation has grown so dire that European energy ministers are again reportedly considering an emergency summit to address the snowballing crisis.

Rystad said August is on track to set new records for Europe’s power market, particularly in Italy, France, Germany, the UK and parts of the Nordics.

For the first time ever, the firm said, a major European market could have a monthly average spot price above 500 euros/MWh, or roughly $498/MWh. Both front-month and front-year prices have also closed well over 600 euros/MWh this week.

UK consultancy Timera Energy Inc. said gains further out the gas curve are “of far greater consequence.” Timera said this week that gas for calendar year 2023 has risen 120% since the start of July. Calendar 2024 has seen similar gains.

“These are seismic shifts in the energy cost base of the European economy,” Timera said. “They point to impending broad-based industrial demand destruction and a substantial increase in the probability of administered gas rationing.”

Power demand destruction is becoming evident as manufacturers and chemical producers across the continent have been announcing cuts in output.

Timera noted, however, that Europe needs gas to keep the lights on since it’s the marginal molecule.

“Acute power market tightness across Europe has been a key factor dragging up forward gas prices across the last six weeks,” the consultancy said. “Europe needs more generation output to keep the lights on and the only remaining option is gas.”

Uniper SE plans to bring its Heyden 4 coal-fired plant back online in Germany next week. The 875 MW facility is expected to operate through next year to help meet Germany’s energy needs this winter.

The nation is one of Europe’s biggest energy consumers. German utility Steag GmbH also plans to bring back the Bexbach (726 MW) and Weiher (655 MW) coal-fired plants in November. Steag also put plans on hold to shutter two other coal-fired facilities in October.