European natural gas prices surged Monday as the supply concerns that have plagued the market this winter are deepening amid ongoing tensions between Russia and Ukraine. 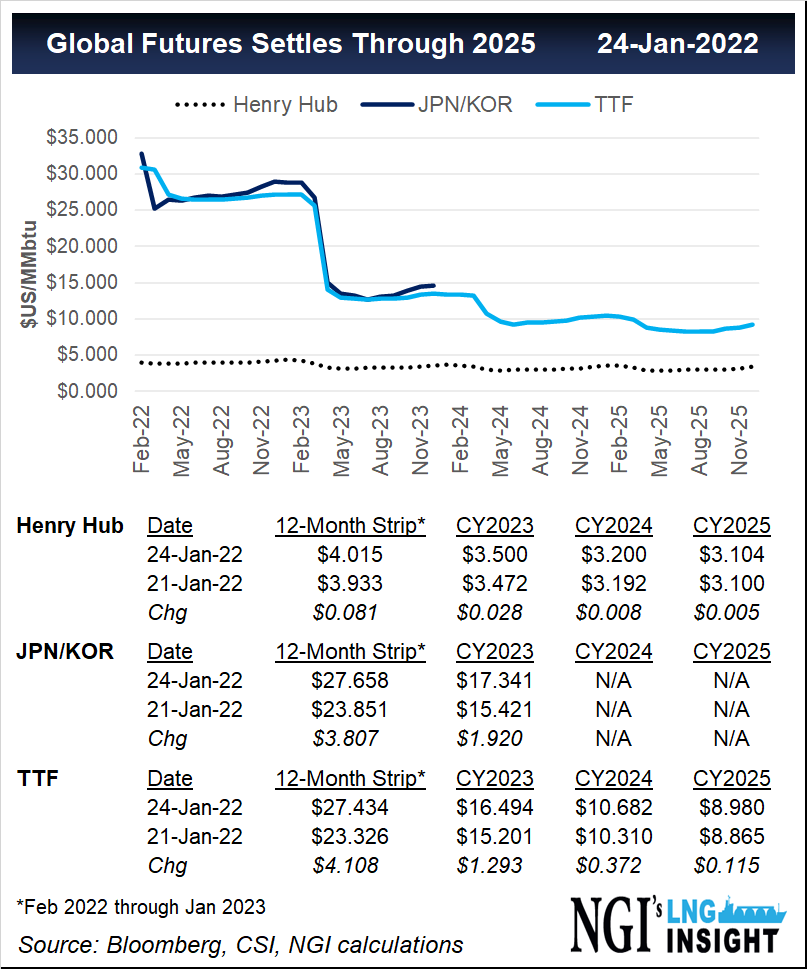 The Title Transfer Facility (TTF) gained across the curve, moving higher along with the Japan-Korea Marker (JKM). Buyers in Asia are slowly returning to the spot market. Additionally, two of China’s state-owned LNG importers reportedly decided against offering dozens of cargoes by closing sales tenders that had weighed down prices in the region last week.

The February and March TTF contracts gained by nearly $5 on Monday, capturing headlines as a standoff between Russia and Ukraine could potentially leave the continent short of gas supplies at a time when storage inventories are at their lowest in over a decade.

“LNG markets are still primarily driven by European prices, as the energy crisis storms on, European Union storage levels are at record lows and price volatility has continued due to significant variance in market fundamentals scenarios,” Felix Booth, head of LNG at Vortexa Ltd., told NGI. “This market uncertainty is centered around Russian gas supplies to central Europe and the associated geopolitical dimension of the growing tension over Ukraine.”

European storage inventories were at 43% of capacity Monday, compared to the five-year average of 59%. Goldman Sachs Commodities Research said in a note Monday that if tensions between Russia and Ukraine escalate, “the initial uncertainty around its impact on gas flows would likely lead the market to once again add a significant risk premium” to European natural gas prices.

“There is in addition the potential risk that any escalation could result in sanctions on Russia’s Nord Stream 2 pipeline, which would potentially end up curtailing flows to Europe for an indefinite period,” said Goldman analysts led by Samantha Dart.

European natural gas prices have fallen over the last month. Warmer weather, an influx of LNG imports and less competition from Asia, where gas stocks have been sufficient this winter, have pushed prices lower.

LNG cargoes were being offered at a discount to TTF last week. Kpler analyst Laura Page told NGI that cargo arrivals are expected to hit a record 11.4 million tons (Mt) this month, up from 8.7 Mt in December and well above the previous record of 9.7 Mt in March 2020.

But given the European storage deficit, it will take more to balance inventories than just LNG alone and the market is likely to remain tight through the summer and beyond, according to Goldman Sachs. Russian flows into Germany via the Yamal-Europe pipeline were still in reverse Monday as they have been since Dec. 21. Russia also decided against booking any extra capacity through Ukraine or into Germany at monthly auctions last week.

European Energy Commissioner Kadri Simson told reporters over the weekend that governments are exploring whether allies could provide additional natural gas if Russia curtails shipments in the event of a broader conflict with Ukraine.

JKM spot prices also inched up Monday, gaining roughly $2 to finish closer to $24/MMBtu. Colder weather and declining inventories were said to be pushing Japanese buyers back into the spot market. Bloomberg reported that China Petroleum and Chemical Corp. and China National Offshore Oil Corp. closed sales tenders last week for dozens of LNG cargoes after receiving low bids. The companies sold only a small portion of the cargoes that they offered for delivery through November.

Rising geopolitical tensions have also helped push oil prices higher. The Omicron variant has had a more moderate impact on demand than expected, pushing benchmark Brent crude prices to their highest level since 2014 last week at over $88/bbl. Both the International Energy Agency and the Organization of the Petroleum Exporting Countries said last week that they expect oil demand to climb for most of this year.

Meanwhile, coal prices in Asia surged last week mainly due to supply disruptions in Indonesia earlier this month that are still having an impact. Back in Europe, day-ahead power prices jumped Monday as well due to weak wind output and climbing gas prices.

Things were steadier in the United States as the week got underway. Henry Hub prices were stable near $4/MMBtu Monday after shedding about 6% last week on mixed weather forecasts.

A historic drought in the country cut hydropower reservoir levels last year and increased the need for gas-fired power. The rainy season has started in Brazil, bringing some of the highest rainfall levels in years and so far cutting LNG requirements this year.