European natural gas prices jumped on Monday after flows reversed on a key pipeline that moves Russian supplies to the continent. 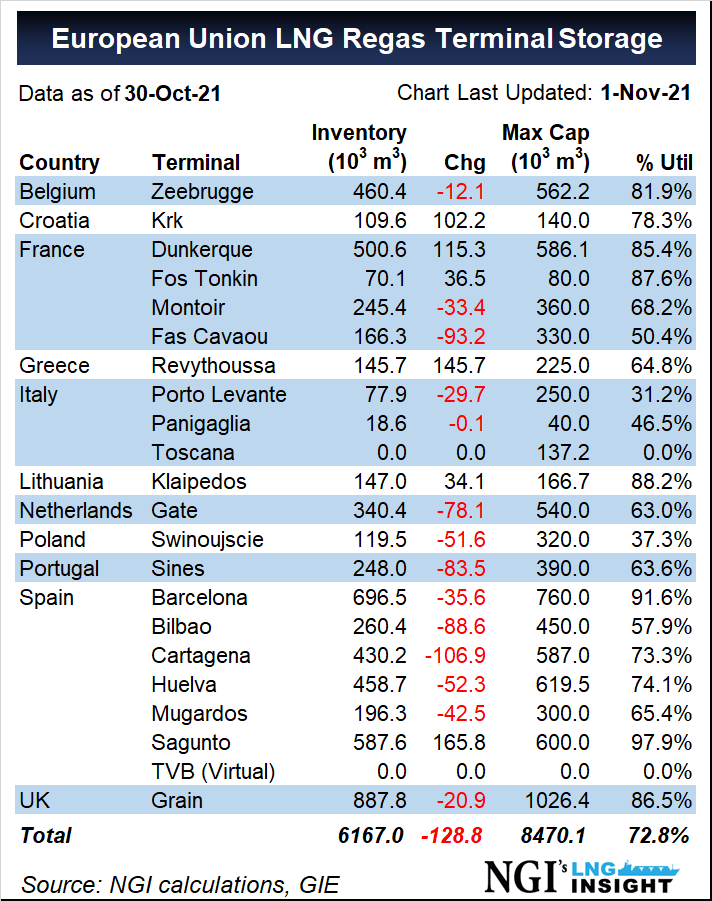 Monday’s price action was the latest to demonstrate how mixed signals from Russia have the European market seesawing. The Dutch Title Transfer Facility and National Balancing Point benchmarks dropped sharply last week, falling from over $30/MMBtu to near $20 after it seemed more Russian supplies were headed for the continent, which is short natural gas heading into the winter.

Prices bounced back Monday and settled above $22 after data from grid operator Gascade showed that flows reversed over the weekend on the Yamal-Europe pipeline, with volumes moving eastward toward Poland instead of Germany. Similar flows were seen Monday.

The reversal isn’t entirely abnormal. Gazprom PJSC said it is meeting contractual obligations and noted that fluctuations in demand for its gas are highly dependent on the needs of buyers. Germany saw warmer weather over the weekend.

But the flows stand in direct contrast to comments made by Russian President Vladimir Putin last week, who ordered Gazprom to fill European storage inventories beginning next week after domestic stocks are filled. European prices dropped off sharply on Thursday after Putin’s remarks.

In Southern Europe, meanwhile, Spain’s imports from Algeria flowing through Morocco on the Maghreb-Europe pipeline have stopped. Algeria ordered flows to stop after a 25-year transit agreement was not renewed amid a diplomatic dispute between the two countries. Volumes are still flowing to Spain from Algeria on the Medgaz line, but the nation is now more dependent on LNG imports.

The decline in European prices has weighed on spot prices in North Asia, which dipped below $30 on Monday. China’s move to increase coal production and limit the rise in prices also pressured gas prices lower in the region.

China’s gas demand this winter is expected to increase and gas supplies are expected to cover coal shortages. The nation’s leading oil majors have all increased natural gas production through the first nine months of the year, according to quarterly earnings. LNG imports in the country have remained resilient, however, with utilization rates at import terminals above 90%, according to Rystad Energy.

In the United States, prices have tumbled on a warmer weather outlook. They hit multi-year highs last week and traded well above $6/MMBtu before weather-related demand destruction cut into their rise. But they remain strong compared to the levels of recent years.

“Henry Hub prices continue to remain above $5/MMBtu, and we anticipate market tightness to continue throughout the winter given limited supply and robust pipeline and LNG exports,” said Rystad analyst Wei Xiong.

Elsewhere in the United States, FERC has requested information from existing LNG export and import terminals, along with others under development about heat exchangers and maintenance on welds and corrosion.  The Federal Energy Regulatory Commission has asked for the information from nearly 24 facilities by Nov. 25.

World leaders were also gathering in Scotland Monday as the The United Nations Climate Change Conference of the Parties, aka COP26, kicked off. The summit is part of a stipulation in the Paris Agreement for participating nations to update their climate plans every five years.

Nations have been busy rolling out their ambitions ahead of the two-week event. Saudia Arabia said it would target net-zero greenhouse gas emissions by 2060. Qatar also unveiled a national climate change plan late last week to cut GHG by 25% by 2030.

Among other announcements on Monday as the summit got underway were a pledge from India to reach net-zero emissions by 2070 and a strategy from the Biden administration aimed at helping the United States reach net-zero by 2050.