Natural gas prices in Europe on Monday slumped to their lowest level since Russia invaded Ukraine in February as weak demand and the steady arrival of liquefied natural gas (LNG) cargoes have combined to weigh down benchmarks. 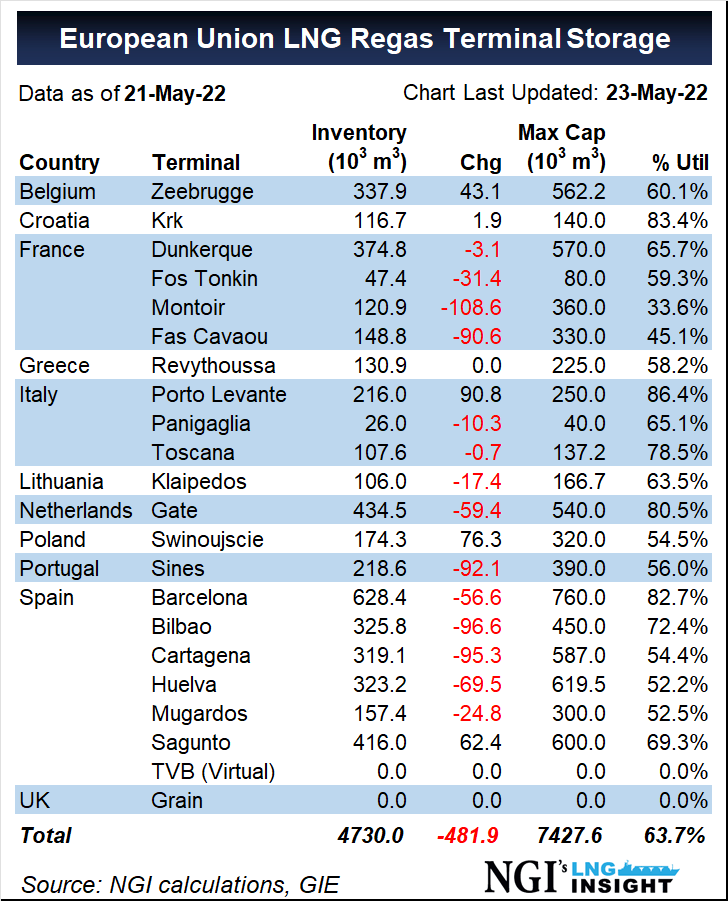 Storage inventories are filling rapidly as the continent races to displace Russian supplies. Inventories were at about 43% of capacity Monday, compared to the five-year average of 46% for this time of year.

“LNG vessels continue to head to Northwest Europe for regasification with gas export pipelines from the region now at capacity, as a result spot prices for LNG in Asia are trading higher than Europe,” said Rystad Energy analyst Lu Ming Pang.

The TTF front-mont closed near $26 Monday, building on losses late last week despite Gazprom PJSC’s decision to cut off natural gas supplies to Finland for failing to comply with a payment process that allows Russia to receive rubles for its gas exports to Europe.

Pipeline flows from Russia and Norway were mostly stable Monday. Slight drops from Ukraine into Slovakia and an unplanned outage at Norway’s Troll Field cut into deliveries. Russian flows on Nord Stream 1 into Germany were steady.

A jump in coal prices, along with the war in Ukraine’s potential impact on Russian gas volumes transiting the country, have limited further declines in European gas prices.

A reported outage at Qatargas 1’s three trains for planned maintenance through the end of the month could limit available short-term supplies, while hotter-than-normal weather expected to kick off the summer in parts of Southern Europe could also keep prices elevated.

For now, Pang said waiting times to unload cargoes in Europe have jumped given congestion at delivery terminals. That has tied up vessels for longer stretches and pushed rates for LNG tankers higher in both the Atlantic and Pacific basins.

Higher storage inventories and Covid-19 lockdowns in Asia have cut into demand there this year, but interest in the spot market has been growing. Trading firm Trident LNG said Friday that sentiment has improved in the region as Japanese and Korean buyers sought spot cargoes.

Lockdowns in Shanghai, which have lasted for nearly two months, are also set to ease beginning June 1.

Strengthening Asian demand cut into LNG deliveries in Europe last week, when 24 of the 30 originally scheduled vessels unloaded, according to Schneider Electric.

Strong international demand has pushed feed gas deliveries to U.S. terminals to an eight-week high of 13.4 Bcf/d, according to EBW Analytics Group. The call on U.S. LNG exports was partially offset by higher production over the weekend, which hit a four-week high of 1.6-1.9 Bcf/d over last week’s lows,  said EBW analyst Eli Rubin.

Cooler weekend weather model trends cut into expectations for early June heat in the U.S. and saw natural gas futures slide in early trading Monday. But the prompt Henry Hub roared back to hit an intraday high of more than $8.80/MMBtu and finished at $8.744.

“In fact, we currently show the next four numbers coming in under the five-year average build, something that is not sustainable without ultimately driving prices higher until we can price out some demand,” the firm said.

Crude prices were also moving higher Monday, at one point climbing above $114/bbl on supply risks and strong demand.

In other news last week, Qatar and Germany signed a joint declaration of intent to work closely on energy. The countries are negotiating a long-term supply agreement for LNG, but Qatar won’t be able to provide any new supplies until the Golden Pass terminal comes online in Texas in 2024. ExxonMobil and Qatar Energy have partnered on the project, which is under construction.

Freeport LNG Development LP also asked federal regulators for another extension to build a fourth liquefaction train at its plant in Texas. The company now wants until August 2028 to complete the 5 million metric tons/year expansion, citing delays caused by the pandemic. The company was previously granted an extension to construct the train by May 2026.

And on Monday, President Biden announced the formation of a new economic bloc with a dozen Indo-Pacific nations including Australia, Japan and South Korea. The alliance is aimed at countering China’s clout in the region.

The economic partnership comes after the Trump administration withdrew from the Trans-Pacific Partnership. The bloc would also focus on decarbonization and energy infrastructure aimed at combating climate change and accelerating the energy transition.