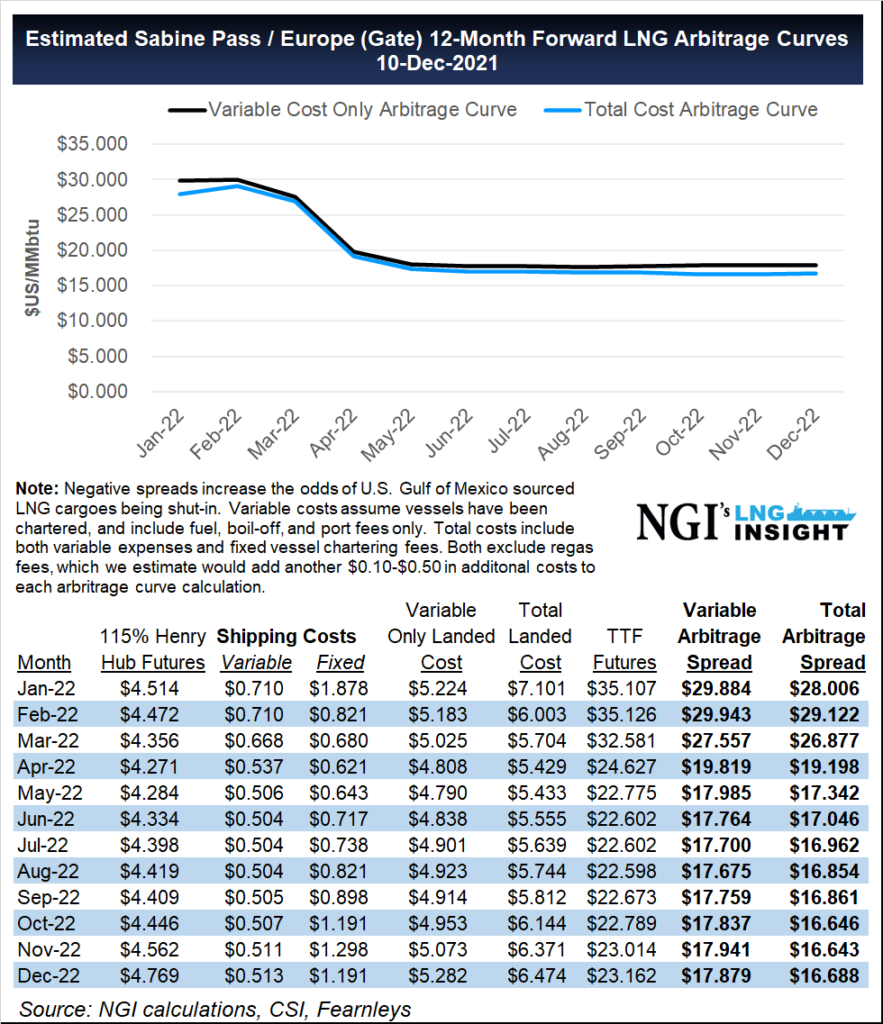 Dutch front-month futures have gained about $10/MMBtu over the last week. The January Title Transfer Facility (TTF) contract finished nearly $7 higher than the prompt Japan-Korea Marker (JKM) on Tuesday. The rally lost steam for most of Wednesday as pipeline imports stabilized after a Norwegian outage ended. But as spot prices in Asia moved higher, the January TTF contract gained more than $1 to set a new record and ultimately finish above $43 for the day.

The spread between the United States and Europe for cargoes leaving the Gulf Coast crept above $37/MMBtu this week, while the arbitrage to Asia sits around $30, according to NGI calculations.

With Henry Hub trading around $4/MMBtu, a large cargo produced in the United States is valued at about $16 million. However, at current TTF prices, its value in Europe stands at roughly $168 million – a staggering arbitrage of $152 million, according to shipowner Flex LNG.

“If you are able to source cargoes in the U.S. on a Henry Hub-linked index, it’s like having an ATM,” Flex CEO Oystein Kalleklev told NGI on Wednesday.

Why Are European Natural Gas Prices So High?

Mounting tensions between Russia and Ukraine have further stoked concerns about prolonged delays in bringing Nord Stream 2 online if Russia is sanctioned for any provocations. Colder weather is also set to arrive next week in Europe.

The situation in Asia stands in “sharp contrast to the relatively cold start of winter in Europe, where a strong start to the withdrawal season is raising fears of complete stocks depletion before the end of winter,” Energy Aspects said in a recent note to clients.

While spot prices in Asia jumped above $40/MMBtu on Wednesday, the market has remained relatively stable, according to Rystad Energy. Analyst Emily McClain said Wednesday that terminals in China and Japan are well stocked given mild weather in the region. Higher spot prices are also keeping some Asian buyers on the sidelines, with fuel oil a likelier choice in the event of any emergency power needs, McClain said.

Still, the situation could change quickly. If LNG plant outages last longer in the Asia-Pacific,  buyers could be forced back onto the spot market to replace term cargoes. Energy Aspects said the impact of the outages already could be evident in Korea Gas Corp.’s move back into the spot market last week, when the company issued a tender seeking January to February 2022 deliveries.

Storage inventories in Europe sit at 62% of capacity, compared with the five-year average of 79%. Goldman analysts noted that at current prices, which also jumped further down the curve through the winter months on Wednesday, more and more LNG is likely to arrive in Europe. This could more than offset any draw down in storage because of colder weather and help keep a lid on prices.