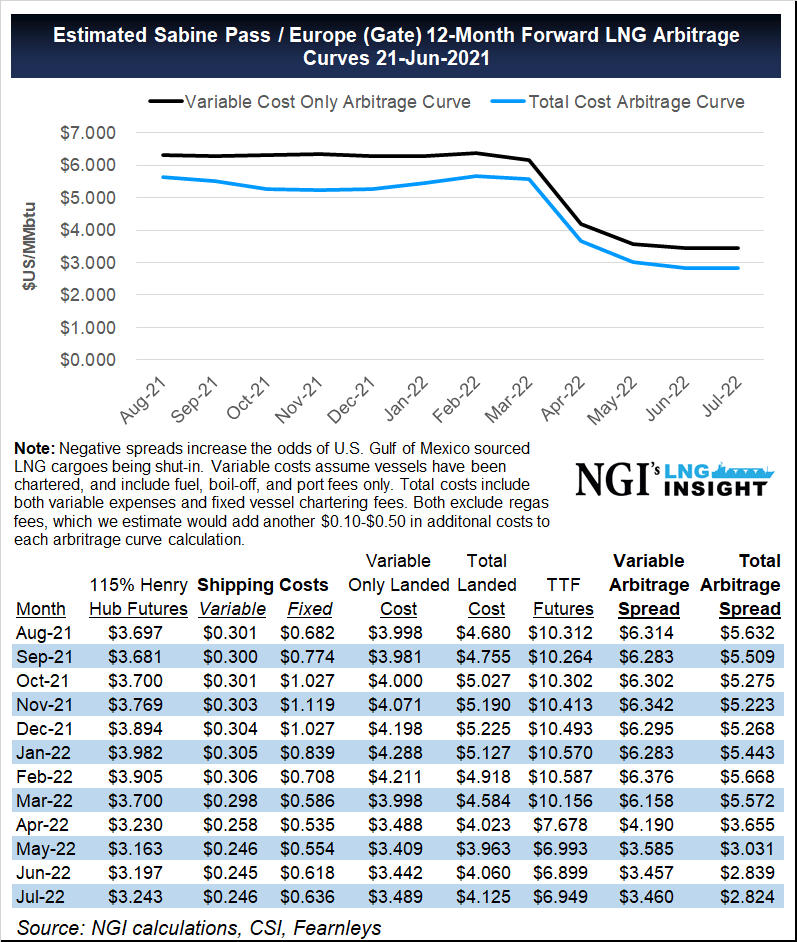 The prompt Title Transfer Facility (TTF) contract closed Friday at $10.237/MMBtu and finished higher on Monday at a level not seen since 2008.

European gas prices have been strong since the beginning of the year. Storage inventories were at 44% of capacity on Monday, about 23% below the five-year average and at their lowest level since 2018.

Strong natural gas demand in Asia, where prices are at a premium, has continued to pull liquefied natural gas (LNG) cargoes away from Europe. Norwegian pipeline imports have been cut due to seasonal maintenance, while work at LNG import terminals continues. Maintenance at the Dunkirk receiving terminal in France has largely concluded, but work at the Gate terminal in the Netherlands started last week and is expected to last for about a month.

“The looming annual maintenance on the Nordstream and Yamal pipelines, scheduled for next month, could continue to support prices for July 2021 delivery in a context of relatively limited supply flexibility,” analysts at Engie EnergyScan said in a Monday note.

LNG supplies from the United States are also down this month on maintenance. Feed gas deliveries in June have been flowing at 9-10 Bcf/d, down from highs of over 11 Bcf/d in May, according to NGI’s U.S. LNG Export Flow Tracker. NGI data also shows that spreads between the United States and Europe are at their highest point ever at more than $6/MMBtu. The last time TTF was trading at its current levels, U.S. exports from Lower 48 states didn’t exist.

Asian prices also gained Monday, with the Japan-Korea Marker moving back toward $12 on the rise in European benchmarks. Bloomberg reported that Petronet LNG Ltd. and Indian Oil Corp. have awarded tenders for delivery in the coming months, signaling a return to the spot market as a surge in Covid-19 cases has slowed.

Demand from China is also elevated, with more end users there buying on the spot market despite higher prices. China’s National Development and Reform Commission has increased subsidies for both coal and natural gas in an effort to attract additional supplies amid power shortages in Guangdong province. Hot weather and low hydropower reservoirs have strained the grid in the industrial center.

Meanwhile, a pipeline explosion earlier this month in Hubei province that killed 25 people has the natural gas industry facing scrutiny. The government has reportedly stepped up safety measures across various industries after the blast, which shut mines in Hubei, lifting coal prices.

JKM prices have also been strong this year, partly due to a ramp in Chinese buying. Consultancy Wood Mackenzie said last week that it expects 11 million tons (Mt) of LNG demand growth from China this year. At that rate, the country would account for more than half of the 18 Mt of global LNG growth this year, according to Wood Mackenzie’s forecasts. The firm said China would likely overtake Japan as the world’s largest LNG market.

Meanwhile, in the United States, Henry Hub futures fell in Monday trading on uncertain weather outlooks and climbing production levels. The contract also closed lower Friday after a bumpy week of trading. Tropical Storm Claudette moved east of LNG terminals in Louisiana and didn’t pose a threat to operations. But the storm could cut natural gas demand in the country.

In the crude market, Brent continued to show strength, gaining $1.39 to finish at $74.90/bbl Monday. Citigroup Inc. said last week that Brent could soon surge above $80 on higher demand as consumption recovers amid a global rebound from the pandemic. Brent hasn’t hit that level since October 2018. BofA Global Research went further on Monday, saying the global benchmark could hit $100 by 2022 on tighter supply and demand balances.

In other news last week, Nigeria LNG Ltd. broke ground on a seventh train at its terminal on Bonny Island in the Niger Delta. Train 7 would boost the facility’s output by 35% to 30 Mt annually.

In the Pacific Basin, Chevron Corp. said it expects to restart Train 3 at its Gorgon LNG export terminal in Australia in the coming weeks. All three trains at the facility have periodically been offline since last year, when welding issues were discovered.