European natural gas prices again set records Monday as Russian pipeline imports were poised to fall further next month, exacerbating fears that the continent would be short of supplies this winter as storage inventories remain low.

Gazprom PJSC booked a fraction of the 15 million cubic meters (MMcm) of firm transportation capacity available through Ukraine for September. The company took just 650,000 cubic meters of the capacity to move natural gas to Europe, according to auction data released Monday.

“European gas fundamentals remain tight, with the persistent weakness of Russian supply as the main source of concern,” Engie EnergyScan analysts said in a note Monday.

Engie said Russian flows slipped to 267 MMcm Friday, down from 268 MMcm on Thursday. They’ve continued to fall, driven by a 20% decline since Friday on the Yamal Pipeline where it enters Germany at the Mallnow compressor station. It’s unclear why volumes have dipped on the system.

Strong demand in Asia has continued, where prices have been at a premium to those in Europe and pulled liquefied natural gas (LNG) cargoes away from the continent. But the Title Transfer Facility (TTF), Japan-Korea Marker (JKM) and National Balancing Point in the UK are all now well above $15/MMBtu for September.

The spread between TTF in northwest Europe and JKM has practically disappeared. That could eventually help attract more LNG to Europe if the trend holds up and ease the supply crunch.

Rising European benchmarks helped support spot LNG prices in Asia on Monday, which were assessed near $17/MMBtu. Despite new outbreaks of Covid-19 in Japan and China, Asian buying remains strong ahead of the winter heating season.

But some buyers throughout the region have been sidelined as spot prices have continued moving higher. Industrial gas demand in South China has reportedly declined due to high spot prices there. Some Indian buyers are also deferring purchases, Petronet LNG Ltd. CEO Akshay Kumar Singh said during a media call over the weekend.

Congestion in the Panama Canal, a vital passage to move goods to Asia between the Atlantic and Pacific oceans, is also impacting LNG transit times. Shipbroker Braemar ACM said delays are now about 14 days for those without reservation slots.

Meanwhile, in the United States, Henry Hub futures bounced back Monday after dipping below $4 late last week ahead of cooler weather. Stronger LNG feed gas demand and lower production helped push up the prompt month by 8 cents to finish at $3.946.

Maintenance and outages curbed feed gas demand at U.S. export terminals most of last week, when deliveries dipped closer to 9 Bcf/d before bouncing back to near 11 Bcf on Friday.

As it has in recent weeks, Brent crude was the outlier Monday. The October contract shed more than $1 to finish at $69.51/bbl on concerns that demand could diminish as the Covid-19 Delta variant spreads across the world.

In supply news, Bloomberg reported last week that Sakhalin II LNG in Russia has delayed a restart after issues arose during regularly scheduled maintenance that started in July. It’s unclear when Sakhalin would start loading cargoes from the facility located on Sakhalin Island north of Japan.

Elsewhere, Inpex Corp. of Japan said last week that a final investment decision on its Abadi LNG project in Indonesia would be delayed due to Covid-19. The pandemic has impacted survey work. Management said climate change might also force it to adjust plans for the facility. Front-end engineering and design work has been suspended since last year due to the pandemic, Inpex said.

Inpex owns 65% of the project and Royal Dutch Shell plc holds the remaining 35%. Abadi would produce 9.5 million tons of LNG/year. Woodside Petroleum Ltd. also confirmed Monday that it is in talks to acquire BHP Group Ltd.’s oil and gas business. BHP holds oil and gas assets in Algeria, Australia, the Gulf of Mexico, and Trinidad and Tobago. BHP, the world’s largest miner, also said Monday that it has started a strategic review of the petroleum business “to reassess its position and long-term strategic fit” in the company’s portfolio. 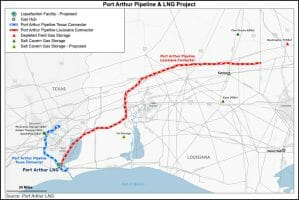