European natural gas prices fell for a seventh consecutive day on Monday as an armada of liquefied natural gas (LNG) vessels makes its way toward the continent and pipeline imports remain stable despite fighting in Ukraine. 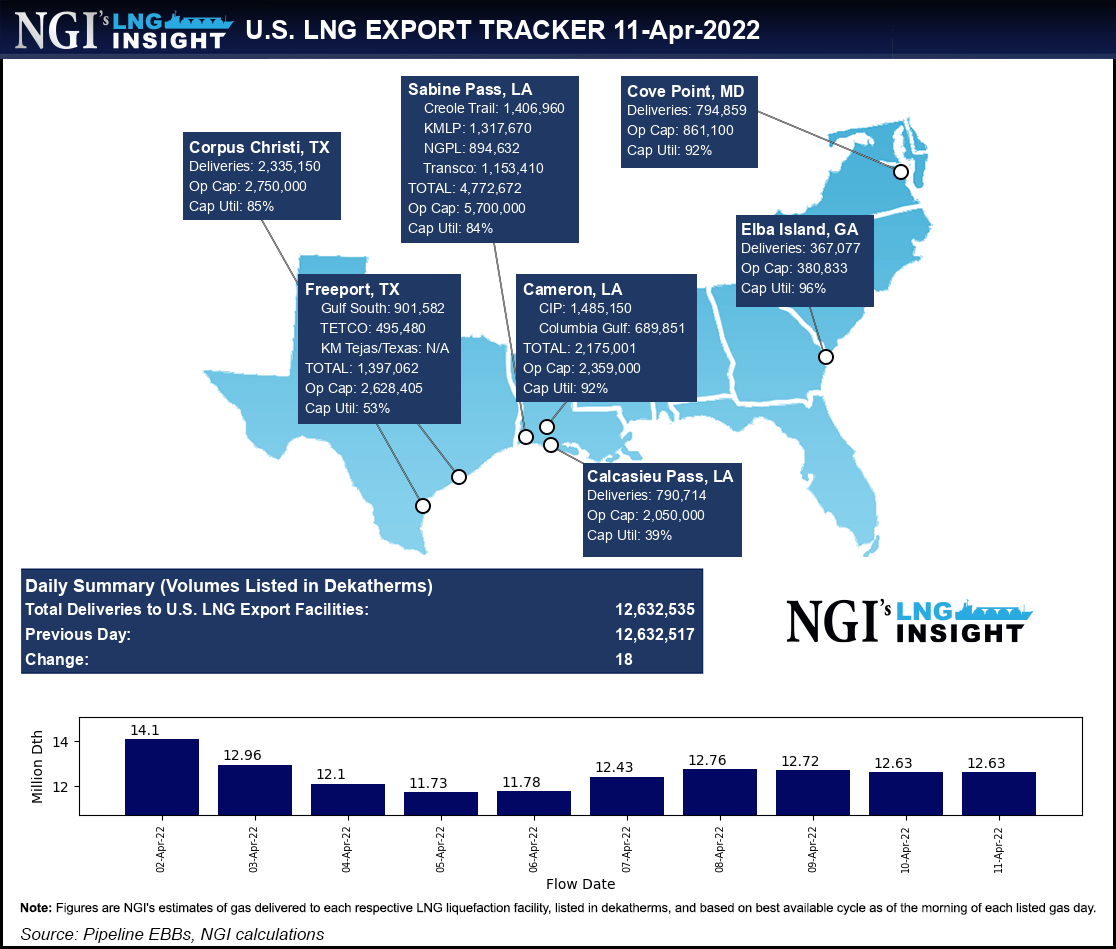 The May Title Transfer Facility (TTF) contract slipped by more than $1 to finish near $32/MMBtu Monday. The market has shrugged off Russia’s demand that European natural gas deliveries be paid for in rubles when bills come due later in the month. Natural gas also continues to dodge Western sanctions after it was excluded from a fifth round of punitive measures last week, when Europe banned Russian coal imports.

Russian gas shipments to Europe dipped over the weekend, but had bounced back Monday. Warmer weather is also forecast for northern Spain, France, Germany and the British Isles over the next five-day period, according to Maxar’s weather desk. Temperatures are also expected to be higher in the UK, France and Spain over the next 10-day period.

Europe remains the premium market for LNG cargoes, with prices there expected to be higher through the remainder of the year as the continent looks to displace Russian volumes and replenish depleted storage inventories.

European LNG imports jumped by 43% sequentially in the first quarter, when prices skyrocketed ahead of Russia’s invasion of Ukraine, according to Tudor, Pickering, Holt & Co. Asian volumes fell 5% sequentially over the same time after buyers stocked up ahead of winter.

But buying in Asia is firming as the spring restocking season begins and competition for the super-chilled fuel increases. Japan is aiming to curb some of its Russian energy imports and early spot buying for winter cargoes has reportedly increased in recent days.

“JKM Asian LNG prices will likely receive some support going forward after Japan said last week that it plans to cut coal imports from Russia, which is expected to increase the demand for LNG cargoes,” said Schneider Electric analyst Nate Nuttapon Komsai. “However, the increase in JKM prices will be weighted down as China is cutting overseas purchases of LNG and instead maximizing cheaper domestic supply.”

Reuters reported Monday that Japan’s government has asked utilities to strengthen LNG reserves and sell any spare gas to other buyers in the country. The mandate comes as Europe is looking for additional LNG cargoes this year to help replace Russian pipeline imports.

Energy demand in Asia has been clouded by Covid-19 lockdowns in China. Brent crude dipped below $100/bbl Monday as “the threat to demand is increasingly in focus” amid rising case counts, Schneider analysts said.

In the United States, meanwhile, supply concerns heading into injection season and strong overseas demand found Henry Hub trading at its highest levels since 2008 on Monday. The May contract was up nearly 30 cents at around $6.60/MMBtu Monday afternoon.

Weather models turned cooler over the weekend, but natural gas production estimates are near year-to-date highs of 94.5 Bcf/d. LNG exports are also off the peaks of last month amid ongoing maintenance, creating uncertainty over how high Henry Hub can go in the near term.

“The big question is, with production a little higher,” and LNG export volumes down because of ongoing maintenance, “will this be enough to turn the tide in sentiment any, and allow prices to stage a meaningful pullback?” said Bespoke Weather Services in a Monday note to clients. “That is a tough guess.”

Feed gas nominations to U.S. export terminals were at 12.63 Bcf on Monday, below highs of more than 14 Bcf/d last month.

Freeport LNG said in a filing last week with the Texas Commission on Environmental Quality that it would conduct maintenance though April 21. About half of the available feed gas capacity serving the terminal, or 1.4 Bcf/d, was being utilized Monday, according to NGI’s U.S. LNG Export Tracker. Fog has also limited some vessel traffic along the Gulf Coast in recent days.

In other news, Dow Inc. said Monday it would take a minority stake in Hanseatic Energy Hub GmbH in Northern Germany. The LNG import terminal is part of Germany’s plan to fast-track natural gas infrastructure to help cut reliance on Russian energy imports.

German utility EnBW Energie Baden-Württemberg AG said earlier this month that it had signed a memorandum of understanding to possibly buy 3 Bcm of LNG annually from the hub.