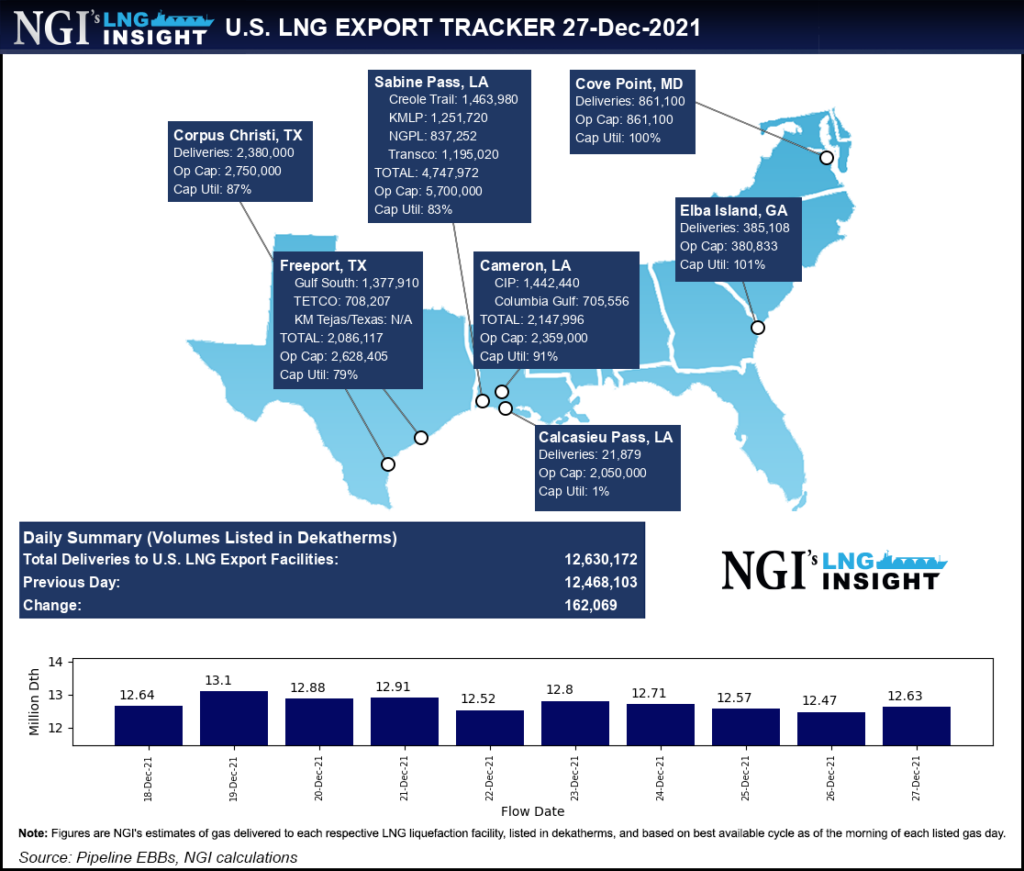 European natural gas prices had been at a rare premium since Dec. 13, incentivizing traders to divert cargoes toward the continent mid-voyage.  But the Japan-Korea Marker February contract finished above $40/MMBtu on Monday, while the prompt Title Transfer Facility (TTF) contract in Northwest Europe dipped below $36 and inverted the spread.

“The ease is linked to warmer weather, a healthy LNG outlook and below-average consumption due to the Christmas holiday season,” said Schneider Electric analyst Aidana Childebayeva of the slide in European prices.

Temperatures across Western Europe are expected to run “well above normal” over the next 1-5 day period as a ridge of high pressure builds across the region, Maxar’s Weather Desk said Monday. The next 6-10 day period is also expected to warm across the UK, Spain, France, Germany, Poland, Italy and southeast Europe as “upper ridging remains parked over the region.”

The February TTF contract hit nearly $60 Dec. 21 as temperatures were plunging, pipeline imports from Russia dropped and nuclear plant outages in France amplified concerns over natural gas supplies. Prices have declined since then. Childebayeva added that some profit taking is also at play as contracts are expiring with the year coming to an end.

Dozens of LNG cargoes were redirected toward Europe in recent weeks as prices soared there. Bloomberg reported that at least 15 U.S. cargoes were headed toward the continent late last week, while another 11 had not yet declared destinations.

In Japan, among the world’s biggest LNG buyers, there were 2.42 million tons of the super-chilled fuel in storage for power utilities, according to the Ministry of Economy, Trade and Industry. That’s roughly 42% above the four-year average.

However, fundamentals remain unchanged and prices could soon move higher in both Asia and Europe. Ramesh said logistical constraints could reemerge in the Panama Canal if temperatures drop in Asia next month. Bottlenecks have eased there as more vessels in the Atlantic Basin have headed for Europe.

Both train 3 at Gorgon LNG and the Prelude floating LNG (FLNG) terminal in Australia are still offline, while inclement weather could hamper output at the Bintulu LNG terminal in Malaysia.

Australian regulators ordered Prelude to remain offline until operations can be fully restored following a fire in an electrical panel earlier this month that has created difficulties in completely restoring power.

Russian pipeline imports in Europe are also being watched closely. Russia has not nominated any natural gas for daily delivery on the Yamal-Europe pipeline since last Tuesday as colder temperatures have elevated demand in the country. Gazprom PJSC also doesn’t plan to make spot gas available on its electronic sales platform this week.

In the United States, strong demand for LNG exports has kept feed gas deliveries to terminals in Maryland and along the Gulf Coast stable at or above 13 Bcf/d. Commissioning at Sabine Pass train 6 and the Calcasieu Pass plant in Louisiana have also pushed feed gas deliveries higher. Rystad said deliveries to Venture Global LNG Inc.’s Calcasieu Pass terminal rose to 25 MMcf/d this month, compared to 17 MMcf/d in November.

Henry Hub finally gained on Monday after hitting a five-month low last week on a mild weather outlook. The January contract finished above $4. Recent forecasts indicate a chillier start to the year across the United States, with colder temperatures set to arrive next month.

In other news last week, New Fortress Energy Inc. (NFE) said it has signed a memorandum of understanding (MOU) with Mauritania to provide LNG for local gas and power markets. Under the MOU, NFE would deploy its Fast LNG technology, which is being developed to utilize jackup oil rigs fitted with small-scale modular liquefaction trains. The technology can be deployed quicker than conventional FLNG vessels, according to NFE.

NFE said it would produce LNG from existing gas reserves offshore Mauritania for use in two gas-fired power plants onshore and international export.