European natural gas prices surged again on Monday as Russia ratcheted up tensions by cutting off supply to another customer and the Kremlin sowed further doubts about equipment needed to boost flows on Nord Stream 1 (NS1). 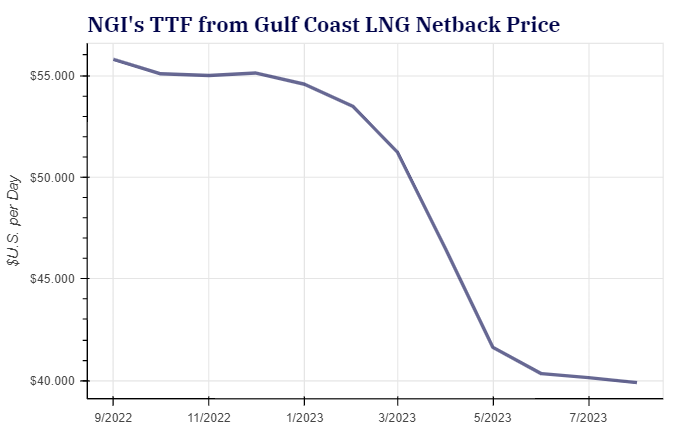 Gazprom PJSC said Saturday that it has stopped delivering natural gas to Latvia “due to violation of the conditions for gas withdrawal.” The company provided no further details. It has already halted supplies to Bulgaria, Finland, Poland and other customers in Denmark, Germany and the Netherlands for failure to pay for gas with rubles.

Latvia said the move would have little impact on its supplies. The country already passed a legislative amendment to ban Russian imports. Gazprom announced the shut off days after Latvia said it was paying for the fuel in Euros.

Flows on NS1, one of the largest pipelines serving Europe, remained at about 20% of capacity on Monday. Just one of eight turbines on a compressor station feeding the 745-mile, 6 Bcf/d line is operating. A Kremlin spokesperson said Monday that sanctions are to blame for missing equipment that Gazprom claims is needed to repair the engines.

European Union members have voluntarily agreed to cut gas consumption by 15% until next spring under a plan put forward by the bloc’s leader that could become mandatory if supplies are cut further.

The economic impacts of the gas crisis are deepening as LNG imports have reached maximum capacity and there’s only so much gas to go around for generating power and operating manufacturing facilities.

“The gas burden in Europe is obviously very serious, and it comes as no surprise that governments are already discussing ways to curtail consumption to minimize damage to economies,” said Societe Generale analysts in a note to clients on Monday. “Unfortunately, we are still months away from the critical gas consumption period, and the oil burden could spike considerably higher.”

As commodity prices have surged, so too has power, with average weekly spot prices hitting a record high last month in Italy, France and Germany, according to Rystad Energy.

BASF SE, among the world’s largest chemical companies, said last week it would cut the production of ammonia for fertilizer to help curb gas demand on the continent.

The city of Munich also restarted an oil-fired power plant in order to cut its gas consumption.

Europe’s energy crisis has been aided somewhat by tepid demand in Asia. Buying in the region has again cooled after liquefied natural gas spot prices surpassed $50/MMBtu last week. Some buyers jumped into the market for additional cargoes over fears that Russian gas cuts would intensify competition with Europe.

Others have been sidelined by high spot prices. Demand has also fallen off in China, where Covid-19 outbreaks have weakened the economy. Newly released China manufacturing data showed output retrenched last month.

Supplies remain tight in Asia as well. Bloomberg reported last week that Russia’s Sakhalin-2 LNG has asked buyers to pay for cargoes in rubles. Russia moved last month to take ownership of the facility from foreign entities it had a partnership with. The terminal provides about 9% of Japan’s LNG imports.

Meanwhile, in Australia labor unions have extended industrial action on Shell plc’s Prelude floating LNG terminal to Aug. 11 over a wage dispute. The impasse has halted cargo loading at the facility since last month.

Fundamentals remain strong for the U.S. market as storage inventories remain low, production is flat and weather is expected to be on the hotter side this month.

LNG exports also remain strong on solid international demand, despite an outage at the Freeport terminal in Texas, where a June explosion knocked the facility offline.

Despite the incident, federal regulators approved an increase in Freeport’s output. The facility filed for authorization to produce 870 Bcf annually, up on operating efficiencies from its previous output of 782 Bcf.