A seven-day rally in European natural gas prices ended Monday as the Dutch Title Transfer Facility contract declined across the curve through the end of the year. 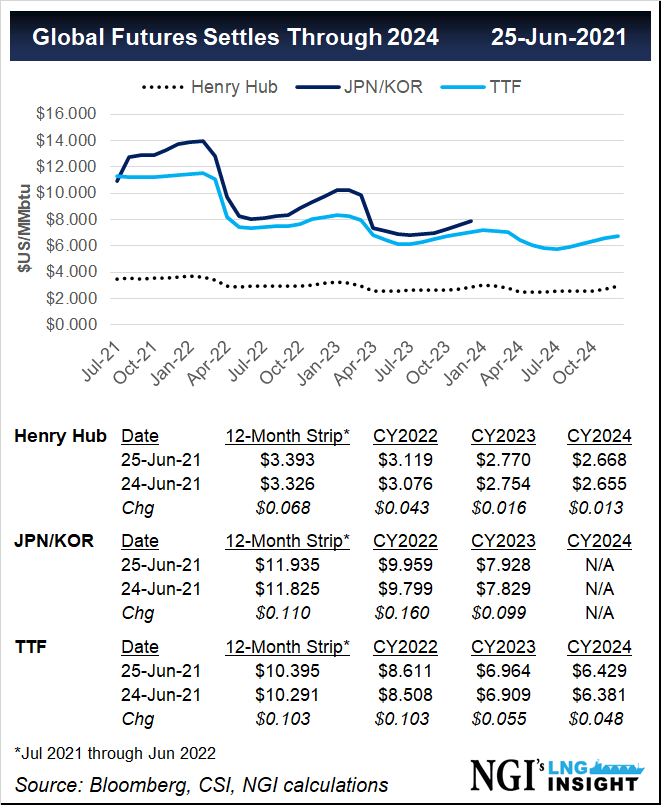 Still, prices remain strong, with the contract holding above $11/MMBtu. The market will turn its attention to a Tuesday auction for Russia to take additional pipeline transportation capacity at the Ukranian border at Sudzha. If Russia takes capacity, which it hasn’t in recent months, it could provide much needed supplies for Europe. The continent’s storage inventories remain low for this time of year.

Overall, traders said it was a quiet day on the market, particularly as spreads with Asia didn’t move all that much. Hot weather and stockpiling ahead of winter are driving liquefied natural gas (LNG) demand in the Far East, where Japan-Korea Marker (JKM) futures charged upward last week and where spot prices were assessed at about $13/MMBtu on Monday.

Buyers in Asia have had to pay more for cargoes as they compete with gas-starved Europe. Norwegian pipeline imports ramped back up on Monday, however, and provided some relief for the continent as did the end of maintenance work at French import terminals, said head of Engie EnergyScan Julien Hoarau.

“We also see a recovery in Russian gas flows through Nordstream 1 after a slight unexpected drop last week, which may explain the slight downward correction” in Monday’s prices, Hoarau told NGI.

European storage inventories were at 46.2% of capacity on Monday. Meanwhile, LNG sendout from import terminals in Europe averaged just 6.3 Bcf/d last week, compared to the June average of 7.6 Bcf/d, according to Tudor, Pickering, Holt & Co.

“Given that European underground stock levels remain below the five-year average leading to high injection demand, and that pipeline supplies from Norway and LNG imports have dropped, I think the market will remain tight,” Rystad Energy’s Carlos Torres Diaz, head of gas and power markets, told NGI. “I therefore see limited downside risk for prices during July.”

A formal meeting among the Organization of the Petroleum Exporting Countries and its allies on Thursday could also impact the global gas market. The cartel is expected to offer guidance about its production plans in the months ahead, which could impact Asian LNG prices, Hoarau added. Much of Asia’s gas buying is linked to oil prices.

In the United States, Henry Hub futures moved higher Monday, with the July contract gaining 12 cents to finish at $3.617 ahead of expiration. Scorching heat is blanketing much of the country and LNG exports ramped back up. NGI’s U.S. LNG Export Tracker showed feed gas deliveries began climbing late last week from maintenance-induced lows and averaged more than 11 Bcf/d through the weekend. Work at Cameron, Freeport and Sabine Pass LNG has limited U.S. exports this month.

In other news last week, state-owned Qatar Petroleum (QP) said ExxonMobil, Royal Dutch Shell plc and TotalEnergies SE are among the bidders for equity investments in the massive North Field East expansion. The project would boost Qatar’s LNG capacity to 110 million metric tons/year (mmty) from 77 mmty. It is planned to start production in 2025. QP CEO Saad Sherida Al-Kaabi said at the Qatar Economic Forum the company has received offers for “double the equity available” in the project.

Reuters also reported that China National Petroleum Corp. expects the nation to reduce its coal use to 44% of energy consumption by 2030 and 8% by 2060 as it targets the use of more natural gas. China is the world’s second largest LNG buyer behind Japan, but it’s poised to take the throne if it continues to import at current rates. The country’s coal imports have also jumped this year amid an economic boom following the Covid-19 outbreak and power shortages in parts of the country.