A coterie of European natural gas infrastructure companies this week expanded its vision for an extensive network of hydrogen pipelines to meet the continent’s future energy needs. 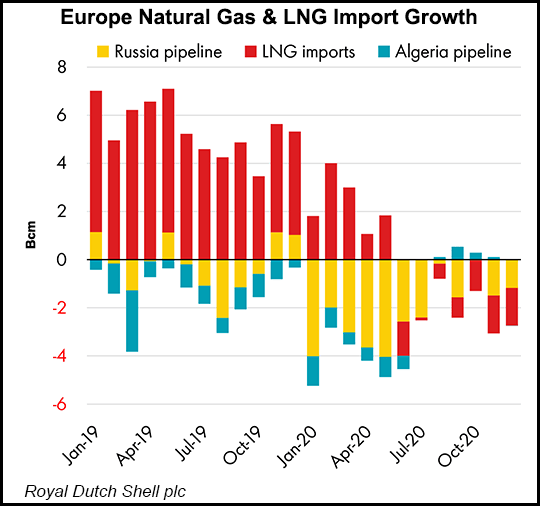 EHB was formed to better plan dedicated hydrogen transport infrastructure across the continent. The companies, which include major European midstreamers such as Enagás SA, Fluxys, National Grid plc and Snam SpA, said infrastructure maps they released for 2030, 2035 and 2040 are based on an analysis of how the grid could evolve to meet decarbonization targets.

Roughly 69% of the proposed hydrogen network consists of repurposing existing natural gas infrastructure, while the remaining 31% would require the construction of new pipelines to tap new offtakers in European countries with smaller natural gas grids.

The buildout would cost up to 81 billion Euros, or nearly $100 billion. The report expands upon another published in July calling for a smaller 14,000-mile hydrogen transportation network.

More regulations and government subsidies to galvanize a shift away from fossil fuels, coupled with mounting pressure from investors to slash emissions and pledges from private companies to achieve net-zero emissions, is providing unprecedented motivation to further explore hydrogen’s potential as an energy source. Rapidly advancing technology may also make hydrogen more feasible in the coming years.

Although hydrogen remains in its infancy, the fuel poses longer-term financial risks for LNG and pipeline gas exporters in places like Europe, where a push is underway to take the lead in establishing a hydrogen economy.

Uniper said it would study the feasibility of replacing the power plant with hydrogen infrastructure, such as an ammonia cracker for producing green hydrogen. The infrastructure, according to the utility, could be tapped into a national hydrogen network to feed future energy demand across the country.

Two types of hydrogen are being targeted to aid in the energy transition. Blue hydrogen is extracted from fossil fuels, and emissions are removed using carbon capture technology. Green hydrogen is made by using renewable energy to split water through electrolysis that ultimately produces an emissions-free product.

Hydrogen is a zero-carbon fuel. In a sign of its potential, the European Commission (EC) has published a roadmap for the European Union (EU) to install at least 6 GW of renewable energy hydrogen electrolyser capacity by 2024 and 40 GW by 2030. The continent is a major consumer of LNG and a balancing arm for the global gas market given its abundant storage capacity.

Like LNG, hydrogen can be chilled and liquefied for transport on ships. It can also be blended with natural gas in the pipeline stream to reduce carbon emissions.