Feed gas deliveries to U.S. liquefied natural gas (LNG) export terminals have been near capacity, flowing at almost 12 Bcf each day over the last week. 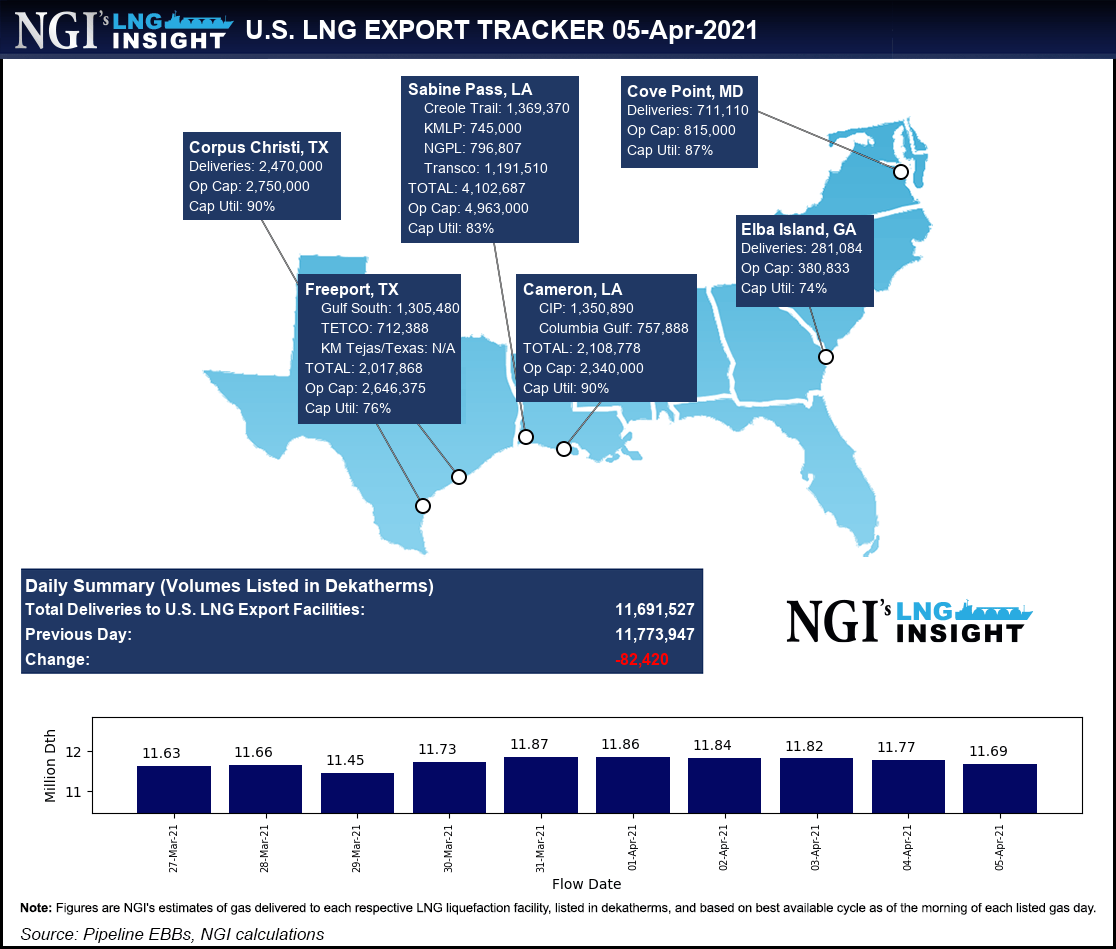 Underground natural gas storage in Europe was at just 31% of capacity on Saturday after a cold winter left stocks short. The lower inventories are helping to drive demand for imports from the United States and other nations such as Russia and Qatar.

Twenty-four LNG tankers with a combined carrying capacity of 87 Bcf left the United States between March 25 and March 31, according to the Energy Information Administration. That’s up from 19 during the previous week.

Spot LNG prices in North Asia also remained healthy Monday at over $7/MMBtu as spring restocking continues across the region as well.

Meanwhile, Brent crude, to which many LNG supply contracts are linked, fell Monday. Brent for June delivery shed $2.71 to finish at $62.15/bbl. The global benchmark gave up gains from late last week after the Organization of the Petroleum Exporting Countries and its allies, aka OPEC-plus, agreed on Thursday to ramp up crude production in anticipation of increased demand.

Saudi Arabia-led OPEC and an allied group of leading producers headed by Russia agreed to boost output by 350,000 b/d in May and June, and then increase to as much as 450,000 b/d in July. Saudi Arabia also would begin to unwind cuts it made earlier this year.

Elsewhere, authorities said Saturday that the large backlog of ships at the Suez Canal has been cleared after a massive container ship was dislodged March 29 after being stuck for nearly a week. Shipping services company Leth Agencies said 572 vessels have transited the canal in the days since the Ever Given was removed. About 24 LNG tankers have moved northbound and southbound through the waterway since last week.

In other news, Qatar Petroleum (QP) said it would not renew the Qatargas Liquefied Natural Gas Co. Ltd. (QG1) joint venture when it expires Dec. 31. QP said it would become the sole owner of the facilities, which produce 10 million tons of LNG annually. Established in 1984, the pioneering QG1 partnership with Total SE, ExxonMobil, Marubeni Corp. and Mitsui & Co. Inc. helped give rise to Qatari dominance in the global gas export market.

In Asia, Eni SpA last week signed a memorandum of understanding with China power generator Zhejiang Energy Group Co. Ltd.  establishing a framework to partner on initiatives across the natural gas value chain, including coal-to-gas switching power projects and LNG supply. The deal follows another signed by the Italian supermajor earlier this year with China to better cooperate on energy issues.

Elsewhere in Asia, Malaysia’s state-owned Petroliam Nasional Berhad, aka Petronas, last week declared force majeure at its Yetagun field in Myanmar after production was depleted. Volumes in the field have been steadily declining, the company said.