The European Union (EU) could be securing another source of future natural gas supply, this time from Azerbaijan, as member countries continue to prepare for a future without Russian gas. 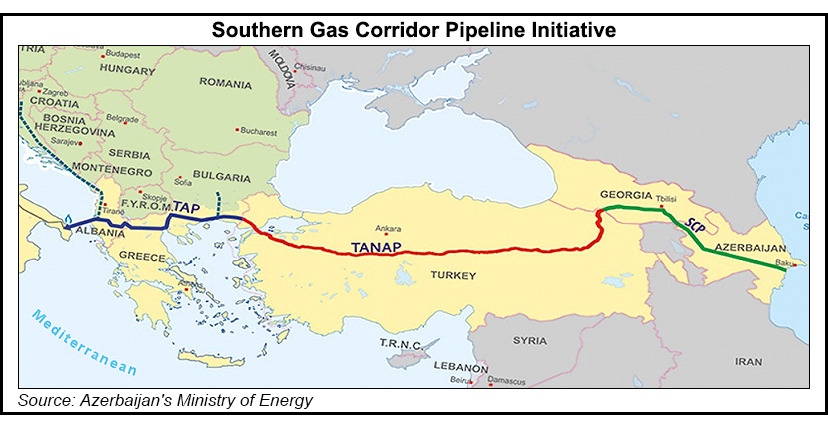 According to a draft European Commission (EC) memo, the EU and Azerbaijan could “aspire to support bilateral trade of natural gas” to the continent and expand major pipelines in the region, according to  multiple news media reports. A Southern Gas Corridor initiative connecting gas supply from the Caspian and Middle East regions has been proposed since 2008 as a way to reduce dependency on Russia.

If approved by the Commission, the EU could receive at least 20 billion cubic meters (Bcm) of natural gas (706 Bcf) from Azerbaijan by 2027. Delegates from Azerbaijan are expected to meet for bilateral discussions on July 19 and EU officials are traveling to the country later in the month.

Azerbaijan has an estimated 1.3 trillion cubic meters of proven natural gas reserves, according to the International Energy Agency. BP plc, which operates in the Shah Deniz gas field, has called it one of the world’s largest, with more than 1,000 Bcm of reserves.

The expansion of the Southern Gas Corridor is also a critical part of the full-scale development of Shah Deniz, according to Azerbaijan’s Ministry of Energy. A plan for stage two development of the field has been mostly backed by BP with a 29.9% stake and Russia’s PJSC Lukoil Oil Co. with a 19.9% stake. If completed, the project is estimated to produce another 16 Bcm of natural gas.

The potential partnership could come a month after the EC finalized a natural gas and LNG partnership between the EU, Israel and Egypt.

Market fears of a supply shortage in the near-term have kept European natural gas markets on the move as Russian flows continue to be halted due to maintenance. The Dutch Title Transfer Facility for liquefied natural gas (LNG) delivered in August closed at more than $47/MMBtu Friday. It was a drop from $51.559/MMBtu the day before and a week high of $53.361/MMBtu.

Analysts with European trading firm Energi Danmark wrote gas markets on the continent remain “under pressure” but were lowering “modestly.”

“All eyes remain on Nord Stream 1 and the speculations about whether or not the pipeline will come back online next week or not,” Energi Danmark analysts wrote. “The market has priced in a lot of risk premium and now waits and sees what will happen with the pipeline next week.”