Natural gas prices in Europe and Asia have leveled off amid warmer weather and strong storage stocks in both regions.

The TTF prompt contract dropped by more than 10% Monday on warmer weather forecasts and the influx of LNG.

Asian spot prices briefly surpassed TTF last week, but winter buying has slowed and the strip shows Europe still has the premium heading into next year. TTF was trading around $35 on Monday, while the Japan-Korea Marker was stable near $30.

Despite comfortable inventories, the depths of winter and the year ahead remain a concern for Europe as the continent managed to fill storage this year with Russian imports that have declined.

“The global liquefied natural gas market is in a wait-and-see mood as participants cautiously monitor weather in the coming week,” said Michael Yip, an LNG analyst at Bloomberg New Energy Finance in a Monday note. “…The upside from colder weather is likely to be more pronounced in Europe as the risk of halted Russian gas flows via Ukraine hangs in the balance.”

Europe is forecast for a warmer start to winter, while weather in Asia is currently expected to be colder-than-normal. That could create challenges for Europe as stocks are drawn down.

Governments across Asia are preparing for competition in the global gas market this season.

South Korea has also made an effort to ease the burden of high gas prices on consumers. Last week, the country extended a tariff reduction on LNG imports to zero through March 31. The LNG tariff was cut to zero late last year.

A 28-day stretch of planned maintenance ended at the Cove Point LNG export terminal in Maryland on Friday, returning about 740 MMcf/d of feed gas demand to the market. According to NGI’s U.S. LNG Export Tracker, feed gas demand in the country is now back near 12.5 Bcf/d, a level not seen since September.

In Asia, meanwhile, Petroliam Nasional Berhad, aka Petronas, is reportedly working to source alternative LNG shipments for cargoes lost after a pipeline leak in early October impacted operations at Malaysia LNG. The company was forced to declare force majeure as a result of the leak.

Most of the plant’s offtakers are in Japan. Shortly after the incident, Kpler estimated the outage would cut three cargoes monthly from global supply volumes. 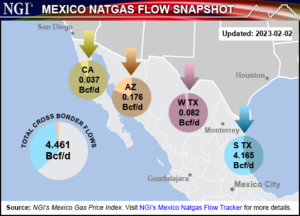 North American natural gas trading has been hijacked by bears, with prices moving lower this week on the back of a healthy supply and storage outlook. The New York Mercantile Exchange (Nymex) futures contract for March is hovering around $2.500/MMBtu, its lowest point in almost two years. Last Friday (Jan. 27), the February Nymex natural…