Natural gas prices in Europe and Asia are moving higher as the market has continued to tighten in a trend that’s setting the stage for a  bullish summer for liquefied natural gas (LNG) exports. 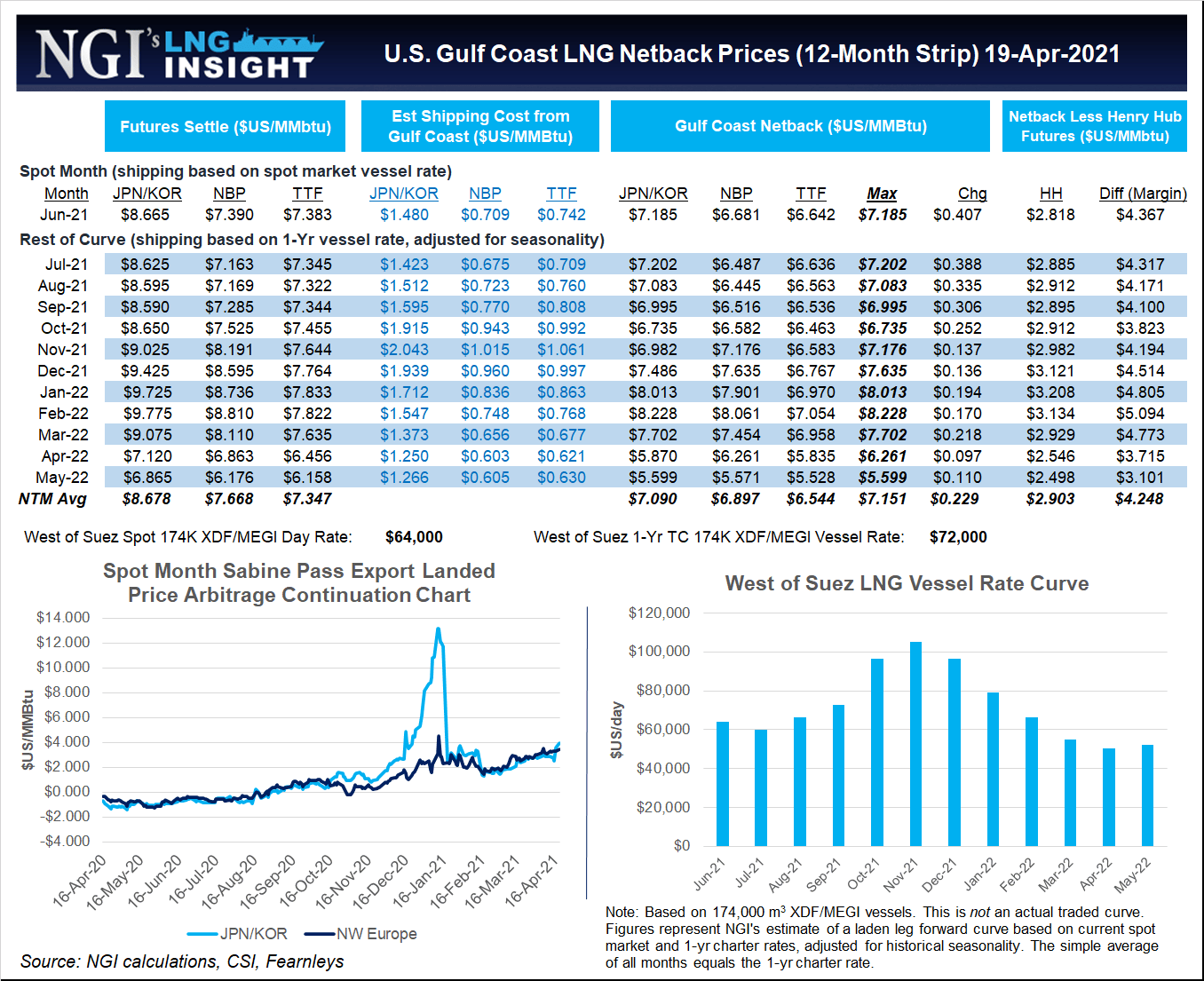 Both the prompt Title Transfer Facility (TTF) and National Balancing Point contracts jumped above $7/MMBtu last week, while Japan-Korea Marker (JKM) futures shot above $8. The strength has spilled into this week as buying remains strong in both regions. All three benchmarks closed higher on Monday and Tuesday.

“The writing is on the wall, the global gas market is incredibly tight right now, and we don’t see this reversing course anytime soon,” said analysts at Tudor, Pickering, Holt & Co (TPH).

In Europe, strong demand in the residential and power generation sectors last week, along with weak Norwegian and Russian pipeline imports contributed to gains. While they dropped Monday, consistently strong carbon prices have also continued to incentivize the use of natural gas for electricity. The colder weather that gripped the continent last week is expected to continue this week, particularly in western and central Europe, according to Maxar’s Weather Desk.

“Although rising, temperatures are expected to remain below normal this week,” said Engie EnergyScan analysts in a Monday note.  “Along with the relative weakness in pipeline supply, this should maintain European gas balances tight and require the continuation of net storage withdrawals.”

European storage inventories are currently at 29% of capacity. TPH said Friday that storage draws over the prior week had totaled 42 Bcf, compared to a five-year average build of 57 Bcf.

TPH analysts added that “given strong Asian demand, it’s difficult to see how Europe will attract enough cargoes to sufficiently restock ahead of winter. As a result, we expect summer prices to look more like winter.”

Indeed, the forward curve currently shows TTF at more than $7 for the summer months, while JKM futures are trading well over $8 through the same period. Gas consumers in Asia are buying consistently to replenish their own stocks after a chilly winter and in preparation for higher demand this summer.

JKM spot prices for the second half of May were assessed on Tuesday at more than $8/MMBtu.

Spreads between the U.S. and key markets in Europe and Asia are incentivizing American exports and setting the stage for a strong summer versus last year when demand plummeted amid the pandemic.

Feed gas deliveries to U.S. terminals have flowed at more than 11 Bcf/d over the last week and close to the record high of 11.92 Bcf/d. The global gas market is even pushing up LNG vessel rates at a time of year when demand typically declines as the shoulder season gets underway.

In Europe meanwhile, Pavel Zavalny, Head of the Russian State Duma’s energy committee said at an online meeting with German lawmakers last week that construction and commissioning of the long-delayed Nord Stream 2 pipeline could be completed by the end of the summer, with first gas possibly arriving around that time. The 745-mile pipeline would move 5.3 Bcf/d of natural gas from Russia to Germany.

Germany’s RWE AG also said last week that it has signed a memorandum of understanding with The Hydrogen Utility Pty. Ltd. to trade hydrogen between Australia and Germany. RWE is aiming to use a planned LNG import terminal in Brunsbüttel, Germany to import the fuel.

In Asia, Tokyo Electric Power Co. Holdings Inc.’s sole nuclear plant is likely to be offline longer after Japan’s Nuclear Regulation Authority issued an order for more inspections that could take over a year, according to the Nikkei. That could stoke additional LNG demand in the country.

In India, the 5 million metric tons/year Hoegh Giant vessel arrived April 12  in Jaigarh. The floating storage and regasification unit (FSRU) is expected to start commercial operations this month and would become the country’s first FSRU terminal.

President Biden is scheduled to hold a virtual climate change summit on Thursday and Friday (April 22-23) that will bring together dozens of world leaders. While limited progress is expected, ClearView Energy Partners LLC said Tuesday the “dynamic could put Biden’s unveiling of a new U.S. nationally determined contribution,” or Paris Agreement pledge, “in the spotlight.”

The effort comes as opposition to fossil fuels continues. Last week, a letter signed by 243 organizations was submitted to the White House calling for an “immediate end” to LNG exports. The organizations represented 27 states and Puerto Rico, along with France, Ireland and one international organization.