Eighteen nations in Europe collectively are ahead of North America in adopting production sites for renewable natural gas (RNG), or biomethane, with growth rising 51% in the past two years, according to the Natural Gas Vehicle (NGV) America trade organization. 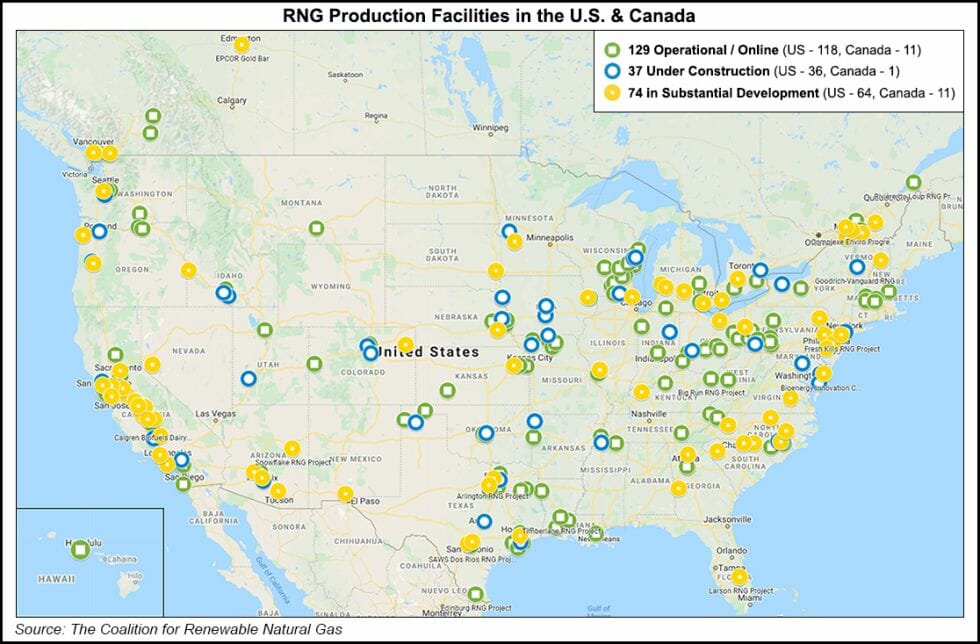 A study earlier this year by the American Gas Association (AGA) Foundation reported 110 RNG production sites in North America, with another 98 either under construction or proposed. Europe has 729 production locations with Germany leading the way at 233, said NGVAmerica general counsel Jeffrey Clarke in a podcast.

“Europe is really ahead of us a little bit,” Clarke said. “It is really getting behind RNG in all sectors, including the transportation sector, where it is experiencing enormous growth.” He said the 18 nations collectively had 483 biogas plants two years ago and has grown to more than 700, according to the European Biogas Association and Gas Infrastructure Europe. France has 131 plants and the UK has 80.

“If you look at this trend, it is a fantastic way to use resources and organic matter that is going to be a continuous source of RNG,” Clarke said. The world has to “deal with waste and in a way that makes sense for humans, and more and more communities are seeing it makes sense to deal with it in a way that produces energy.” RNG also has grown as a fuel of choice for medium- and heavy duty vehicle fleet operators, he said.

In California, where the state has revised its policy toward heavy duty vehicle incentives to require RNG use and near-zero emission engines, a statewide study was released late this month that concludes more than $1 billion will be invested in in-state RNG production facilities, bringing the total number of sites to 160 by 2024.

“At the end of 2019, only 2.7% of the 139.3 million diesel gallon equivalent (DGE) volumes of RNG consumed by California motor vehicles were produced in California,” GNA officials said. GNA then surveyed state and local government agencies, RNG project developers, third party marketers and other sources to determine that by 2024 nearly 120 million DGEs of RNG will be produced in the state.

In the offroad commercial vehicle fleet sector, Plug Power is offering an alternative to battery or diesel-powered forklifts with Fork Truck products, hydrogen fuel cell trucks that have logged more than a billion miles.

“We’re convinced and our customers are confirming the fact that hydrogen is the way to replace diesel to efficiently move goods from the warehouse to any place in the country,” said Plug Power’s Al Cioffi, business development executive. “During this pandemic, about 30% of the groceries and medical products all have been delivered by vehicles using a Plug Power fuel cell and our fuel.”

Meanwhile, NextEra Energy utility Florida Power & Light (FPL) is planning a hydrogen generation plant fueled by solar energy to replace some natural gas at an existing complex. State regulators must approve the project, which could be online in 2023.

The $65 million pilot project bids to use a 20 MW electrolysis system that would replace part of the gas needs for one of three gas-fired turbines at FPL’s Okeechobee generation plant west of Vero Beach.