After a decade of relative stagnation, LNG import capacity in the European Union (EU) and the United Kingdom (UK) is set to increase by 34% in 2024 compared with 2021, according to the U.S. Energy Information Administration (EIA). 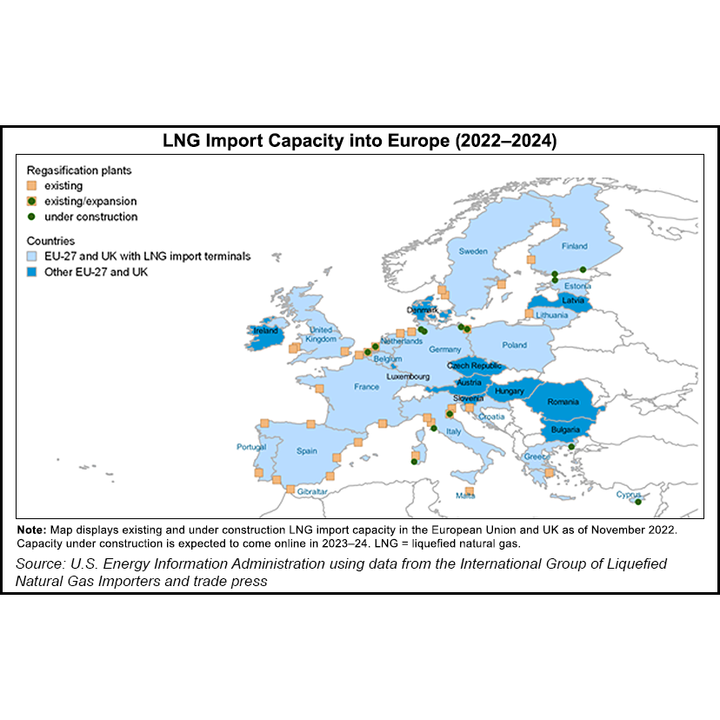 The EIA, citing data from the International Group of Liquefied Natural Gas Importers (GIIGNL) and trade press, said liquefied natural gas import capacity would reach 5.3 Bcf by the end of 2023 and then grow by an additional 1.5 Bcf/d by the end of 2024.

Since Russia’s full-scale invasion of Ukraine in February and the reduction in natural gas pipeline imports from Russia that followed, European countries have reactivated development of previously dormant regasification projects and have started development of new projects.

So far this year, about 1.7 Bcf/d of the new and expanded LNG regasification capacity has been added in the Netherlands, Poland, Finland, Italy and Germany, according to EIA.

The new EemsEnergy terminal in the Netherlands (0.8 Bcf/d capacity) consists of two FSRU vessels and received its first import cargo in September 2022. The import terminal is seen by Dutch power grid operator NV Nederlandse Gasunie as “an important contribution to security of supply” in the wake of Russia’s war on Ukraine.

Management for New Fortress Energy Inc., which also chartered an FSRU into the EemsEnergy terminal, said it wants to move supplies produced at its Fast LNG units to expanding regasification capacity on the continent. NFE does not need to secure customers for the super-chilled fuel as it may sell into the grid at prices tied to the Dutch Title Transfer Facility.

Regasification terminals currently under construction in seven EU countries could add an additional 3.5 Bcf/d of new capacity by the end of 2023: