A European Union (EU) blueprint released last week to reduce methane emissions will not impact the U.S. liquified natural gas (LNG) industry for now because the plan does not include restrictions on emissions from foreign producers, experts told NGI. 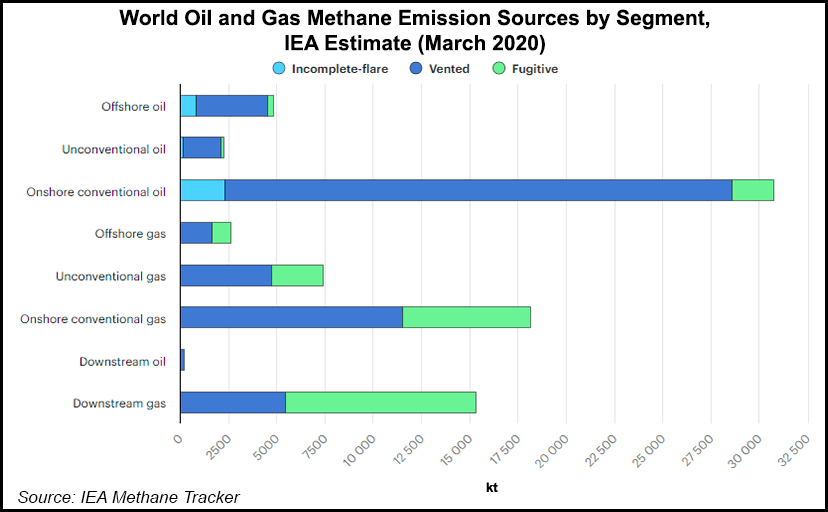 “The methane emissions policies issued by the EU would not have an immediate impact on the ability of any natural gas supplier to deliver to the EU,” said Rice University’s Anna Mikulska, a nonresident fellow for the Center of Energy Studies at the Baker Institute for Public Policy who is an expert on the European energy market.

The so-called EU Methane Strategy published by the European Commission (EC) is designed to reduce greenhouse gas emissions by at least 55% in 2030 compared with 1990. The EC said methane, which typically comprises at least 90% of natural gas, is the second largest contributor to climate change after carbon dioxide (CO2).

It said that 54% of methane emissions in the energy sector are from the oil and gas industry, 34% from the coal sector and 11% from residential and other end-use sectors. Upstream oil and gas operations “generally have a variety of mitigation options that have no net costs, or near zero costs.”

The EC said it would support voluntary initiatives by companies to measure and report methane emissions as well as propose legislation to reduce emissions. The Brussels-based EC is the executive arm of the 27 member-state EU that also proposes legislation.

The EC would support establishing an international methane emissions observatory under the auspices of the United Nations and strengthen satellite-based detection and monitoring through the EU’s Copernicus program.

Legislation is expected to be proposed in 2021 for compulsory measurement, reporting and verification of all energy-related methane emissions, as well as to require improvement in leak detection and repair on all fossil gas infrastructure. The EC is to consider legislation to eliminate routine venting and flaring in the energy sector in the supply chain “up to the point of production.”

The EC said the EU would work with non-EU countries to reduce methane emissions. But the EC warned that “in the absence of significant commitments from international partners” it would consider imposing methane emission reduction targets “or other incentives” on fossil fuels that the EU imports.

“While the EU contributes only to 5% of global methane emissions, it can use its position as the largest global importer of fossil fuels and as a strong player in the agriculture sector to support similar action from global partners,” the EC said.

Mikulska said any measures against producers would only be imposed in “worst-case scenarios” of non-cooperation.

The Trump Administration has sought to rescind Obama-era controls on U.S. methane emissions from the oil and gas industry through regulatory rollbacks and lawsuits.

“Removing methane emission rules by the Trump Administration could potentially become a roadblock but much further down the road,” Mikulska said.

If Trump wins his reelection bid and continues his quest to rescind methane emissions controls, steps to address emissions could be implemented on a state level by regulating venting, among other measures, she said. Also, large international companies are likely to implement methane emissions measures on their own to compete globally, she said.

“It is important to note that methane leaks are lost volumes of natural gas that can be monetized if captured in an efficient and effective manner,” Mikulska said.

Although Europe has been a major market for U.S. LNG in the last two years because of depressed global prices, in the long-term Asia is seen as the main market for U.S. supplies because of potentially higher demand and prices, she said. Russia, Norway and Qatar have cheap supply and are closer to Europe, she added.

U.S. LNG likely would not be as problematic as pipeline gas from the EU’s largest supplier, Russia, “which has a very poor record when it comes to methane emissions, including extensive flaring and venting,” she said.

Charlie Riedl, executive director of the Washington DC-based trade group Center for LNG, agreed that the EU directive for now would not impact U.S. LNG. He said U.S. fossil fuel production is “revered globally” for having reduced emissions. He said U.S. LNG exporters can benefit from EU moves to reduce methane emissions because natural gas is a cleaner-burning fuel.

U.S. LNG exporters do not want to be perceived as producing supplies that are less clean than those from competing countries, he said.

Riedl said if Trump is re-elected and continues to roll back methane emissions restrictions, that could harm prospects for U.S. LNG exporters but it is too early to tell.

Fred Hutchison, CEO of the Washington, DC-based industry group LNG Allies, said LNG largely displaces coal in Asia and Europe so it has a net environmental benefit even with methane leaks and flaring.

“We think that the EU has raised some interesting ideas and it would be useful to create impartial international bodies to work on methane emission reductions,” he said. “It’s clear that producers and consumers need to work together to reduce methane emissions; it will be part of what keeps gas in the global energy mix going forward.”