To help cope with the European energy crisis,  all twenty seven European Union (EU) members approved several measures at a Brussels meeting on Friday, including levies on windfall profits made by fossil fuel companies. 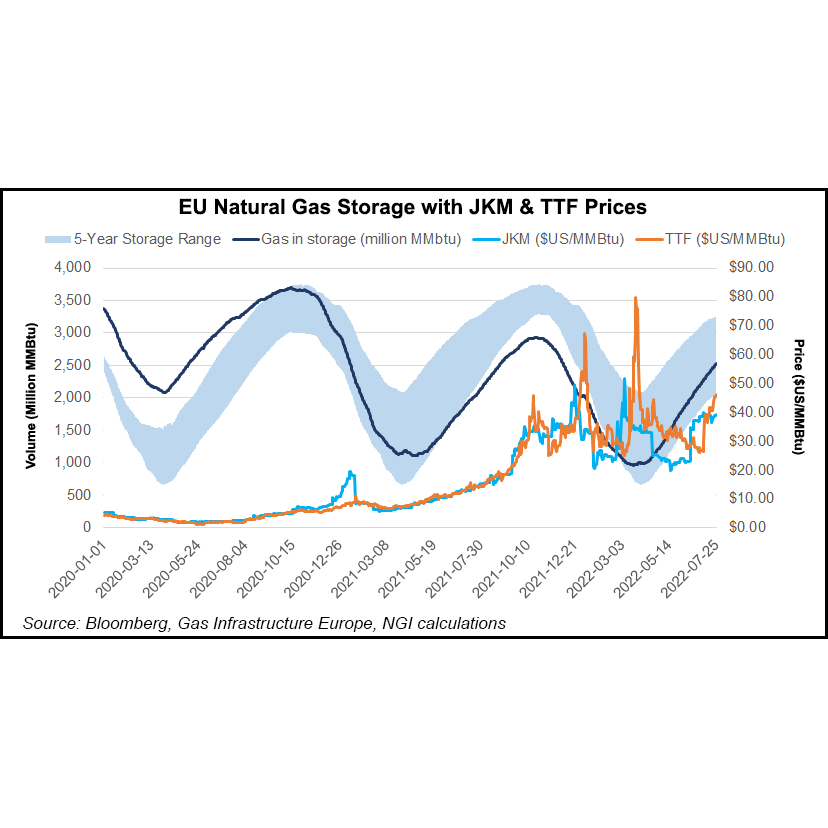 But, after weeks of debate from members and market speculation, a bloc-wide cap on natural gas import prices has been tabled until later in the month.

EU members agreed on natural gas storage targets and cooperation measures earlier in the year to prepare for a possible winter without natural gas that have recently helped stabilize prices, despite an end to NS1 flows. However, heightened commodity costs have also increased economic pressures on members.

In September, the EC outlined a number of energy policies aimed at lessening those pressures, including a possible price cap on both natural gas prices within the bloc and on imported gas.

‘A Huge Lack of Clarity’

Fifteen EU ministers, including envoys from Belgium, France, Greece, Italy, Poland and Spain, signed a letter to EC energy commissioner Kadri Simson, calling for a proposal to set an EU-wide price cap on gas imports. Support for a price cap, the members wrote, is the “one measure that will help every member state to mitigate the inflationary pressure, manage expectations and provide a framework in case of potential supply disruptions, and limit the extra profits in the sector.”

Jonathan Stern, a research fellow at the Oxford Institute for Energy Studies (OIES), said the prospect of an import price cap quickly stirred confusion over what the scope of such a policy should be, and how it would actually be implemented.

“There is a huge lack of clarity on any of these proposals on what could work, or how it would  work, or how long any type of system would take to set up,” Stern said in a  recent OIES podcast.

Officials from Austria, Denmark, Germany and the Netherlands have voiced opposition to policies imposing a fixed price to international sellers. Prime Minister Jonas Gahr Støre, whose country has become western Europe’s largest pipeline gas supplier over the past few months, said he was skeptical the policy would “solve the fundamental problem, which is that there is too little gas in Europe.”

Stern said Norway could be open to a price cap discussion, and may agree to some type of contract for difference “whereby they are paid the difference between the agreed actual price and the market price, as and when the supply/demand issue resolves.”

Germany, which has been relying on massive imports of liquefied natural gas from allies like the United States to fill storage, also poked holes in the effectiveness of a price cap.

“We do not support an absolute maximum limit — in other words, a rigid price cap — because there is a risk that we will then no longer be able to buy enough gas on the world market at this price,” German economy minister spokesperson Susanne Ungrad said on Friday.

The EC has not yet proposed any legislation that would lower wholesale gas prices, but plans to discuss price caps at a ministerial meeting planned in Prague on October 11-12.

Although EU members couldn’t agree on a price cap, all EU members agreed to help raise $140 billion in relief for households and businesses affected by the sharp increase in energy prices.

A levy of at least 33% will be imposed on surplus profits made by oil, gas and coal producing or refining companies. Other proposals include a temporary cap on the revenue from wind, solar, and nuclear power generators companies – and a pledge for EU countries to reduce electricity consumption by 5% during peak hours. The measures were approved during the meeting and will take effect later in the month.

Last week, the German government launched a $195.3 billion package to provide relief for domestic households and companies facing rising gas prices. The government plans to set a gas price and pay the difference between the set price and the market import price, similar to a plan introduced in the United Kingdom.