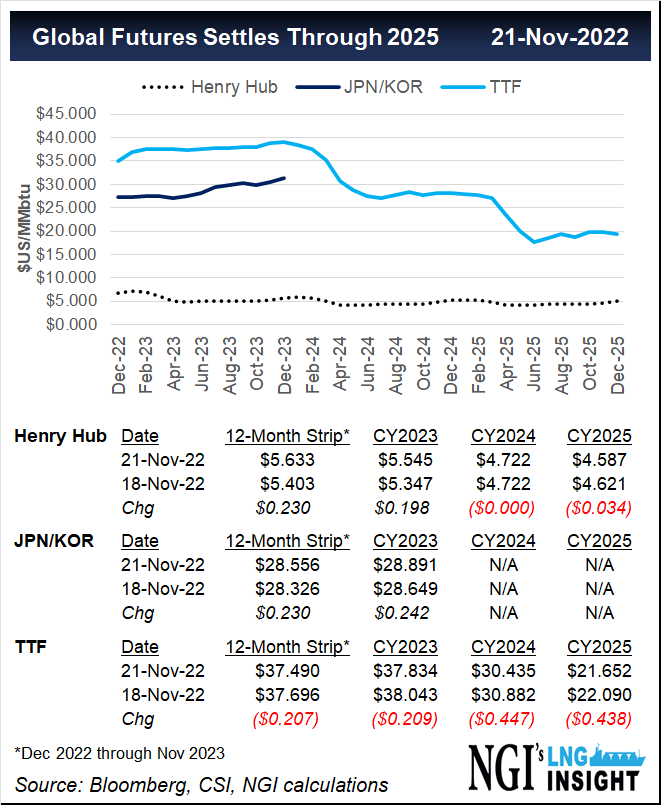 In a proposal outlined by the European Union’s (EU) executive branch Tuesday, the Commission could institute a “safety price” mechanism by the beginning of the year that would allow regulators to order financial institutions not to accept prompt month gas purchases that exceed the emergency price ceiling.

“Gas prices in the EU have fallen since August thanks to demand reduction, mandatory storage filling, diversification of supplies and other measures proposed by the Commission in recent months,” Simson said. “But we have been missing in our toolkit a way to prevent and address episodes of excessively high prices. Today, we propose to put a ceiling on the TTF gas price to protect our people and businesses from extreme price hikes.”

TTF prices have remained well above historical averages since the end of last year, but they’re currently trading below the proposed threshold. Since Russia began curtailing pipeline flows to the continent and buyers have scrambled for supplies throughout the year, prices have at times surged above $100.

At a previous emergency meeting in October,  15 of the 27 EU member countries including France, Italy, Poland  and Spain supported some type of price cap. Other countries like Germany, Ireland and the Netherlands opposed the idea. German and Dutch officials have specifically questioned a price cap’s potential impacts on securing supplies and competing with other international buyers for LNG cargoes.

To limit a potential freeze on Europe’s ability to secure cargoes, the EC said the policy was specially applied only to TTF futures and only when extreme prices were sustained over a period of time. The Commission also included proposals to deactivate the ceiling by an EC decision if the policies are deemed to impact financial stability or EU gas flows.

Policymakers wrote that “market operators will still be able to meet demand requests and procure gas” while the ceiling mechanism is activated by going to the spot market and using over-the-counter (OTC) transactions. In a letter voicing opposition to a price cap, members of the Association of European Energy Exchanges, aka Europex, wrote the shift would cause even more instability during a time of crisis.

“If the real price of gas exceeds the artificially capped price of the TTF front-month future, market participants will immediately move trading into the bilateral OTC space,” said Europex Secretary General Christian Baer. “Such a move would not only lead to a significant decrease in transparency, but also poses serious financial stability risks.”

Goldman Sachs Commodity Research analysts recently estimated that Europe could exit the winter comfortably with storage inventories at 30%. However, they also predicted sustained market tightness that could be exacerbated if China returns to the market after a lull in buying due to Covid-19 outbreaks.

Many analysts expect 2023 to bring more record-breaking prices as the EU will again have to refill storage ahead of next winter, which could prove even more difficult given the steep decline in Russian imports this year.

Craig Pirrong, a finance professor at the University of Houston, said it was hard to see how a price cap could ease the burden facing European energy markets.

“There is no problem that price controls can’t make worse,” he told NGI. “Binding controls will reduce supplies to Europe, and potentially result in blackouts, idle factories and cold homes. Binding caps would also wreak havoc on the derivative markets.”