The European Union (EU) has approved grants for its member states to increase the use of liquefied natural gas (LNG) as a transportation fuel for ships, cars and trucks. 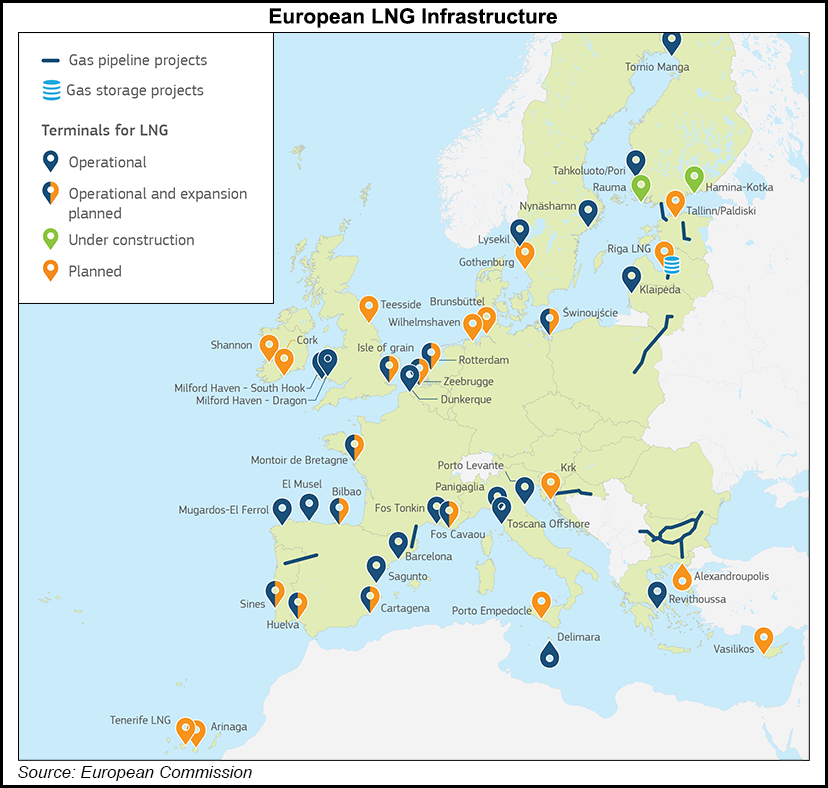 The funding, approved earlier this month, is part of a 2.2 billion euro ($2.6 billion) package to support 140 transportation projects in the EU.

Of that amount, a combined 142 million euros ($167 million) was awarded to 19 projects to promote greener fuels.

Titan LNG, a leading LNG supplier to the European marine and industrial markets, was among several firms awarded funds to expand the use of LNG in marine bunkering. Titan was granted 11 million euros ($13 million) to help fund three bunker barges in Zeebrugge, Belgium; Rotterdam, The Netherlands; and  Lubeck, Germany, for its Bio2 Bunker project, which uses liquefied biomethane (BLNG) as part of the LNG fuel supply.

The two barges in Belgium and Germany will be similar to Titan’s two existing FlexFuelers, while the company said it would build a  “mothership” called Titan Hyperion for the Amsterdam-Rotterdam-Antwerp region that would resupply the FlexFuelers.

Spanish firm Enagas received about 13 million euros ($15 million) to support the construction of 15 LNG fueling stations and one hydrogen fueling station for cars and heavy road vehicles. The facilities would be located along the Spanish corridors of the Trans-European Transport Network. They would be part of Enagas’ ECO-net project and would be developed by an Enagas start-up called Scale Gas.

“Spain is the European country with the most LNG terminals for supply to ships thanks to its geostrategic position and the strength of its infrastructure,” Enagas said. “With the ECO-net Project, Enagas is seeking to move in the same direction in the area of vehicle mobility, especially in the heavy transport sector.”

The EU awarded most of the money, 1.6 billion euros ($1.9 billion), to support 55 rail infrastructure projects along the trans-European transport core network. Those include the Rail Baltica project, which integrates the Baltic States in the European rail network, and the cross-border section of the railway line between Dresden, Germany and Prague, Czech Republic, the EU said.

“The 2.2 billion euro EU contribution to this crucial transport infrastructure will help kick-start the recovery, and we expect it to generate 5 billion euros in investments,” said EU Commissioner for Transport Adina Valean. “The type of projects we invest in ranges from inland waterways transport to multimodal connections, alternative fuels to massive railroad infrastructure.”

Other LNG projects that were awarded funding included:

There are separate drivers for the adoption of LNG as a fuel in three European geographical regions, maritime classification society Det Norske Veritas (DNV) said.

The main driver in northern Europe has been that sulfur content of marine fuels has been limited to 0.1% since 2015.

In central Europe, the reduction of nitrous oxide emissions from inland waterway vessels is a primary driver for increased use of LNG as a bunkering fuel. In addition, bottlenecks in regional gas pipeline networks are driving the increased use of LNG for other uses, DNV said.

Southwestern Europe imports significant volumes of LNG at multiple terminals, with some of those supplies transported by truck to more remote areas that are not well connected to the pipeline grid, DNV said. The major driver for increased use of LNG as a bunkering fuel in the region is for import facilities to sell supplies to vessels that pass through the Mediterranean Sea on European-Asian trade routes, the DNV said.