European regulators have launched the second phase of an antitrust investigation concerning the mega-merger of Halliburton Ltd. and Baker Hughes Inc. 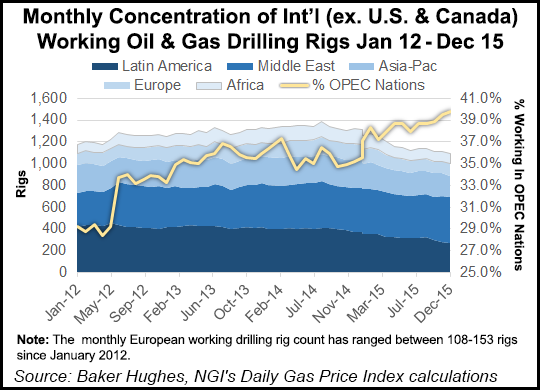 The decision leaves Halliburton, which had planned to close the $34.6 billion merger before the end of 2015, still facing competition reviews in the United States and Europe. The European Union (EU) review could last until May 26; the U.S. Department of Justice (DOJ) has an April 30 deadline for its review (see Daily GPI, Dec. 15, 2015).

“Halliburton expects to offer a substantial remedies package that it believes will address any substantive competition concerns,” the No. 2 oilfield services (OFS) operator said Tuesday. Halliburton and Baker, the No. 3 operator said it remains focused on completing the transaction.

The European Commission, the regulatory arm of the EU, said it has “serious potential competition concerns” in more than 30 product and services lines between the two operators, both headquartered in Houston.

“The commission has to look closely at this proposed takeover to make sure that it would not reduce choice or push up prices for oil and gas exploration and production services in the EU,” Commissioner Margrethe Vestager said. “Efficient exploration and production of oil and gas resources within the EU form an important element of our Energy Union strategy in terms of ensuring security of supply.”

Only Schlumberger Ltd., the No. 1 OFS, Halliburton and Baker offer integrated OFS solutions in Europe, the EU said. Reducing those offerings to two companies “may lead to less choice and potentially higher prices for customers” and “reduce the incentive to innovate, especially given that Halliburton and Baker Hughes currently compete fiercely with each other in developing new products.”

Halliburton and Baker already are planning to sell assets to assure the merger’s completion. However, DOJ had said last month it “does not believe that the remedies offered to date are sufficient” to address its antitrust concerns. Australia and Brazil also have expressed antitrust concerns about the deal.

Halliburton warned in December that there was “no guarantee an agreement with the DOJ or other competition authorities will be reached.”

Halliburton would have to pursue the acquisition through litigation if deals are not struck with the regulating bodies. The pending acquisition has received regulatory clearances in Canada, Colombia, Ecuador, Kazakhstan, South Africa and Turkey.

If a negative regulatory review were to scuttle the merger, Halliburton could be obligated to pay Baker $3.5 billion.