Call it the marriage that didn’t quite make it to the altar. 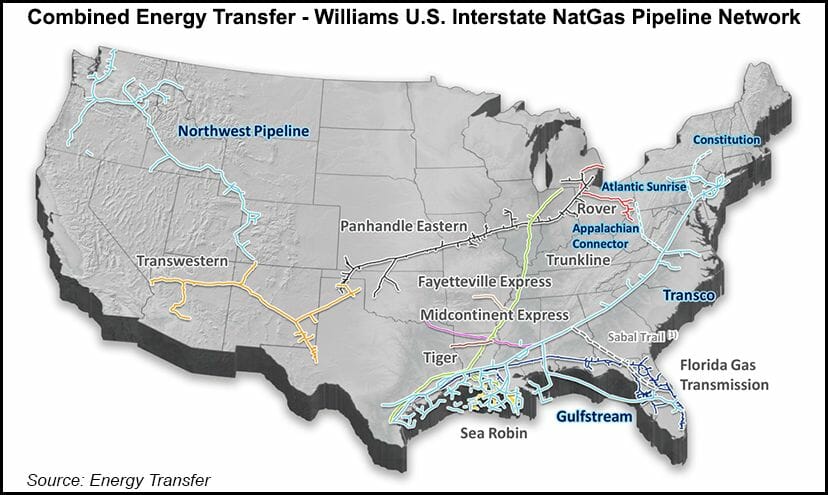 On Wednesday, Energy Transfer Equity LP (ETE) announced what many had been expecting for months: that it was terminating its merger agreement with The Williams Companies Inc., effective immediately.

The decision to pull the plug comes less than one week after a Delaware Chancery Court judge ruled ETE did not violate the terms of the merger agreement with Williams. Specifically, ETE failed to receive an opinion from its tax attorneys with the firm Latham & Watkins LLP on a transaction between Energy Transfer Corp. LP (ETC) and ETE (see Daily GPI, June 24).

None of that sat well with the jilted “bride.”

“Williams recognizes the practical fact that ETE has refused to close the merger,” Williams said, adding that it “has concluded that it is in the best interests of its stockholders to seek, among other remedies, monetary damages from ETE for its breaches. So, while taking appropriate actions to enforce its rights and deliver benefits of the merger agreement to its stockholders, Williams will renew its focus on connecting the best natural gas supplies to the best markets.”

On Monday, Williams had said preliminary results showed more than two-thirds of its shareholders voted for the proposed merger (see Daily GPI, June 27). Williams also hinted that it would take legal action against ETE if it attempted to scuttle the deal.

Scott Bakal, co-chair of the taxation practice group with the Chicago-based law firm Neal, Gerber & Eisenberg LLP, told NGI on Wednesday that the Delaware Chancery Court’s ruling last week “describes a complicated and unusual transaction, but one of the more unusual aspects of the proposed transaction is that ETE would have ended up owning stock of one of its partners, creating a circular ownership arrangement.”

That arrangement, Bakal said, would have occurred after ETE purchased $6 billion of equity interests in ETC, the successor company following the merger with Williams. He said two years after the closing, ETE could have purchased additional ETC shares in connection with cashing out the contingent consideration rights.

Bakal said such a move is commonly referred to as a “May Company transaction,” and temporary regulations governing them were issued in June 2015.

“The proposed ownership of ETC shares by ETE raises the issue of whether the IRS might have viewed ETC as having disposed of a portion of its assets in a taxable transaction,” Bakal said.

The proposed merger initially was valued at $37.7 billion but the deal is now valued at about $20 billion (see Daily GPI, March 24). Investors have since soured on midstream master limited partnerships, and ETE’s shareholders have had doubts about the merger (see Daily GPI, Feb. 25; Oct. 22, 2015).

Earlier this month, Williams said the original projection that a merger with ETE would create more than $2 billion in annual synergies by 2020 was inaccurate, and they now are valued at about $126 million (see Daily GPI, June 20; Sept. 28, 2015). Nevertheless, Williams’ board of directors have offered its shareholders a special dividend of 10 cents/share should they vote to approve the merger.