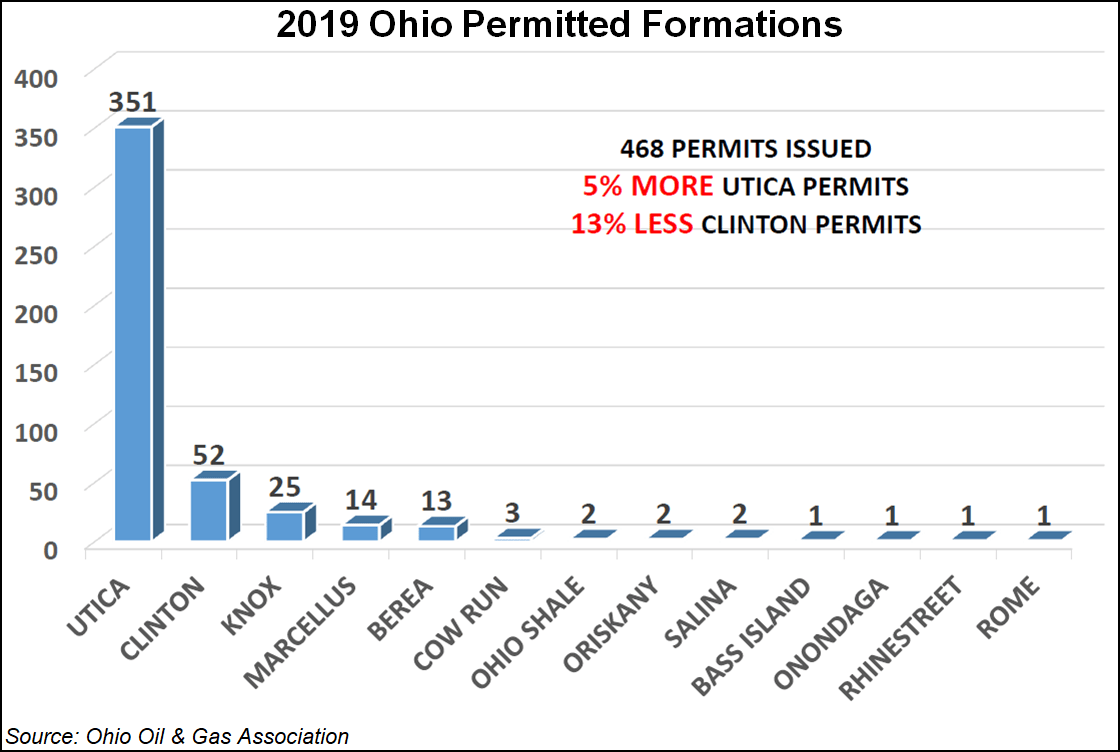 The bulk of last year’s oil volumes, or 24.9 million bbl, were produced by horizontal wells mostly drilled to the Utica Shale. Conventional vertical wells drilled to shallower formations such as the Clinton Sandstone accounted for 2.9 million bbl, according to Debrosse report estimates. While the state’s horizontal well operators are required to report production data quarterly, vertical operators report are required to submit their data every year by March 31.

Beyond oil volumes, many of the metrics included in the OOGA report remained steady. Drilling permits in the state fell 5% year/year to 468, while completions were flat over the same time at 406.

Similar to 2018, Ascent Resources LLC at No. 1 and Gulfport Energy Corp. at No. 2 were the state’s most active operators by wells drilled last year. An affiliate of Encino Energy LLC, which acquired all of Chesapeake Energy Corp.’s Utica assets in 2018, displaced Antero Resources Corp. as the third most active operator. Appalachian pure-play Antero has shifted its focus to liquids-rich acreage in West Virginia as gas prices have fallen.

Overall, footage drilled by operators was flat in 2019, but still high at 6.5 million feet as producers continue drilling longer, more efficient wells. Last year’s total was well above the 1.8 million feet drilled in 2011, when the first commercial Utica production was reported.

The Debrosse report also counted 41 companies that completed wells in the state last year, roughly in line with the 38 recorded in 2018. Before the Utica land rush got underway in 2008, there were more than 180 exploration and production companies working in the state, but that number has declined every year since as assets in the basin have been consolidated by dominant operators. From 2011-2013, as Utica activity steadily increased, there were more than 100 independents at work, according to the report.