The Federal Bureau of Investigation (FBI) is asking the public for help with an investigation into a theft of intellectual property, as well as other items, that occurred last year at an energy company in Houston’s energy corridor. One concern is that the theft might be related to espionage. 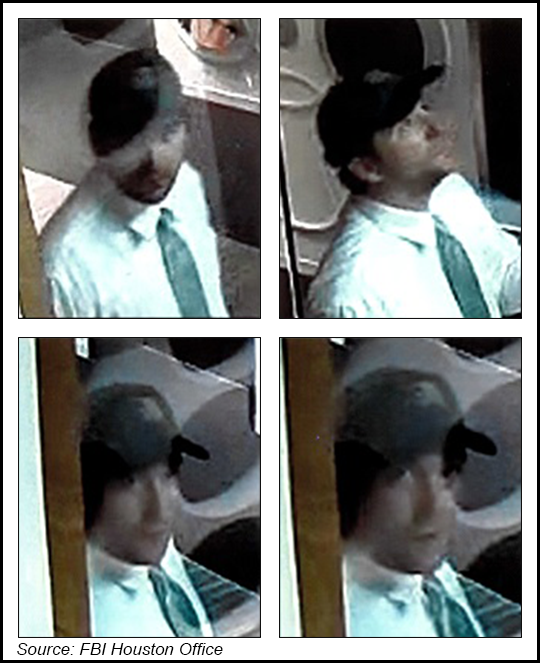 The “Fortune 500” company is not being identified at its request. Thefts occurred in 2015 on June 25 and again on Dec. 30. Surveillance video suggests that the same man is responsible, said the FBI, which became involved in the investigation after the first incident, spokeswoman Shauna Dunlap told NGI.

“On June 25, 2015, at approximately 3:00 a.m., the burglar gained unauthorized access into the building through a defective door,” the FBI said. “After spending a couple of hours inside the facility, the man exited the building around 5:00 a.m., with both company property and property belonging to its employees, including a backpack.

“On Dec. 30, 2015, at approximately 3:25 a.m., the same man attempted to enter the same Fortune 500 company. This time, the man was unable to get into the secure area of the building. Instead, he stole a security radio from a desk in the lobby on his way out.”

The security video shows what is believed to be a white male, about 35-45 years old, between five feet, nine inches and five feet, 10 inches tall with a medium build and dark hair. During the June theft, the suspect had facial stubble and a thin goatee. He wore a light-colored long-sleeved collared shirt, tie, khaki pants, dark green baseball cap and black athletic shoes with orange markings. During the December theft, the suspect was clean-shaven and wore a light gray long-sleeved collared shirt, khaki pants, tan baseball cap, and black athletic shoes. During both incidents, the man had a noticeable tick — upper body twitching of his head, neck, shoulders and arms.

To see the surveillance video, go to https://youtu.be/ExSfoRidYuw.

Crime Stoppers of Houston is offering a reward of up to $5,000 for information leading to the identification and arrest of the suspect. Those with information can call the Crime Stoppers tip line at (713) 222-TIPS (8477); text TIP610 plus the tip to “CRIMES” (274637) or visitwww.crime-stoppers.org.

Houston’s energy corridor is west of the downtown business district in an area north and south of the Interstate 10 corridor. Dunlap said the FBI agreed not to disclose the company’s name or specifics about its location. She said the FBI was not brought into the case immediately but after earlier attempts to identify the individual after the first break-in.

Dunlap declined to provide details on the investigation, such as whether an employee, former employee or some other insider was suspected.

The increase in suspicious activity reports involve energy companies as well as academia, Dunlap said. “We have no…indication that this particular individual has targeted other companies, but it’s certainly a concern and something that we’re hoping to resolve.

“When you look at his activities, he’s very brazen. He spent several hours in that company the first time…walked in empty handed and came out with a backpack and a shoulder bag that was clearly full of stolen items. Our question is what caused him to come back. Was there something that he was looking for that he didn’t get?

“It begs the question, was he just targeting this company or could he be targeting more…We don’t know and we’re not going to know until we identify who this individual is and hopefully speak with him. If he’s working with a competitor; if he’s working with a foreign adversary; if he’s providing the stolen items to a competitor or a foreign adversary, then it’s a much more serious matter…”

Those with concerns about espionage or insider threats may contact the FBI Houston Strategic Partnership Coordinator at Economic_Espionage@ic.fbi.gov or visitwww.fbi.gov/investigate/counterintelligence.