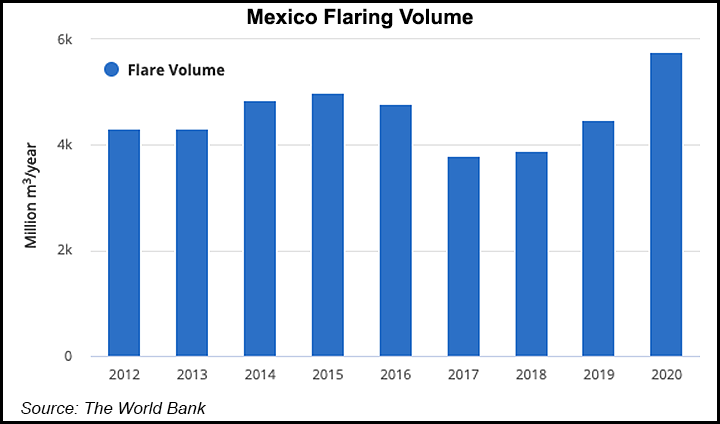 Pemex flared 712 MMcf/d of natural gas in the first quarter of 2021, up from 472 MMcf/d in the similar 2020 period. The quarterly figures appear to be part of a larger trend, according to the World Bank’s Global Gas Flaring Tracker published in late April.

Researchers found that flaring in Mexico, where Pemex is the primary oil and gas producer, rose year/year (y/y) in 2020 for a third straight time to 5.77 billion cubic meters (Bcm) from 4.48 Bcm in 2019.

The 28.8% increase occurred despite oil production remaining essentially flat at around 1.7 million b/d.

This marked the fourth straight y/y increase in flaring intensity for the 100% state-owned firm.

The flaring figures follow a study led by the Environmental Defense Fund that found alarmingly high levels of methane pollution from gas processing facilities owned by Pemex in southeastern Mexico.

The emissions were found to mainly be caused by incomplete gas flaring at the centers in Mexico’s largest producing region across the states of Chiapas, Tabasco, Veracruz and the coast of Campeche.

In the downstream segment, meanwhile, Pemex has ramped up production of HSFO under President Andrés Manuel López Obrador.

A bill to give priority treatment to state power utility Comisión Federal de Electricidad (CFE) over private sector generators was nicknamed the “fuel oil law” by critics. It has been seen as a way to ensure the dispatch of power from CFE’s fuel oil power plants despite the availability of cheaper private energy sources.

A study this month by the think tank Mexico Evalua found Pemex to be among the top three global oil firms in terms of ESG risk. That is due in large part to its downstream subsidiary Pemex Transformación Industrial, aka Pemex TRI.

Researchers cited that carbon dioxide emissions from Pemex TRI rose by 32% from 2018 to 2019 alone. Emissions of sulfur oxides rose by 69% over the same span.

The Mexico Evalua team found that Pemex does not have clear strategies to mitigate these increases, “and that it is not a priority for the company.”

Researchers warned that if Pemex doesn’t improve its ESG risk management, “it will be excluded from the best financing options in the coming years…”

In a presentation to investors this month, Pemex said it is “investing in the conclusion of” a coker plant project at its Tula refinery, “which will allow Pemex to obtain more gasoline and diesel and reduce fuel oil production.”

The presentation made no mention of flaring, emissions or ESG.

“I would love to see an oil company that was designing a strategy that allowed it to adapt to this new reality,” local energy expert Rosanety Barrios told NGI’s Mexico GPI, “and a transition to advance in [the] energy transition.

“None of this is occurring.”

By comparison, heavy fuel oil accounted for only 1.4% of refined products output in 1Q2021 for the largest U.S. oil refiner, Marathon Petroleum Corp.