Exceptionally harsh winter weather that surprised Texas authorities was the leading cause of widespread generator outages that left millions of residents without power for days in February, a new report says. 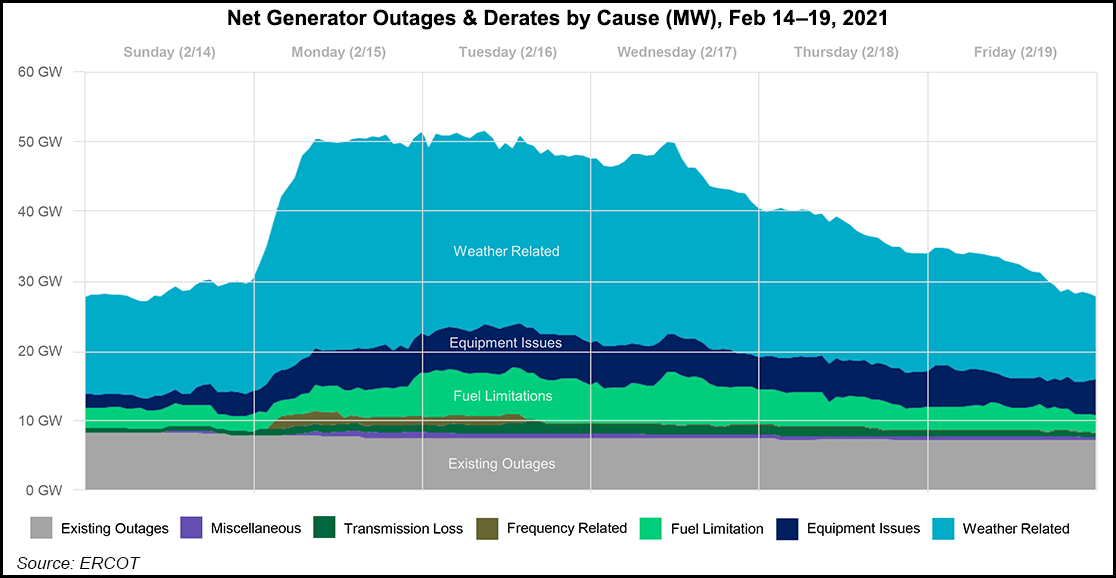 The initial findings from the Electric Reliability Council of Texas (ERCOT), which oversees electric power in the state, amplified the already widely reported thinking of independent analysts that energy facilities and infrastructure in the state were ill-equipped to withstand a prolonged deep freeze. Half of the generation in ERCOT was forced offline during the storm.

A polar vortex that swept deep into the Lower 48 brought frigid air and snow as far south as Houston – a rarity. Average temperatures were about 30 degrees below normal during the Feb. 14-19 deep freeze that crippled the Texas energy grid. Without heat as temperatures plunged, more than 100 people died.

Teri Viswanath, lead energy economist at Denver-based CoBank, said the Texas blackouts “may prove the costliest natural disaster that the state has ever experienced.”

In a letter and presentation sent to Public Utility Commission of Texas Chairman Arthur D’Andrea this week, ERCOT emphasized that its findings were preliminary and that, following more extensive research, it expected to deliver a final analysis by August.

In the report this week, ERCOT attributed 54% of outages to Winter Storm Uri. “This includes but is not limited to frozen equipment — including frozen sensing lines, frozen water lines and frozen valves — ice accumulation on wind turbine blades, ice/snow cover on solar panels, exceedances of low temperature limits for wind turbines and flooded equipment due to ice/snow melt,” according to the report.

Other causes noted by ERCOT were linked to issues that existed prior to the storm, including planned shutdowns (15%) and equipment problems unrelated to weather (14%).

The report, however, did not provide details about the causes of specific outages or how they could have been prevented.

The grid operator has faced widespread criticism in the weeks since the mass outages. Several board members have resigned and President and CEO Bill Magness was forced out. Federal regulators are probing, and Texas Gov. Greg Abbott called for an emergency investigation.

The power failures were “absolutely unacceptable and can never be replicated again,” Abbott told reporters in the immediate aftermath of Uri.

The Texas Attorney General’s Office also is investigating the price spikes that occurred in the natural gas and power markets during the historic winter freeze. Prices at the Houston Ship Channel hub shot up to $400.000/MMBtu on Feb. 16 and remained sharply elevated for days.

CPS Energy, the largest municipal utility in the country, filed a $2.5 billion lawsuit against ERCOT in March. It accused the grid operator of gross negligence.

“February’s fiasco is likely to spawn tens of billions of dollars of lawsuits,” said Andy Weissman, CEO of EBW Analytics Group. “The experience of 20 years ago after the Enron crisis in California suggests litigation could take a decade or more to resolve.”

ERCOT said it would deliver its new report to Texas lawmakers. It is not yet clear if state legislators would take action to require utilities to weatherize infrastructure and guard against future winter storms. But a bill that could authorize seven-figure fines to companies that fail to harden their systems has passed the Texas Senate and is now up for consideration in the state House.