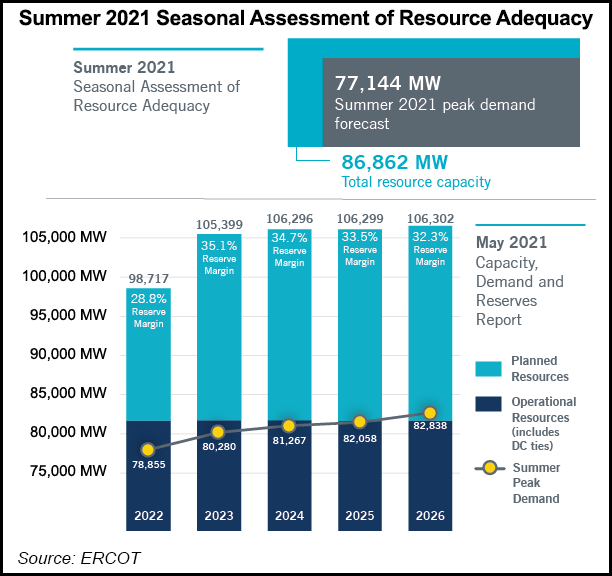 The power grid operator for about 90% of Texas also said it has taken steps to improve transparency following the power crisis it experienced during Winter Storm Uri.

ERCOT is forecasting peak load of 77,144 MW during what is forecast to be a hot, dry summer. It said continued economic and population growth also would drive power consumption.

ERCOT said it has identified “low-probability, high-impact” situations similar to the February winter event in its seasonal assessments. This would ensure that all market participants and government officials have a “comprehensive view” into market conditions. It also would allow the market to more fully plan and prepare for even the most remote possibility, it noted.

Uri, for example, was a one-in-100 event, based on available meteorological data, ERCOT said. Under the worst of the scenarios included in the forecast, the grid operator would fall 14,000 MW short.

[Climate Check: Tune into NGI’s Hub & Flow podcast about President Biden’s climate commitments and how that might affect the U.S. natural gas industry.]

“While the risk for emergency conditions remains low this summer based on many of the scenarios studied, a combination of factors in real time, including record demand, high thermal generation outages and low wind/solar output could result in tight grid conditions,” said Vice President Woody Rickerson, who oversees Grid Planning and Operations. “We cannot control the weather or forced generation outages, but we are prepared to deploy the tools that are available to us to maintain a reliable electric system. We hope this report helps market participants prepare to assist the grid if needed.”

The new scenarios, according to Rickerson, reflect ERCOT’s “commitment to improve transparency and visibility into the market and the factors that affect reliability, even when there is a very remote possibility of these events happening.”

ERCOT’s CEO was fired in the wake of the February freeze, and several members of the board, including the chair, resigned. Last month, Brad Jones, previously the chief executive of the New York Independent System Operator, was tapped to lead ERCOT until a permanent CEO is hired.

Grid officials plan to visit some power plants in the state to review summer weatherization plans. While plant visits have occurred in the past for winter weatherization, this would be the first visits to ensure summer reliability.

ERCOT is monitoring current drought conditions, but officials said there is no significant risk at this time. It is also coordinating with transmission service providers to limit planned outages. Grid officials have asked generators to contact gas suppliers to identify any pipeline activities that may impact supply.

ERCOT said it is monitoring new operational risks that have resulted from changes in the power generation stack. A significant amount of utility-scale solar resources has been added to the grid. At the end of April, utility-scale solar and battery storage projects accounted for almost 80% of the new resources that are being considered for interconnection.

“While tight grid conditions have historically been limited to the hours of highest electric consumption, ERCOT now sees the potential for tight conditions during low-wind conditions, or during the early evening hours when solar resources come offline,” it said. “As the capacity of battery storage increases in ERCOT, these resources are expected to help mitigate some of this risk.”