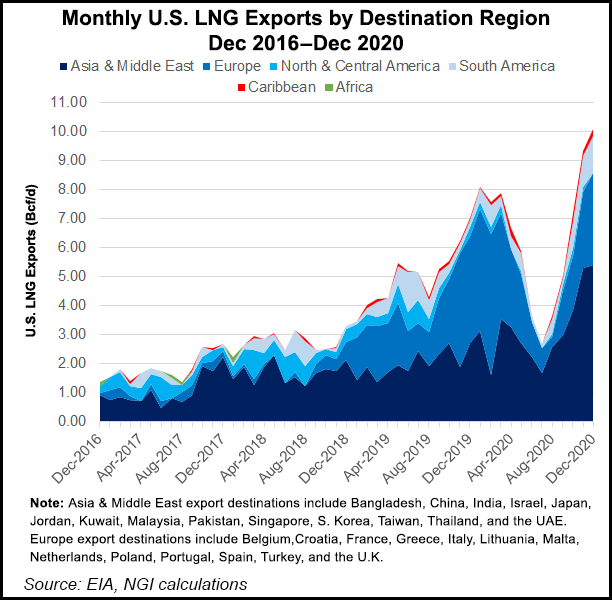 “When we talk to people, they expect the price which was available during Covid,” Kumar said at CERAWeek by IHS Markit.

That makes it difficult for aggregators like Gail to sell the LNG to domestic retail and industrial customers that have bought under long-term contracts signed years ago when prices were lower.

India is expected to be a big buyer of U.S. LNG in the coming years as it aims to make the jump from coal to natural gas power.

However, Kumar mentioned recent conversations with industrial customers looking to pay $5-6/MMBtu to use gas over coal. When the Japan Korea Marker benchmark swung to $18 last month, “demand dried up suddenly,” he said.

Gail signed a sales and purchase agreement with Cheniere Energy Inc. in 2011 for 3.5 million metric tons/year from the Sabine Pass LNG facility in Louisiana. The 20-year contract term commenced in 2018.

Large project sponsors like Cheniere are dependent on the long-term contract structure to finance their developments. Freeport LNG CEO Michael Smith said earlier at CERAWeek that he believes the market is becoming too reliant on spot deliveries. However, developers have made some concessions to buyers over the years, such as eliminating destination clauses.

Cheniere’s chief commercial officer Anatol Feygin said the company would continue to search for ways “to bridge that gap that properly shares the risk between buyers and sellers.” However, he also said that U.S. contract structures had helped to rebalance the market last year by allowing customers to cancel cargoes for a fee.

“The cancellations that we saw throughout 2020 with the demand shock of coronavirus helped prove that that model is robust, both for the financing market and the capital that’s employed in these mega projects, as well as for the commodity itself, ensuring that the market rebalances as quickly as possible.”

“Portfolios are being built and apportioned according to diversity of risks,” Earl said at the conference. “So I think that’s where the contract diversity exists, and different apportionment of risk exists.”

For his part, Kumar said he would like to see sellers agree to price review clauses and index contracts to the West India Marker instead of the Henry Hub benchmark favored by U.S. developers.

“When the contracts were entered, at that point of time, there was a lot of arbitrage between the Asian price and the American Henry Hub-based LNG,” he said. “But today that arbitrage has vanished.”