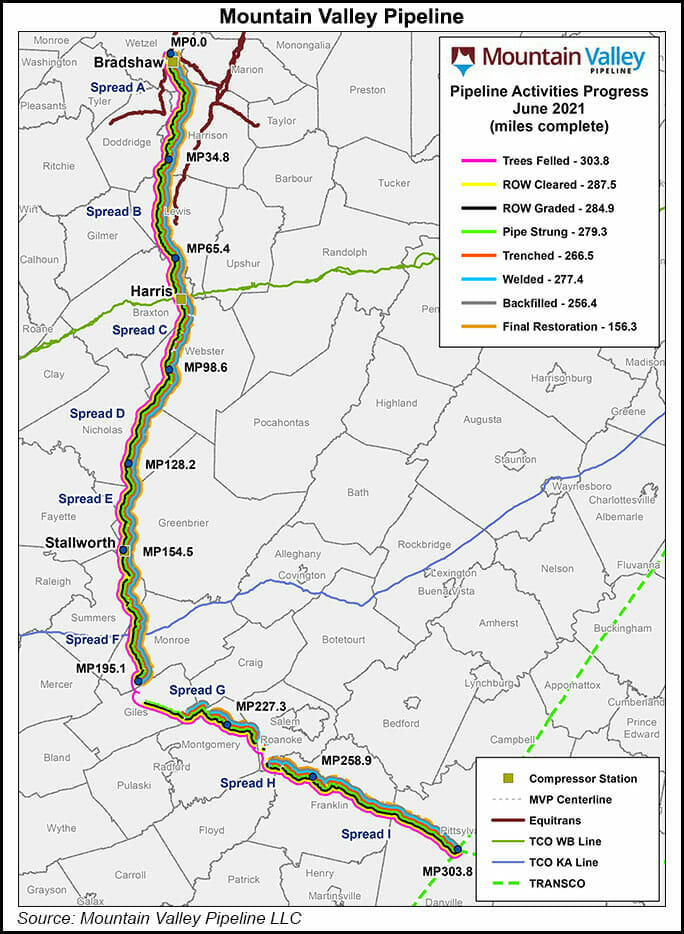 Since receiving approval from FERC in 2017, the project has faced numerous adverse legal and regulatory decisions that have delayed completion of the 303-mile, 2 million Dth/d Appalachia-to-Southeast pipeline.

EQM, which would have a 48.1% ownership stake and operate the pipeline, still remains committed to seeing MVP across the finish line. Doing so would require new federal permitting, CEO Thomas Karam told analysts and investors during a conference call to discuss 2Q2022 results.

“After extended review of the recent court decisions and discussions with federal agencies, external counsel, and our partners, we believe the path forward is to pursue new permits from the relevant federal agencies. Along with the agencies, we recognize the scrutiny that these permits will inevitably face,” Karam said.

“However, we have confidence that the agencies can produce not only technically sound permits, as they have in the past, but also permits that connect the dots between the technical decisions and the respective federal law, effectively mitigating potential perceived ambiguities.”

What About The Permitting Process?

Earlier this year, the U.S. Court of Appeals for the Fourth Circuit struck down key federal permitting needed for compliance with the Endangered Species Act and to allow for construction through national forest lands along the West Virginia/Virginia border.

“We are focused on everything within our control and at the end of the day, we believe we live in a country of laws and regulations, and that projects like MVP that follow every required process and receive every required permit will, and have to, prevail,” Karam said.

The latest project timeline would see MVP resume construction by 2Q2023. The timeline is based on “interaction that we’re having with the agencies, which has been positive,” COO Diana Charletta said.

Asked about the potential for the Fourth Circuit to further scrutinize future MVP permits, Charletta pointed to a “narrower scope of issues” left to resolve, which could improve the chances of finally meeting the legal standard the judges have set.

“There’s no question that the court has departed from historical and judicial deference, but we’re also now dealing with a narrower scope of issues, one of which was just recently addressed by FERC,” Charletta said. “There are certain foundation aspects of the permits that were upheld, challenges to the route, ideological assessment framework for MVP’s action areas and basis for incidental takes.

“So while the agencies did do a much more substantive review in the last round, and exceeded regulatory and legal requirements under applicable laws, we believe the agencies now understand the need and are working to specifically articulate the legal rationale for their technical decisions.”

Karam pointed to a recent order by the Federal Energy Regulatory Commission approving changes to MVP’s waterbody and wetlands crossings as “an important step forward” for the project.

Karam also highlighted a shifting political landscape in the wake of Russia’s invasion of Ukraine. Lawmakers including Sen. Joe Manchin (D-WV) have made geopolitical arguments in favor of advancing domestic fossil fuel production and infrastructure projects.

Manchin “and others have consistently said that MVP’s role in our energy security and reliability is critical as we continue to work toward a lower carbon economy,” Karem said. “The current geopolitical unrest driven by the invasion of Ukraine by Russia has exacerbated the costs of a tight market, and will continue to do so for some time.”

Karem said, “We have remained in frequent contact with Sen. Manchin,” Sen. Shelley Moore Capito (R-WV) “and others, discussing the possible path to bring MVP into service…We appreciate the public support for the project and will remain engaged on all fronts.”