The long prospective Walker Ridge in the deepwater Gulf of Mexico (GOM) drew a bid of nearly $12 million on Wednesday in the final federal oil and gas auction of the year. 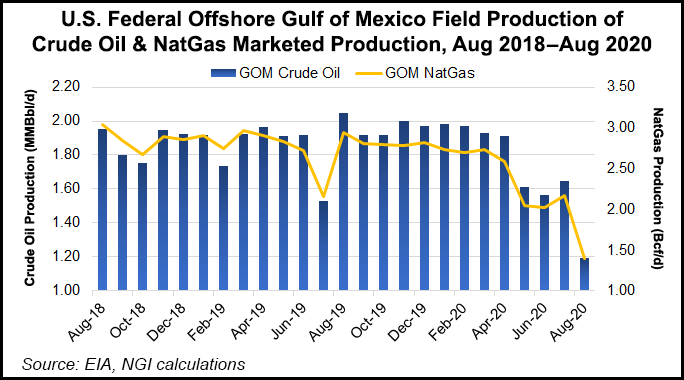 The bid of $11,999,979 for Walker Ridge Block 365 was made jointly by Repsol E&P USA Inc. and Equinor Gulf of Mexico LLC, units of the European-based supermajors.

The Trump administration’s final auction was live streamed from New Orleans and overseen by the Interior Department’s Bureau of Ocean Energy Management (BOEM).

Offshore oil and gas resources can take up to a decade to be developed, but BOEM officials are optimistic about what’s ahead for the industry. The average bid was $233/acre, versus $234 generated at the last auction in March.

“The Gulf has a long future,” said BOEM’s Mike Celata, regional director for the GOM region. “We still have a huge amount of resources.”

Only 23 producers participated in Lease Sale 256. The auction, originally scheduled for August, had been delayed by the impact of Covid-19.

BP Exploration & Production Inc. (BPEP) had the second highest bid of the day with an offer of $7.3 million for a block in Green Canyon. Equinor and Repsol shared the third highest bid, $4.9 million for another Walker Ridge block. And BP’s bid of $4.2 million for a Mississippi Canyon block rounded out the top five.

Based on the total bids received, the top 10 operators were led by Shell Offshore Inc., which submitted 21 bids totaling $27.9 million. Shell also led based on the sum of the bids at $27.88 million.

Of the total bids offered, EnVen Energy Ventures LLC was second with 13 bids totaling $7.7 million. Tied for third were BPEP and Chevron USA Inc. They each submitted 10 bids and each company’s total was about $17 million. Repsol’s nine bids were worth a total of $6.4 million, while Murphy Exploration & Production Co.’s eight bids totaled $5.3 million.

Equinor in all had seven high bids that totaled more than $22 million, and the operator was second only to Shell for the sum of the high bids at $22.16 million.

The lease sale was the seventh under the 2017-2022 Outer Continental Shelf Oil and Gas Leasing Program.

In related news, the Energy Information Administration (EIA) said the GOM during August had its largest monthly decrease in oil production since September 2008, with output down by 453,000 b/d, or 27%. Oil production totaled 1.2 million b/d in August, the lowest production rate in nearly seven years.

The regional decline was traced in part to the shut-ins from hurricanes Laura and Marco, beginning Aug. 22. Operators reduced output for 15 days. Marco, the weaker of the two, was first, which affected the magnitude and timing of shut-ins from Laura, EIA noted. Laura is considered the 10th strongest hurricane on record based on wind speeds.

The U.S. Bureau of Safety and Environmental Enforcement estimated that 14.4 million bbl of oil was curtailed over the course of 15 days because of the two storms. About 84% was shut-in at the peak because of crew evacuations, officials said.

EIA noted that to date this year, five hurricanes and one tropical depression have caused disruptions to oil production in the GOM.

BOEM has set the next region-wide auction, Lease Sale 257, for March. The sale also is to include all of the available unleased areas in federal waters of the GOM.