Supermajor Equinor ASA is not giving up on global natural gas and oil per se, but it is looking to give up control in Lower 48 projects and across the Americas as it optimizes the portfolio, executives said Tuesday. 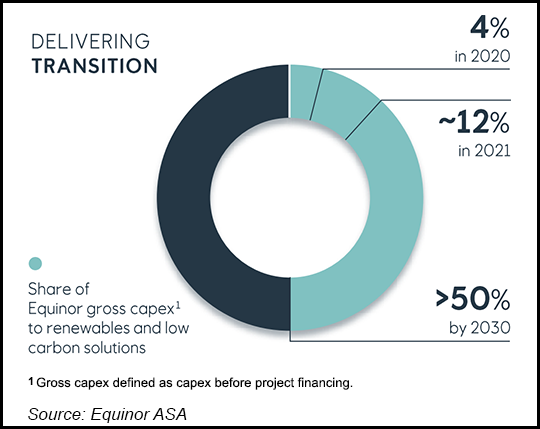 During the Capital Markets Day, the executive team laid out a strategy that overall is designed to target net zero emissions by 2050. More than 50% of gross annual investments by 2030 are to be directed to renewables and low carbon investments.

“Our strategy is backed up by clear actions to accelerate our transition while growing cash flow and returns,” CEO Anders Opedal said. “We are optimizing our oil and gas portfolio to deliver even stronger cash flow and returns with reduced emissions from production, and we expect significant profitable growth within renewables and low carbon solutions. This is a strategy to create value as a leader in the energy transition.”

“This is a business strategy to ensure long-term competitiveness during a period with profound changes in the energy systems, as society moves toward net zero,” Opedal said. “We are building on our position as a global leader within carbon-efficient production of oil and gas.

Equinor, under its former moniker Statoil, was one of the first European majors to place big bets on Lower 48 fields. Those days are long gone. The Bakken Shale assets were sold off earlier this year. In late 2019 Equinor sold operatorship of the Eagle Ford Shale joint venture to partner Repsol SA.

Giving up operator control is proving to be key for Equinor. The strategy unveiled for investors would hand off operatorship for other  Lower 48 unconventional assets, including the Utica Shale and Austin Chalk. Operatorship also could be handed off for its stakes in the Terra Nova field offshore Newfoundland, as well as interests in Argentina.

“That way we can enjoy regional expertise and economies of scale in a way we never could as an onshore operator,” said Equinor’s Al Cook, who took over in January as executive vice president of Exploration & Production International.

Opedal said reducing emissions is central to the strategy. “Significant growth within renewables and low carbon solutions will increase the pace of change toward 2030 and 2035.”

To finance the makeover, the oil and gas portfolio between now and 2026 is forecast to deliver free cash flow (FCF) after tax and investments of $45 billion. New projects coming onstream by 2030 should have an average breakeven below $35//bbl oil “and a short payback time of less than 2.5 years.”

There are many global opportunities that are not going away, particularly in the global offshore.

For example, on the Norwegian Continental Shelf, where Equinor is the primary producer, average annual FCF from 2021-2030 is forecast at around $4.5 billion. Improvements at the world-class Johan Sverdrup field should reduce the breakeven oil price by 25% to $15/bbl. It also operates the Hammerfest liquefied natural gas export terminal, which is undergoing repairs.

Also central to the portfolio is the deepwater Gulf of Mexico (GOM), where Equinor is one of the biggest operators. Equinor has stakes in 13 projects in U.S. waters that are either producing, in development or are discoveries. The GOM portfolio is expected to be cash flow neutral in 2021 at an average oil price of $30/bbl. The portfolio is forecast to provide 90% FCF growth to 2025.

Meanwhile, gross investments in renewables are set to be around $23 billion over the next five years. Plans are to boost the share of gross capital expenditures (capex) for renewables and low carbon solutions to more than 50% by 2030 from around 4% in 2020.

“Based on early low-cost access at scale,” Equinor’s share of installed renewable capacity is forecast at 12-16 GW by 2030. “Reflecting current markets levels, Equinor is adjusting expected project base real returns to 4-8% and remains determined to capture higher equity returns through project financing and farm downs.”

Among other things, Equinor expects to deliver nominal equity returns of 12-16% from the offshore wind projects with offtake contracts in the UK and United States.

Like its plans to move operatorship to partners, Equinor sold BP plc its partnership stakes to pursue offshore wind opportunities in the United States. The partnership initially intends to develop 4.4 GW gross with four projects. Two are being readied to provide New York with power, and three of the four “will have secured offtake,” BP CEO Bernard Looney said early this year.

For Equinor, the energy transition represents an opportunity to leverage its growing position in carbon management and hydrogen, as well as develop and grow value chains and markets. By 2035, the goal is to develop the capacity to store 15-30 million metric tons/year of carbon dioxide and to provide “clean,” i.e. blue and green, hydrogen in three to five industrial clusters.

To entice shareholders, the board approved a quarterly cash dividend of 18 cents/share for 2Q2021, which is up 3 cents sequentially. It also is planning to buy back $1.2 billion in shares starting in 2022.