Equinor ASA continued to advance its worldwide energy portfolio during 2020, with a long-term strategy set on becoming a net-zero emissions leader relying less on fossil fuels. 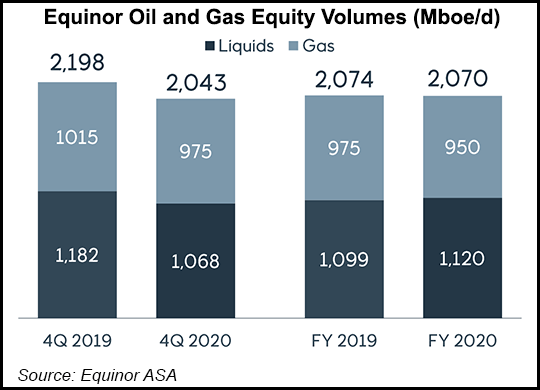 The management team held court with analysts and investors on Wednesday to share results for 2020 and the outlook going forward. Mirroring comments made by Big Energy CEOs during fourth quarter calls, CEO Anders Opedal acknowledged that last year’s operations were beaten down by the “market turmoil” brought about by Covid-19.

Still, the Norwegian operator captured “strong cost improvements and capital discipline” as the pandemic unfolded, helping to deliver more than $3.7 billion in savings. The gains from efficiencies and cost cuts, he said, were “well above our ambition for the action plan we launched in March to strengthen financial resilience.”

The natural gas arm had an up-and-down year.

Natural gas sales volumes totaled 15.0 billion cubic meters (Bcm) in the fourth quarter, down year/year by 0.9 Bcm. Of the total gas sales in the final three months of 2020, entitlement gas was 13.2 Bcm, off 0.4 Bcm from a year earlier.

The decline in gas sales, which are overseen by the Marketing, Midstream and Processing segment, was attributed to the absence of equity liquefied natural gas (LNG) volumes following an outage last year at the Hammerfest LNG plant.

The northern Norway plant was severely damaged following a fire last September, and it is expected to take at least a year to repair.

Meanwhile, liquids sales climbed year/year in 4Q2020 by 12.8 million bbl to 184.1 million bbl. The gains were attributed to increased purchases from third parties.

U.S. investors may have been keyed on Equinor’s reveal that it has sold the Bakken Shale portfolio in North Dakota and Montana for around $900 million to Encap Investments-backed Grayson Mill Energy. The transaction covers the entire 242,000 net acres and associated midstream assets.

Bakken production in 4Q2020 was 48,000 boe/d net. In parallel, Equinor Marketing and Trading has a term purchase agreement to offtake crude with Grayson.

“By divesting our Bakken position, we are realizing proceeds that can be deployed toward more competitive assets in our portfolio,” Opedal said. Equinor has improved the safety, cost efficiency and carbon dioxide (CO2) intensity of the Bakken portfolio, “and I am confident Grayson Mill Energy will continue on this path.”

Beyond the Bakken, average U.S. liquids and gas production during 4Q2020 was 390,000 boe/d, compared with 437,000 boe/d in 4Q2019. The decrease followed the sale of the Eagle Ford Shale portfolio during 2019, as well as planned maintenance and Gulf of Mexico hurricane shut-ins from the U.S. offshore business.

In Norway, production volumes from the Johan Sverdrup oilfield, which came onstream last October, are rising. By mid-year, the field should be producing 535,000 b/d. Equinor, which has made reducing CO2 emissions a priority across the portfolio, said the oilfield is forecast to emit carbon at “only 4% of the world average.

“We are increasing production volumes from Johan Sverdrup even further, and we used our flexibility to have high gas production as gas prices increased in the quarter,” Opedal noted. In addition, production ramped up in December from the Snorre Expansion in the North Sea earlier than expected. Snorre is forecast to add almost 200 million bbl of oil reserves and extend the productive life of the field through 2040.

Meanwhile, results in Equinor’s international exploration and production (E&P) results were impacted not only by low prices but also a $980 million impairment of the long-delayed Tanzania LNG project. Equinor, which is leading the project with partners ExxonMobil, Ophir Energy plc, Pavilion Energy pte Ltd. and Royal Dutch Shell plc, expects to begin construction in 2022.

“During 2020, we delivered significant progress in our renewables portfolio, taking the investment decision for Dogger Bank A and B, winning the largest ever offshore wind award in the U.S., starting construction at Hywind Tampen and capturing value from transactions,” Opedal said.

The Dogger Bank, off the coast of England, as designed would be the world’s largest offshore wind farm. Each of three phases are set to have installed generation capacity of up to 1.2 GW. Combined, they would have an installed capacity of up to 3.6 GW and be capable of powering up to six million homes.

In the United States, Equinor has partnered with BP to develop offshore wind projects, including leases on the East Coast. As part of the collaboration, BP is purchasing a half-stake from Equinor in both the Empire Wind and Beacon Wind assets for $1.1 billion.