Norwegian state player Equinor ASA logged lower overall U.S. oil and natural gas production in 2Q2021 primarily because of its recent Bakken Shale exit, but that decline was offset by growth in the gassy Marcellus Shale. 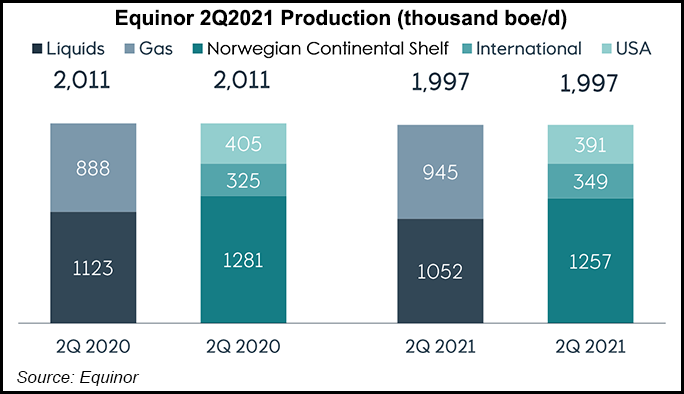 Average daily equity production of liquids and gas was 391,000 boe/d in 2Q2021 compared with 405,000 boe/d in the same period a year ago. In addition to the Bakken divestment, the lower production figure was driven by “slightly lower” U.S. offshore production because of natural declines in the Gulf of Mexico.

The U.S. unit also got a boost from higher commodity prices, with North American gas fetching an average $2.25/MMBtu for the quarter, a 53% improvement over prices last year.

CFO Svein Skeie told analysts the company’s Marketing, Midstream and Processing arm was also able to generate an “extra profit” in trading its U.S. natural gas as prices improved. The company also was able to move its product to market on existing infrastructure despite a number of high-profile pipeline delays.

“It also shows the value of having the value chain focused on totality,” Skeie said, noting the company’s capacity to transport gas to Manhattan and to Toronto, “which we are now gaining on as a company.”

The U.S. operations also saw a decline in operating costs largely because of the Bakken divestiture. However, it also recorded an $11 million impairment related to its U.S. offshore leaseholds.

For all its segments, Equinor reported total equity production of 1.997 million boe/d in 2Q2021, down from 2.011 million boe/d a year ago. A high rate of planned maintenance, the Bakken deal and the continued shutdown of the Hammerfest LNG plant in Norway were behind the decline, Equinor said. However, higher “flex gas volumes to capture higher prices” and increased production from the offshore Norway Johan Sverdrup field offset the declines.

The company is aiming to keep production relatively flat. It expects 2021 output to increase by 2% over 2020 levels.

The results of all the company’s exploration and production segments were “positively impacted” because of higher commodity prices, Equinor said.

Equinor also said its renewable energy production for the quarter was down year/year, from 304 GWh to 282 GWh, because of lower winds.

The company reported 2Q2021 net income of $1.943 billion, an improvement over $1.854 billion in the first quarter and a net loss of $251 million in 2Q2020. Equinor attributed the increase to higher commodity prices and a “net reversal” of impairments compared with net impairment losses a year ago.