EQT Corp. has agreed to buy out Appalachian competitor Rice Energy Inc., an estimated $8 billion transaction that would create the largest natural gas producer in the country. 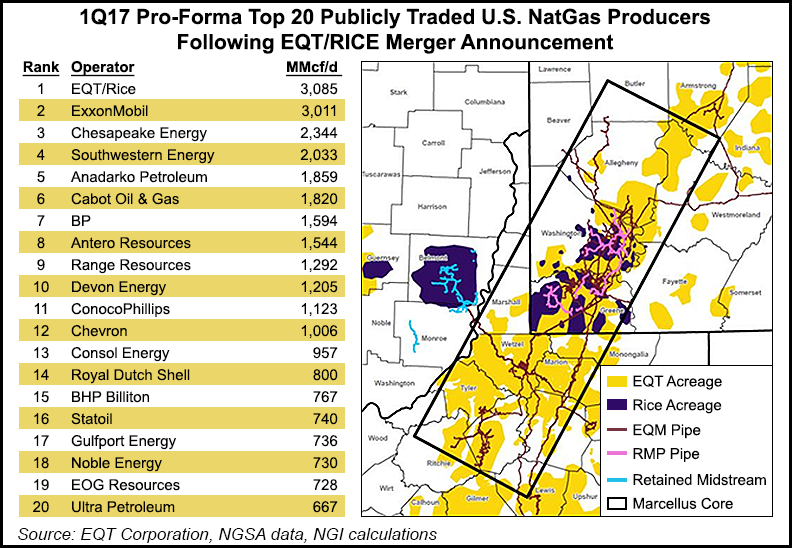 Combined, EQT and Rice produced 3,085 MMcf/d pro-forma in 1Q2017, enough to overtake ExxonMobil Corp. (3,011 MMcf/d) as the top producer for the quarter, according to Natural Gas Supply Association data and NGI calculations.

EQT estimated that its current average gas output of 1.3 Bcfe/d would triple to 3.6 Bcfe/d after the transaction.

In a conference call Monday to discuss the deal, EQT CEO Steve Schlotterbeck emphasized that the consolidation would result in longer laterals and greater operational efficiencies, especially in Southwest Pennsylvania where the companies’ acreage positions most overlap.

“The synergies from this acquisition are really focused in Greene and Washington counties, where we have very significant overlap in amongst the very best acreage in the Marcellus play,” he said. “So I think it’s likely that you will see a strong capital allocation” in 2018 “to those areas where we will drill the 12,000-foot-plus laterals and have the highest returns.”

Under terms of the transaction, which is set to close in the fourth quarter, EQT would acquire Rice for $6.7 billion and would assume or refinance $1.5 billion of Rice’s net debt and preferred equity.

EQT agreed to pay $5.30 in cash and trade 0.37 shares of stock for each Rice share, an implied value of $27.04/share for Rice as of last Friday (June 16). EQT shareholders would own 65% of the combined company, and Rice would nominate two directors to the board. EQT also plans to issue $5.4 billion in equity and pay $1.3 billion in cash to finance the transaction.

Schlotterbeck said the combined company would be able to achieve the same growth rate with roughly 7% less capital compared to the two companies operating separately. He described a post-merger EQT positioning itself to be a leader in a new era of Appalachian shale development, perhaps breaking from the recent history of EQT and Rice as high-growth producers.

“It is my belief that we are in the second phase of the shale gas revolution, and the high-growth models of the first phase I don’t think are going to work in the next phase. We really need to be focused on creating real value and getting that value directly back to shareholders. I think the way that will play out, particularly after this acquisition…is we will have to determine what the appropriate growth rate is.

“…I’m a strong believer that the grow-as-fast-as-you-can-at-any-cost model, while probably necessary early in the shale revolution, doesn’t work anymore and isn’t going to work anymore. For a company our size, that’s far too risky of a strategy.”

Since the start of 2016, Schlotterbeck said, EQT has added more than 485,000 acres to its development portfolio, achieving “significant scale in the core of the Marcellus.”

The plan now is to shift the focus from acquisitions to integration, by improving well efficiencies through longer laterals and reduced operating costs, according to management.

While its 2018 plans are still preliminary, Schlotterbeck indicated the producer would continue to develop its assets in the Utica Shale in Ohio and in the liquids-rich Marcellus in West Virginia. EQT would also likely drill some Upper Devonian wells, which he said would enjoy “significantly better economics” from the combined company’s ability to drill longer laterals.

Schlotterbeck said lease operating expenses (LOE) for the combined company should decline by more than 20% per unit from a level that was “already pretty low.” He pointed to “synergies from the scale and the overlap of operations, and some of the benefits that we’ll get on water logistics, people having to move smaller distances. This is a perfect fit for our existing position, so we’ll generate a lot of ongoing efficiencies on the LOE side.”

Rice CEO Daniel J. Rice IV said the combination of the country’s “largest, lowest-cost, and most responsible natural gas producers creates an unparalleled leader in shale gas development that will benefit the environment and our shareholders for many decades to come.”

Like EQT, Rice has been acquisitive. Only last month its management team unveiled a three-year growth plan that called for producing up to 2.2 Bcfe/d by 2019. Last fall Rice paid $2.7 billion to take over Vantage Energy Inc. subsidiaries that not only expanded its Appalachian holdings but gave it entry into the Barnett Shale in North Texas. Vantage had been Greene County, PA’s largest leaseholder. And in February Rice added 100,000 net acres to its Appalachian core.

Once the transaction is completed, EQT would have a total net acreage position of 670,000 acres in the Marcellus Shale, 149,000 in the Upper Devonian, 616,000 in the Pennsylvania/West Virginia portion of the Utica Shale and 65,000 in Ohio’s Utica. EQT also would pad its undeveloped locations, giving it a combined 3,700 in the Marcellus, 955 in the Upper Devonian, 3,680 in Pennsylvania/West Virginia Utica and 280 in the Ohio Utica.

Analysts with The Williams Capital Group LP estimated an average price per undeveloped acre for the transaction of $9,900, “which is roughly in line with core acreage valuations over the past year.” Analysts with Bernstein similarly calculated a per-acre price of around $9,000.

As part of the transaction, EQT also would obtain Rice’s midstream properties, which include a 92% stake in Rice Midstream GP Holdings LP, which owns 100% of the general partner and 28% of the limited partner interests in Rice Midstream Partners LP. The retained midstream assets are to be sold to EQM in drop-down transactions.

“The next wave of efficiencies will come from consolidation of the scattered acreage positions in Appalachia,” he said at the time. “This consolidation will drive longer laterals, more wells per pad, improved water and operating logistics and more efficient gathering and transmission pipelines.

EQT and Rice shareholders still need to approve the transaction, which is also subject to customary regulatory and closing conditions.