Bending to the war chest it has accumulated in a series of acquisitions across the Appalachian Basin and the will of shareholders that expect more value from it, EQT Corp. on Wednesday highlighted a plan to dump all of its midstream assets into a separate publicly traded company. 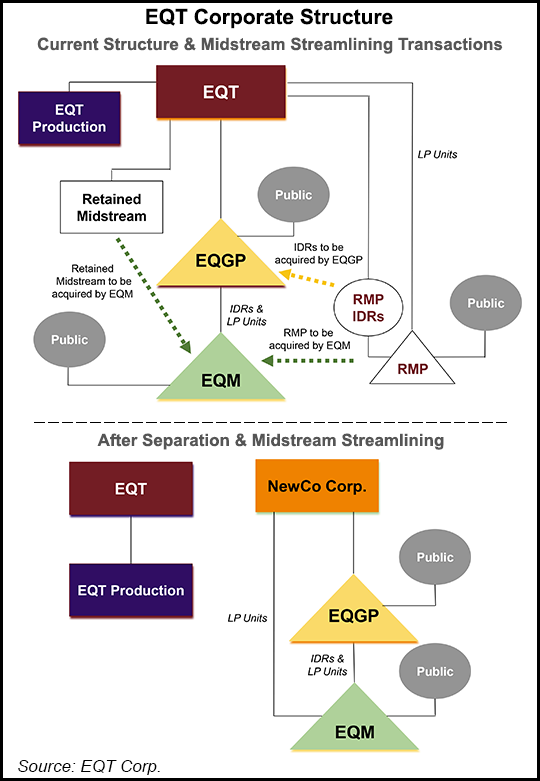 The deal follows last year’s $8 billion acquisition of Rice Energy Inc. that added more than 200,000 Appalachian acres and a trove of associated midstream assets, including Rice Midstream Partners LP (RMP). Through several more unrelated transactions in 2017, EQT added another 110,000 acres. Now the nation’s largest natural gas producer, churning out about 4 Bcfe/d, some investors had been pushing the company to split its upstream and midstream businesses to sap more value from the various parts.

“As a result of the consolidation strategy we’ve been executing on, the benefits of integration have diminished quite a bit, and the ability for both businesses to be strong competitors on their own has increased dramatically,” CEO Steven Schlotterbeck said during a call with financial analysts to discuss the company’s plans. “The Rice transaction really was the perfect catalyst for addressing this sum-of-the-parts issue that we’ve had for a number of years.”

EQT plans to separate the midstream and production businesses in a complex tax-free spin-off for its shareholders. Under the plan, which is contingent on myriad regulatory approvals, EQT shareholders would retain their shares of the company’s stock and receive a pro-rata share of the new independent midstream company.

Basically, that new company would consist of EQT Midstream Partners LP (EQM) and Rice Midstream Partners LP assets, along with the midstream assets that have been retained by EQT. EQM would operate them under a different corporate structure and remain a publicly traded company. Schlotterbeck would continue to lead the upstream business, while EQM COO Jerry Ashcroft would become CEO of the new midstream company.

“On the midstream side, the system now, especially once it’s combined with RMP, has a very — I think — enviable position across the core of the southwest Marcellus. It’s going to be able to compete very well,” Schlotterbeck said. “And frankly, the options for EQT upstream to use other midstream providers is going to be fairly limited because those two systems, the Rice and EQT systems, have the backbone and header system that overlays the acreage where the upstream business is going to be focused for quite a few years.”

The new company would have a 246,000 acre dedication in the core of the Marcellus Shale and a 166,000 acre dedication in the Utica Shale of Ohio. It would become the third largest natural gas gatherer in the country, according to EQT, which does not intend to modify its existing gathering and transmission contracts with EQM. Management said EQM would likely continue to gather most of EQT’s production going forward given the size and location of the system.

However, before the new company can be spun-off, multiple transactions will have to be completed. For example, EQT has to dropdown its retained midstream assets to EQM. Additionally, EQM would have to merge with RMP.

As financial analysts pointed out, those kinds of aspects present uncertainties for the overall proposal, but EQT expects to have them finished and the companies split by the end of 3Q2018. “We’ll be completing the separation with the utmost urgency and consideration,” Schlotterbeck said.

EQT’s announcement also signals another shift in the evolution of shale development. The company’s competitors have long espoused combined midstream and upstream companies and their abilities to create efficiencies for both segments.

“I think what we’ve concluded is that for us, it is no longer the case. I agree 100% that in the high-growth era, as the assets were being tested through new drilling and as gathering systems were being built-out, that we gained a lot of efficiencies and created a lot of value through integration,” Schlotterbeck said. “But, where we stand today, especially after the acquisition of Rice, we know the upstream assets really well.

“So, we can plan our development a lot better than we could a few years ago, which means we can contact midstream services in a more thoughtful and proactive way than we could in the past.”

As EQT has grown, so too has its balance sheet. The company currently reports financial results through five business segments comprised of production and midstream assets. The separation, management said, would not only simplify that, but better help investors align their cash with companies that have “distinct strategic goals and incentives.”

All the details of the transaction are still being worked out and management couldn’t say when it might start buying back shares or even if a dividend would be established. More information is expected to be released in the coming months. EQT’s stock fell more than 3% on Wednesday to close at $49.81/share.

But some of the investors that pushed the company to split the businesses, such as hedge fund D.E. Shaw & Co. LP, which owns about 4% of shares, welcomed the plan.

“By moving ahead with the tax-free spin-off of the midstream business and merging EQM and RMP — following the previously announced addition of two new directors with midstream experience — we believe the company has put itself on the best path forward for itself and all shareholders,” said D.E. Shaw portfolio manager Quentin Koffey.