EQT Corp. is planning more drilling and completion activity this year in West Virginia, where it will focus on lowering well costs in a state that’s home to a large chunk of its assets. 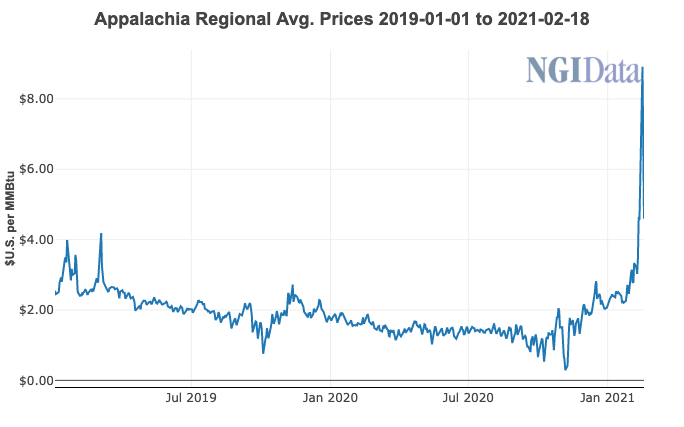 “I think when you step back and look at the assets that we have, about 40% of our leasehold is in West Virginia,” said CEO Toby Rice during a call on Thursday to discuss year-end financial results. “So, it makes sense for us to start shifting some of our development to that area.”

Rice said longer laterals will help drive down well costs in West Virginia, where horizontals are planned to average 15,100 feet this year compared to 11,630 feet in Pennsylvania, which is where the bulk of the nation’s largest natural gas producer’s operations are located. The company assumes that the cost of Marcellus Shale wells in West Virginia will average $775 per lateral foot in 2021, compared to a cost of $675 per lateral foot for Marcellus wells in Pennsylvania.

Fourth quarter production came in at 401 Bcfe, compared to year-ago volumes of 373 Bcfe. The year/year gain was mainly driven by the company’s $735 million acquisition of Chevron Corp.’s Appalachian assets in Pennsylvania and West Virginia, which accounted for 12 Bcfe of 4Q2020 sales volumes.

Full-year production came in at 1.498 Tcfe, down from 1.508 Tcfe in 2019 due to production curtailments and asset divestitures.

The company also reported $325 million of positive free cash flow (FCF) and expects to generate up to $600 million of FCF this year.

EQT reported fourth quarter net income of $64 million (23 cents/share) compared to a net loss of nearly $1.2 billion ( minus $4.61) in the year-ago period, when it reported higher impairments.