The amount of U.S. natural gas gaining a certification designation is moving up, with Appalachian pure-plays EQT Corp. and Seneca Resources Corp. each gaining the designation for supply. 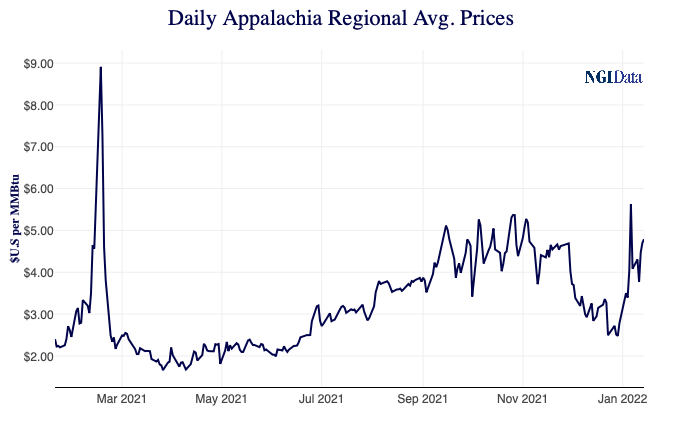 EQT, the largest U.S. gas producer, said 80% of its supply has been certified, giving it a potential leg up for premium pricing. EQT, which produced an estimated 5.6 Bcfe/d during the third quarter,  said most of the Marcellus and Utica shale output achieved the certification label last November under standards set by Equitable Origin (EO) and MiQ.

“These results not only enable us to unlock growing domestic and international markets that are valuing a differentiated commodity, they also serve as an important validation of the environmental attributes of Appalachian natural gas,” said EQT CEO Toby Z. Rice.

EQT last April said it was working to ensure most of its Appalachian Basin supply was responsibly sourced. The Pennsylvania-based exploration and production company’s total output “now comprises 4.5% of all natural gas produced in the U.S.” The certifications “provide a transparent, verified method” to track environmental, social and governance (ESG) commitments. The goals include reducing direct and indirect greenhouse gas emissions (Scope 1 and 2), and reducing EQT’s methane emissions intensity by 65% by 2025.

The EO100 Standard for Responsible Energy Development process focused on the ESG performance, while MiQ verified the methane emissions.

EQT achieved “the highest initial certification score ascribed” by EO “to any upstream producer domestically or abroad to date, reflecting EQT’s commitment to being the operator of choice for all of its stakeholders,” EO noted.

“The certification standards developed by MiQ and Equitable Origin aim to bring transparency to an opaque market, drive demand for certified natural gas and help operators differentiate themselves through methane-emissions performance and overall responsible energy production.”

The first block of EQT’s certified gas is available for trading on MIQ’s Digital Registry. The Digital Registry, which launched in December, is a global digital ledger in which joint MiQ-EO100 certificates are held from the time they are issued to retirement.

One certificate is issued per MMBtu of certified natural gas. Certificates may be traded bundled, i.e. combined with natural gas delivery, or unbundled, which EO said is designed for “massively increasing the potential for significant liquidity in the markets.”

Seneca, the exploration and production (E&P) arm of National Fuel Gas Co. (NFG), earlier this month said 100% of its 1 Bcf/d gross output had been deemed certified under the EO100 performance targets.

The EO designation “validates our long-standing culture and history of environmental responsibility and community engagement,” Seneca President Justin Loweth said. “We will continue to embrace new technologies and implement best practices in order to remain on the leading edge of the industry’s sustainability initiatives.

“In addition, as we look ahead, we expect that the certification of Seneca’s entire Appalachian natural gas base will differentiate our responsibly sourced, low methane-intensity production with end-users and commercial markets.”

Seneca explores for natural gas and oil in the Marcellus and Utica shales, as well as in California. Seneca produced 83.1 Bcfe during the fiscal third quarter, up 48% year/year. The producer attributed the sharp increase to its acquisition in 2020 of 450,000 net acres in Pennsylvania from Royal Dutch Shell plc. In preliminary guidance for fiscal 2022, Seneca said it expects to produce 335-365 Bcfe, which would be 25 Bcfe higher than the midpoint of guidance for 2021.

NFG, whose footprint extends across the country, last September ​​set a goal to lower its carbon footprint in 2030 by double-digits across the E&P, midstream and utility segments. For the consolidated company, NFG plans to reduce total greenhouse gas emissions by 25% by 2030.

For the E&P segment, a 40% reduction in methane intensity is planned by 2030.

The gathering arm and the utility unit have each set a methane intensity reduction target of 30% by 2030. In the pipeline and storage segment, the plan is to cut in half the intensity target reduction.